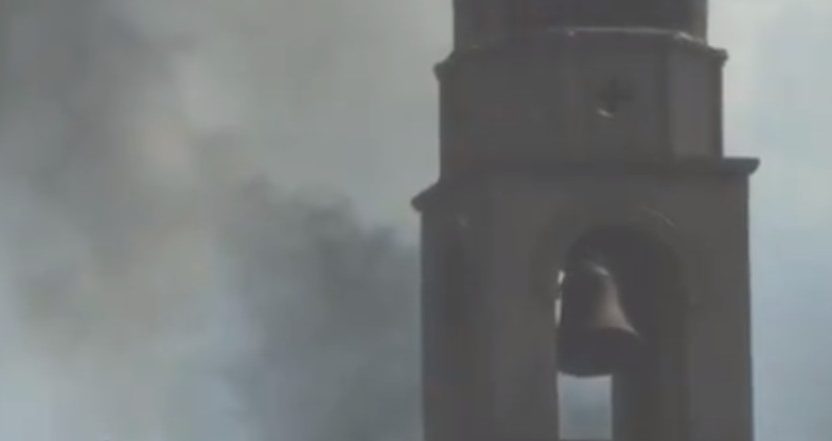 Daenerys Targaryen and her dragon are perched on the walls of King’s Landing. Behind her lay the smoldering ashes of the Iron Fleet, the Golden Company, and any idea of the Lannisters defending the capital. Below Dany, her assembled forces are holding what’s left of the Lannister army at swordpoint.

In the Red Keep, Cersei is withdrawing into a fugue state, clinging to those hopes Dany has just burnt to ash. Her Hand, Qyburn, is trying to convince her that the battle’s already been lost. Tears stream down Cersei’s face as her people cry out: “Ring the bells!”

It was a pivotal moment—no, the pivotal moment—for “The Bells,” the penultimate episode of eight seasons and eight years’ worth of Game of Thrones. And they effed it up.

Shockingly, the bells did ring—signalling, as Tyrion informed us and then reminded us about 128 times—the Lannisters’ surrender of the city and kingdom. It was shocking not just because Tyrion was right about something for the first time in years, but because it pulled a happy ending out of a very Thronesian no-win situation.

And then Daenerys burned everybody anyway.

When Dany heard the bells ring…. Hold up wait a minute @MeekMill pic.twitter.com/0KIYnBnrVu

Since the episode’s airing, the Internet has been ablaze with takes about Dany’s heel turn. It was the undoing of a feminist-rage icon: Dany’s suddenly all-male advisors undermining her, betraying her, gossiping about her emotional “state of mind.” It was a Season 7-style ‘twist’, breaking characters and abandoning storylines for the sake of getting one over on the audience. Or maybe showrunners David Benioff and Dan Weiss just botched the telling of a story beat they’d spent a decade building toward? It’s certainly not the first time the show’s decisions haven’t worked well for the audience.

Any and all of those things could be true. The fix, though, would have been shockingly easy: Just don’t ring the bells.

The bells were an invention of the episode. We didn’t know anything about them or how they worked. Who physically rings the bells? Who makes that call? When the bells start ringing, apparently of their own accord, Cersei looks as surprised as anybody. Wouldn’t she have final say?

Tyrion: if you hear the bells ring they’ve surrendered

Jon: you just… made that up, like just now

All of Season Seven and Eight of Game of Thrones have drawn Cersei as an increasingly paranoid and delusional figure. There was the frankly stupid attempt to convince her the Night King and his army of the dead posed an existential threat to all seven kingdoms, which resulted only in her smiling and saying “good” when she heard he’d breached the Wall. We saw her be irrationally upset about the Golden Company not sending elephants, place her trust in Euron Greyjoy as an advisor and partner, and her safety in the hands of the maniacal Qyburn and undead The Mountain.

Most importantly, we’d just seen her insist that her army would outfight Dany’s looming hordes just as her army as about to flat-out quit. Since the writers were making up the rules here, they might as well put that power in Cersei’s hands. She’d already fallen into madness and delusion as her life and kingdom turn to ash around her. She’d already refused to acknowledge that she’d lost. Why not just have her refuse to ring the bells?

Back in that moment, we see Dany atop Drogon atop the walls of the city, her enemies defeated, the people in the streets begging for surrender, everything she’s ever wanted right there in front of her—and Cersei, lost in her own madness, won’t hand it over.

Instead of the sound of the bells inexplicably sending Dany over the edge, it would be the silence ringing in her ears. Her rage at one last betrayal, at being forced to take the path of blood and ash to the Iron Throne. It would feel like plenty of motivation for Dany to spur her dragon on. They wouldn’t have needed to change a frame of Emilia Clarke’s excellent acting, just the sounds echoing over it.

The showrunners’ prescient choice to show us the siege at street level would have done the rest of the work. Jon Snow would still begin the fight as a shocked-but-willing participant, and still be horrified out of it by all the flames and slaughter. Arya’s journey through the streets, Cleganebowl, Jaime and Cersei’s death, none of it had to change at all.

The people of King’s Landing would be no less afraid of their new Mad Queen knowing their old one goaded her into it. But if the showrunners absolutely had to show her doing unforgivable evil, perhaps they could have rung the bells after the sacking had already begun. Maybe someone loose in the streets, like a Jaime or Arya, could have pulled a Pippin-style sneak up a sept tower to ring one bell in hopes they all followed. Then Dany, already burning innocents and razing city blocks, could have ignored the bells.

Either way, Dany would still end up “Queen of the Ashes,” no less twisted or desperate in her isolation. But her final steps down that path would have been keeping with all the steps before it: Every time she’d gruesomely executed someone or set a bunch of stuff on fire, she’d believed it was the only choice she had.
But by giving her a choice between the victory she’d already earned and the slaughter her ancestors were famous for, Benioff and Weiss robbed us of the ability to believe in her long-foreshadowed turn to villainy.