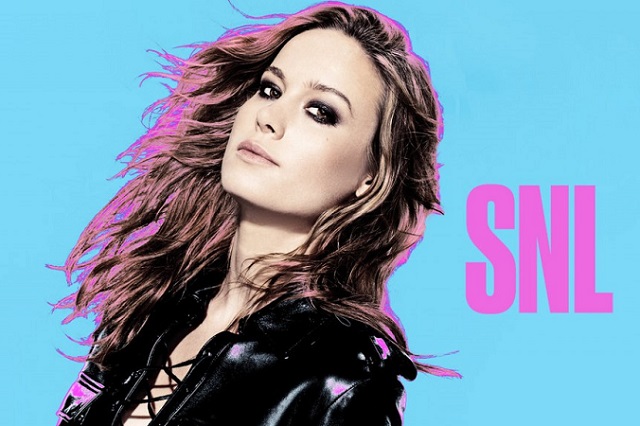 Saturday Night Live is now in the home stretch of season 41 with the first of its final three episodes in the books, and if this episode is any indication it could be a strong finish for SNL. Outside a couple of hiccups, including a rough Weekend Update, it was one of the better episodes from the past couple months, helped out by a great performance from first-time host, Brie Larson.

Viewers who only knew Larson from her Oscar-winning performance as “Ma” in the dark and traumatic Room may have been surprised at how well she handled herself. However, long-time fans of the actress knew that before turning to more dramatic fare in recent years, she was making a career appearing in comedies on both the big and small screens. This background seems to have helped Larson join the ranks of Ariana Grande and Peter Dinklage as unexpected great first-time SNL hosts this season.

Whether it was the material, the studio audience, or SNL using an almost 30 year-old character, this cold open was a complete bomb to start the show. Dana Carvey may be one of the greatest cast members ever, but using tired jokes about Madonna and Beyoncé, calling Ted Cruz “Satan,” and then bringing out Donald Drumpf (Darrell Hammond) just did not work.

When Ryan Gosling hosted in December, a lot was written about the “Alien Abduction” sketch and Gosling’s inability to keep a straight face while Miss Rafferty (Kate McKinnon) recalled her vastly different encounter with the aliens. If you thought that sketch was only memorable due to Gosling breaking, the latest appearance of Mrs. Rafferty proves that McKinnon is SNL’s best performer as she recalls the traumatic handling of her soul by angels.

For the record, Larson had no issue keeping it together during this sketch. But the same could not be said for Aidy Bryant and Bobby Moynihan, who once again lost it on-screen, thanks to McKinnon.

It’s always amazing how accurate the Good Neighbor sketches can be, whether it’s the Inside SoCal guys or their take on 90s sitcoms, and this Kickstarter campaign video from Chris Fitzpatrick (Kyle Mooney) for his nu metal band is no exception. Search Kickstarter, and you’ll find an endless supply of poor quality videos with very high goals, weird rewards, and no chance of ever being funded.

As I mentioned in the introduction, this was a rough Update. All three of the guests this week — Laura Parsons (Vanessa Bayer), Sasheer Zamata, and Pete Davidson — kind of fell flat, with Zamata completely stumbling her way through her segment. The highlight, if there was one, was the first three minutes when Jost and Che discuss Drumpf’s nomination and his dumb Cinco de Mayo tweet.

Cruz has been the butt of many jokes this season, and this one might be the best. It didn’t feature Taran Killam’s Cruz impression, or even a picture of the man, but just four minutes of build-up to a great punchline. This sketch also wins points for continually mentioning how futuristic two years from now will be, and giving us the name Crichard.

Brie Larson, Pete Davidson, and Kate McKinnon all had their moms appear during Larson’s monologue. Davidson’s mom also made an appearance during Update, and had more airtime than Jay Pharoah, who only appeared as Tupac Shakur in the “Dead Bopz” sketch.

During SNL‘s April break, it was announced that the show will have two fewer commercial breaks next season. Also, the show will give advertisers the opportunity to create commercials that tie in to the show six times a season. Oddly enough, two advertisers, Old Navy and Pizza Hut, ran commercials starring former and current SNL cast members during this episode.

Saturday Night Live returns on May 14 with host and musical guest Drake.