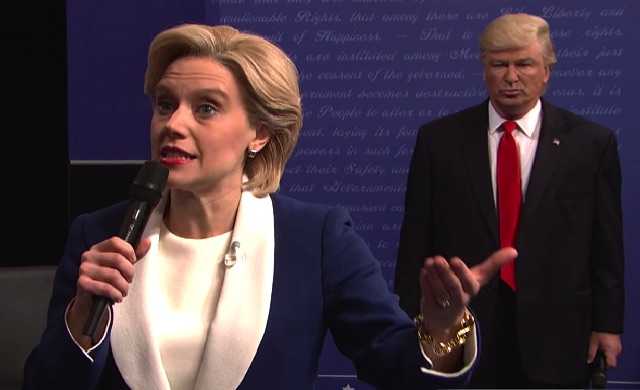 Helped by a presidential campaign that has at times seemed like a comedy sketch, and two hosts (Margot Robbie and Lin-Manuel Miranda) with rabid fan bases, Saturday Night Live is off to its best start, ratings-wise, in nearly a decade. The first two episodes of season 42 might also be two of the better ones SNL has aired over the past three seasons, making SNL must-see TV once again.

Emily Blunt may not have the same fan base as Robbie or Miranda, but the first-time host tried to hold her own with the odd sketches that appeared during this episode. While not an awful episode, this one was a definite step back from the first two of the season. It may have been the weirdness that was apparent throughout this week’s sketches, but this episode didn’t seem to click with the studio audience. The show should have no trouble getting back on track next week with host Tom Hanks.

SNL teased the appearance of Alec Baldwin as Donald Trump in a commercial airing this week where they dubbed the second presidential debate as “Round 2.” Once again, they hit on all the points that made the rounds on Twitter from Trump lurking behind Hillary Clinton (Kate McKinnon) throughout the debate to this week’s internet sensation, Ken Bone (Bobby Moynihan). If SNL continues to parody the aspects that become viral during the week, they’ll have no problem having funny cold opens for most of this season.

Before the end of last season, SNL announced that the show would have fewer commercials, replaced by “branded content” sketches for season 42. We may have seen our first branded commercial with this weird, funny sketch about an art collective that can’t seem to decide between the Whopper and the Angry Whopper, and the regular Chicken Fries or Cheetos Chicken Fries. All of these are actual menu items at Burger King, and were described in detail by Pete Davidson as a Burger King employee.

Maybe the most normal sketch of the evening was this film festival Q&A where Vanessa Bayer ended up being the only member of the audience who didn’t work on the short film, “Qua,” that was featured. Bayer always shines as the straight person on SNL, and this sketch was no exception. Personal note: I live near Ann Arbor, and have attended events there that were eerily similar to this sketch. I’m sure people from other college towns can also relate, but this one hit really close to home.

This was the weakest Weekend Update of the short season with many jokes from Michael Che and Colin Jost falling flat, including two from Che that elicited some shocked moans from the audience. Even guests Olya Povlatsky (McKinnon) and Laura Parsons (Bayer) couldn’t save this Update that didn’t really capitalize on a crazy week of politics.

Through two episodes, SNL had yet to feature a commercial parody, but they made up for it with this perfect parody of women’s clothing lines and their unusual names. Bonus points to anyone who noticed Aidy Bryant’s “fuck off” during this sketch.

** Blunt turned the tables on McKinnon by getting her to “break” during the Honda Robotics sketch by asking her if she wanted a quesadilla while standing within inches of her face.

You'll just be that guy with the weird hair. #Melanianade pic.twitter.com/Jd5d09PnJ4

** This episode featured two Melania Trump (Cecily Strong) sketches, including another “Melania Moments” and a parody of Beyonce’s “Lemonade” called “Melaniade.” “Melania Moments” has appeared in all three episodes this season.

** SNL seems to have a lot of confidence in new cast members Mikey Day and Alex Moffat because both have appeared consistently throughout the first three episodes, and Day may have the most screen time of any cast member this season.