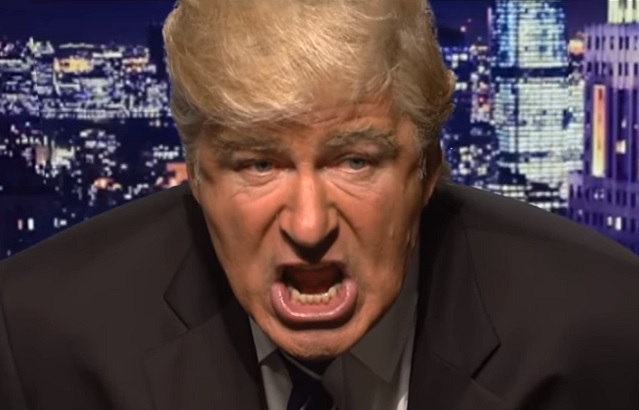 Lin-Manuel Miranda was definitely asked to host solely for his mammoth, award-winning (12 Tonys, a Grammy, a Pulitzer) musical, Hamilton. The hip-hop musical about Alexander Hamilton is the hardest ticket on Broadway with Miranda seemingly at the White House every week, but he’s still somewhat unknown to most of the country because Hamilton itself has been seen by so few people. It’s not a summer movie that’s made $300 million, a TV show with a few million viewers each week, or even a platinum-selling album. Hamilton is a Broadway musical that is performed in front of roughly 1,300 people.

Having Manuel as host might have been a minor gamble for SNL. Manuel himself noted that no one would know him in his monologue, but it paid off as he held his own. The latest Trump scandal fueled the cold open and Weekend Update, but overall, this episode was an interesting mix of political, musical, and multi-cultural sketches that mostly worked.

We’ll probably never know what SNL had lined up for their cold open this week, but the leak on Friday of a lewd discussion between Donald Trump and Access Hollywood‘s Billy Bush from 2005 most likely led to a change in plans. The cold open started with the vice presidential debate between Mike Pence (Beck Bennett) and Tim Kaine (Mikey Day) before it was interrupted by breaking news, with Alec Baldwin returning as Trump and hitting on all the low points of the previous 24 hours. One thing is clear, Baldwin’s impression of Trump is going to focus on three things: hand gestures, weird facial expressions, and mispronouncing words.

Best Sketch: A Day Off With Kellyanne Conway

This sketch comes off as slightly sympathetic to Kellyanne Conway (Kate McKinnon), and her seemingly torturous position as spokesperson for the Trump campaign. McKinnon nailed this portrayal of Conway with her serpentine delivery of spinning every ridiculous statement uttered by Conway’s boss.

Sometimes the best sketches SNL produces aren’t the over-the-top, laugh-out-loud ones, but the quiet, well-written, beautiful little bits like “Diego Calls His Mom.” Diego (Miranda), speaking in both Spanish and English, calls home from a phone booth in North Dakota, and tells his mom about food, racism, and a lot about his new friend, the star football player.

The internet will be abuzz with the appearance by Jimmy Fallon and Tina Fey as two undecided voters from Philadelphia, but it was hindered by Fallon’s inability to be somewhat serious, and a weak attempt to shrug off his moment with Trump a few weeks ago on The Tonight Show.

Jost and Che, on the other hand, spent most of Update trading jokes about Trump and knocked it out of the park. The strongest bits about Trump on SNL have come from Jost and Che, and it doesn’t appear that they’ll be letting the foot off the gas anytime soon.

It’s kind of shocking that it took until the second episode the season before we got a Stranger Things sketch. Kenan Thompson and Leslie Jones are great as Lucas’s parents who were not seen in season one, and Melissa Villasenor’s Joyce Byers (Winona Ryder) is spot-on.

Some songs are just not meant to be sung at a campfire. #SNLinManuel pic.twitter.com/m6CSSqndlM

** Vanessa Bayer was mysteriously missing from the season premiere last week, but returned to SNL this week. She appeared in the first sketch of the evening with Kyle Mooney as a brother and sister camping duo who sing Kenny Loggins songs badly to fellow campers Cecily Strong and Miranda.

** Obviously with Manuel as host, there would be a lot of music involved. Manuel performed a remix of “My Shot” from Hamilton in his monologue, and five of the nine sketches involved some singing by Manuel or the cast.