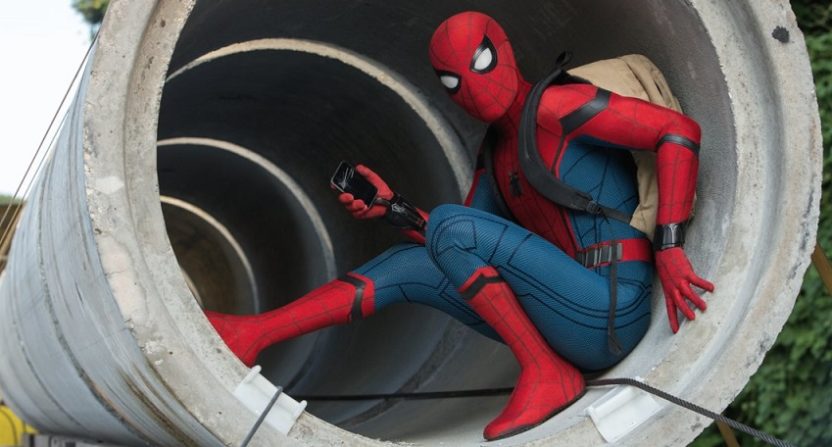 Spider-Man and Marvel Studios were bound to form a perfect union, and Spider-Man: Homecoming comes very close to that. The presumption has been that no one knows Spider-Man and what makes him special better than the company which created the character and has been publishing his adventures for more than 50 years.

Perhaps no recent development in superhero movies generated more excitement than Sony Pictures acknowledging its difficulty with Spider-Man and deciding to share the property with Marvel. The friendly neighborhood web-slinger is Marvel Comics’ most popular character and it was languishing under Sony, which still retains the movie rights to the character but couldn’t generate blockbuster hits from its previous two Spider-Man movies.

Though Andrew Garfield made a good Peter Parker and Spider-Man — especially in his romance with Gwen Stacy (Emma Stone) — the two films directed by Marc Webb tried too hard to tack on an “untold story” to a character who already had a well-established origin and plenty of comic book mythology to draw from. Additionally, Sony clumsily tried to use the Spider-Man franchise to create a cinematic universe, which never developed. Maybe those movies are judged a bit too harshly in the face of Marvel’s reboot, but the criticisms are valid.

Marvel has already created the cinematic universe that all other studios envy and are trying to emulate. So rather than try to build something around Spider-Man, Peter Parker (now played by Tom Holland) can be dropped into the world where Tony Stark, Captain America and the Avengers already exist.

That helps fill some storytelling gaps that have always existed in Spider-Man’s origin. For one thing, how would a kid be able to create such an elaborate superhero costume and construct it from materials tough enough to withstand web-swinging, wall-crawling, crime-fighting and all of the other endeavors that fill Spider-Man’s day? Picking up the storyline that began in Captain America: Civil War, Tony Stark outfits Peter Parker with his suit and gadgetry. (There is a “homemade” version of the Spider-Man costume seen later in the film, which makes the character just a bit more endearing.)

But a key aspect of Peter Parker has always been that he’s a science whiz. Being a science geek also lends to the idea that Peter would idolize Tony Stark and jump at the chance for any guidance from him. Those worried that Stark being his superhero benefactor might take away from that part of the character don’t need to worry. Parker is still smart enough to create his own web fluid (though it’s not explained whether or not Stark came up with a version of his own, based on Peter’s formula) and his original web-shooters.

Though he believes otherwise — especially because Stark’s help gives him legitimacy as a superhero — Peter doesn’t necessarily need Stark’s technology, but it sure makes his job much easier. However, it doesn’t make Peter better at being Spider-Man, which is a frequent point throughout this story. It’s actually a little bit troubling how bad Peter is at being Spider-Man, constantly making mistakes that cause as many problems as he can fix and frequently put people in jeopardy.

Of course, the idea is that a 15-year-old Peter Parker is a fledgling superhero, but he must be good at this on some level, right? Stark recruited him in Civil War to take on the likes of Captain America, Ant-Man, the Winter Soldier and the Falcon. So it seems like Spider-Man would be at least baseline competent as a superhero. But it could also be speculated that Parker is so eager to impress Stark — and his assistant Happy Hogan (Jon Favreau), who’s been tasked with supervising him — and be considered for the Avengers that he acts too impulsively and takes on more than he can handle.

Another possibility is that Stark really didn’t think this through, which is a frequent character trait through the Iron Man and Avengers movies, and gave Parker a superhero upgrade without considering what it might lead to. Unlike those other movies, however, no one is around to call Stark out on his lack of foresight. Peter certainly isn’t going to do it as a 15-year-old kid who idolizes Stark. Though the story doesn’t explore this territory, it’s likely that Stark enjoys being looked up to and getting the chance to be a mentor. However, circumstances eventually lead Stark to realize his mistake when Spider-Man’s poor judgment puts a lot of people in danger.

That still makes Spider-Man: Homecoming something of an origin story. Producer Kevin Feige relieved a load of screenwriters (led by Jonathan Goldstein and John Francis Daley) and director Jon Watts from the burden of having to tell Spider-Man’s origin story yet again. Peter Parker being bitten by a radioactive spider and developing superhuman, spider-like abilities has already been depicted twice on-screen and in numerous animated series. Most people know those details by now and those who don’t can maybe get an explanation from friends, family or the internet afterwards.

Perhaps more importantly, this also relieves the audience of having to see Parker’s Uncle Ben murdered again. It’s certainly a key part of Spider-Man’s origin and what compels him to use his abilities to help people, but this version of Peter Parker has enough to deal with. Watching him cope with the murder of his uncle would probably be too much. It would also interfere with the lighter tone of this movie (though it does get more serious and darker as the stakes between hero and villain are raised). Both the spider-bite and what happened to Uncle Ben are addressed in the script, if not implicitly. Yet the story doesn’t miss either of those components either. That leaves room for a bunch of Marvel Cinematic Universe stuff to shoehorn into the story.

Marvel probably overdoes it a bit with Stark’s role in the story and the frequent Avengers references throughout the movie. But the idea is to show where Spider-Man fits in this universe. A kid still learning to be a superhero presents quite a contrast to older, established figures like Iron Man and Captain America. Interacting with other heroes is a key part of the Marvel Comics universe, so why wouldn’t the same apply to the cinematic version? Spider-Man met the Fantastic Four in the very first issue of his comic book title. So it’s not a stretch for Captain America to appear in public service announcement videos that inform students of how important physical fitness is or lessons that can be learned by serving detention. It’s actually a nice touch that alludes to how the world would react to superheroes being a presence.

The villain of the story also shows the other side of the effect superheroes have had on the communities where their battles take place. One of the questions that may have occurred to viewers after the Avengers’ clash with the Chitauri is who cleans that mess up? Adrian Toomes (Michael Keaton) is a contractor whose company deals with removing all of the alien technology and wreckage from the scene. But he’s out of business when Tony Stark decides that it would be better for the Avengers (and surely the government) if that clean-up was handled in-house.

With some of the technology and weaponry left over (and a tinkerer who knows what to do with it), Toomes sort of represents the 99 percent fighting against the rich guy. Except he does so by vulturing scraps from destruction and selling weapons on the black market. If you’re a Michael Keaton fan who goes way back with him, you might be reminded of his character from 1985’s Gung Ho, fighting for his local auto workers union and the town that needs those jobs as the manufacturer is being taken over by a Japanese automaker. Keaton’s Vulture is one of Marvel’s most compelling movie villains with a motivation much more relatable than being evil and wanting to eradicate humanity. He wants to provide for his family and take back what was taken away from him.

But Spider-Man: Homecoming ultimately works because it doesn’t veer too far from what made the character successful to begin with. Spider-Man works best as a high school kid trying to juggle the regular concerns of adolescence with a being a superhero. OK, he foiled a bank robbery, but did he do his homework? He’s idolized as a superhero, but can’t get his crush to notice him. Sure, this new version puts a new spin on familiar mythology. That’s best demonstrated with Marisa Tomei’s much younger and very attractive Aunt May. (One of the script’s best recurring gags is that everyone acknowledges May’s attractiveness. Why ignore the proverbial elephant in the room?)

At its core, this is a high school comedy set in the world of Marvel superheroes. The movie also deserves applause for an appropriately diverse cast, led by Jacob Batalon, who could be a breakout as Peter’s best friend, Ned. It’s pulled off wonderfully, resulting in the best Spider-Man movie since Sam Raimi’s original two starring Tobey Maguire. Whether or not you think this newest version is better will be up to your personal preference — and maybe recency bias. (I wouldn’t put up much of an argument to those who say Tom Holland is the best Spider-Man yet.) The fact that it’s in the conversation with those movies, however, says that Marvel accomplished its objective and restored Spider-Man to cinematic glory. Excelsior!