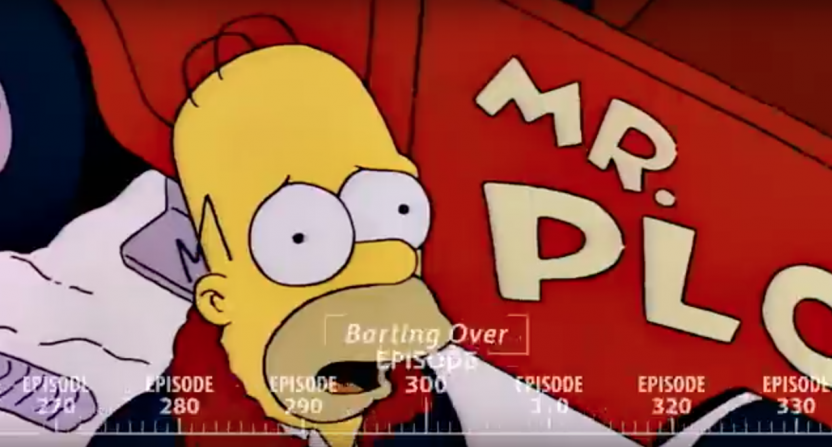 Despite your current feelings about The Simpsons and its quality, it’s incredible to think that the show has been going in some form for the past 30 years. The show just showed its 616th episode and channeled another popular primetime comedy to look back at their history.

The Big Bang Theory has its intro start at the start of the actual “Big Bang” that started the universe billions of years ago. And from there, it goes through the history of the universe and planet earth.

The Simpsons did a similar thing with a parody of the original Barenaked Ladies theme. Instead, they used shots of previous Simpsons episodes to fill in the history.

If you pause the clip, you can see some classic moments. There’s Bart ripping Homer’s Santa beard in their first episode, Bart selling his soul to Milhouse, Mr. Plow, The Be-Sharps, Homer’s patented space-age out of this world moon waffles, Ned in the mental hospital, Richard Nixon on Bart’s butt, Tomacco and everything in between.

I have been pretty critical for The Simpsons and their latest couch gags for being incredibly off the way and way too long but this was actually pretty cool. At the start of the series, a longer couch gag was normally used if writers needed to fill time on an episode. So I’ve usually correlated the more elaborate couch gags over the past decade meant that writers couldn’t fill a 20 or so minute episode.

On the other hand, their couch gags can be something that goes viral and create a buzz for the show on social media. It’s tougher for a viral moment in the middle of an episode so a great couch gag like this can solve that. So it actually isn’t that bad if writers come up with an elaborate and long couch gag.