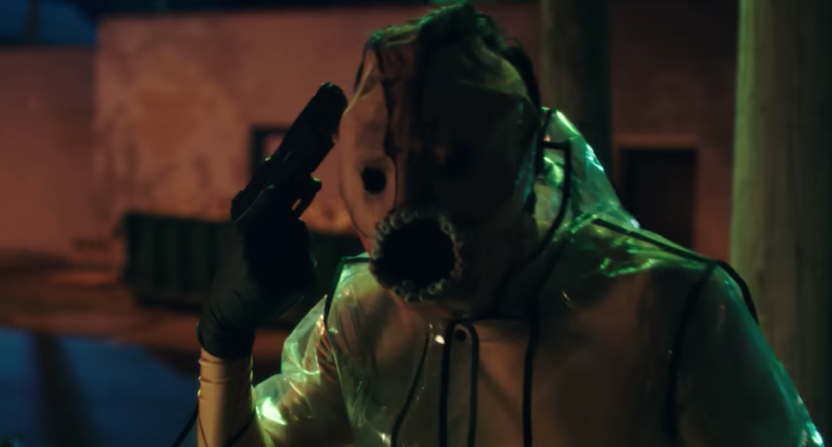 Trailers are one of our favorite things here at The Comeback. Sometimes, these previews better than the movies or TV shows they’re promoting. But a good trailer is also a form of entertainment all by itself.

This week brings us the origin story of The Purge, a Tiffany Haddish-Kevin Hart one-two punch, Michael B. Jordan doubting his book-burning, a zombie daddy, unlocking some violent achievement with the help of futuristic technology and a poop monster.

Here are the best movie and TV trailers from the past seven (OK, six this week) days:

Has the concept of the Purge movies worn itself out? Probably not, especially when there’s an appetite to be filled for horror and extreme violence during the summer. The idea that people need a release from all the anger and hatred pent up inside them may resonate more than ever these days. Yet after three films, hasn’t one night of total anarchy been taken as far as it can go? (P.S., “Purge Night” was ended in the last film.)

Of course not! Not when there are prequels to be mined. From a creative standpoint, telling the story of the very first Purge — a one-day, 12-hour period during which the government allows any crime to be committed — has some merit.

The hope is that writer James DeMonaco (who also directed the first three movies) has a new way of telling the same story by going back to the very beginning. The premise of the government sending paramilitary groups into black neighborhoods disguised as regular citizens to wipe out everybody could certainly draw some attention.

With no disrespect to Marisa Tomei (who plays the creator of the Purge), The First Purge also seems to lack some star power. At least the first three films had either Ethan Hawke or Frank Grillo as the leads. But between the core concept and a grab for a new audience, maybe no stars (barring any breakouts from this film) are necessary.

Tiffany Haddish is having her moment, fueled by her breakout success in Girls’ Trip (which is finding a new set of fans as it makes the rounds on HBO), a stand-up special on Showtime, hosting Saturday Night Live and standing out as a presenter at the Oscars. Pair her with Kevin Hart — who is wearing thin with some people, but is still dependably funny — and Night School looks like a sure thing.

Based on the trailer, Haddish is playing kind of the straight role while Hart cuts it up. Although there’s also an implication that she has some issues to deal with and surely gets to unleash her crazy side later on. Why else would she be in this movie, right?

Approximately one month after HBO released a teaser trailer for Fahrenheit 451, a full trailer is now available (just in time to play with Paterno on Saturday night). Along with that comes an official premiere date of May 19.

As you’d expect, this full trailer goes a bit deeper than the teaser, which really only introduced the premise of a world in which books are outlawed and firemen are tasked with burning them. This time around, we get a better glimpse of the future world the movie takes place in and learn more about Michael B. Jordan’s Guy Montag. He has questions and soon realizes there’s a lot of truth to discover. That is, if Captain Beatty (a perfectly cast Michael Shannon) lets him.

I hope director Ramin Bahrani didn’t go as far with the futuristic stuff as the Blade Runner cityscapes and touch-screen computer interfaces as the trailer indicates. Fahrenheit 451 is even more unsettling if its future closely resembles our present.

The reflexive reaction to Netflix’s Cargo might be that we don’t need another post-apocalyptic zombie movie or TV show. But this has an intriguing angle with Martin Freeman playing a father who’s trying to get his baby to safety before he turns into a zombie after being infected (apparently by his wife).

Is it at all possible that he’s somehow able to prevent the transformation for the sake of his child? Probably not, but the trailer seems to hint that it’s a possibility. (Who’s not rooting for Martin Freeman?) We’re probably headed toward a bittersweet ending, however. Cargo is an adaptation of a short film, with writer Yolanda Ramke teaming with director Ben Rowland to expand upon their original work.

In the mood for some sci-fi combined with horror, directed by the writer of the Saw and Insidious films? There’s a lot thrown into the blender for Upgrade. It’s a revenge drama with some Iron Man flavor (in terms of the human bantering with an artificial intelligence), with some Jason Bourne (a guy realizing he can fight and dish out lethal punishment) folded in.

Maybe the ingredient that makes this fresh is the comedic element of a guy (played by Logan Marshall-Green, not Tom Hardy) handing over control of his body and watching himself inflict some serious violence on people. That violence is where the Blumhouse brand holds currency. Upgrade is clearly not going to hold back on showing every bloody shot, stab and break possible.

How far is the body modification thing going to be taken, though? Does a guy really need a gun built inside his arm? Why not just carry a gun?

How to Talk to Girls at Parties – May 18

Staying on the weird sci-fi path for one more trailer, How to Talk to Girls at Parties looks like a fantasy version of 24 Hour Party People, taking place in the British punk scene of the late 1970s.Punks probably seemed like aliens to so-called regular people. So what could unsettle some punks more than.. actual aliens? And is that Nicole Kidman in a punk hairdo (and maybe a David-Bowie-in-Labyrinth vibe)? Yes, it is.

Three guys looking to hook up walk into the wrong party, and… just where are these young ladies from exactly? Based on a short story by Neil Gaiman (The Sandman, American Gods) and directed by John Cameron Mitchell (Hedwig and the Angry Inch), this looks like an outlandishly bonkers movie. It’s freaky, it’s glam, it… looks like a movie that absolutely needs to be seen to be properly explained. Maybe that won’t even help.

On one level, The Cleanse seems like a funny answer to a reasonable question. If you were to do a cleanse — or master cleanse — just what would you expect to happen? What do you expect to come out of you?

But that can also be taken less literally. What do you expect to happen to you after a cleanse? If you were to retreat from your daily life and society at large to cleanse your mind, what would you think and feel? Maybe The Cleanse gets into that, and that’s the over-arching theme of the whole thing.

According to Johnny Galecki, the creature that comes out of you is a representation of your toxins and personal demons. Or maybe the movie is just one long poop joke. Not that there’s anything wrong with that.

A sequel to 2014’s Unbroken doesn’t seem like the most likely movie ever to be made. But there was more to Louis Zamperini’s story (and Laura Hillenbrand’s original book) than was shown in Angelina Jolie’s film, especially regarding the role that religion played in his life upon returning home from World War II, during which he was captured and tortured.

However, that’s also a story that might not appeal to a wide audience, and this movie (directed by Harold Cronk, who made the two God’s Not Dead films) is clearly geared toward a Christian audience which has supported such films well in recent years.

Read what you will into Jolie not being involved, nor Jack O’Connell again playing Zamperini. But for those who were inspired by his story and want to see a more complete depiction of it, seeing the PTSD he suffered through, his attempt to train for the 1948 Olympics, and the influence Billy Graham played in his life will surely be satisfying.