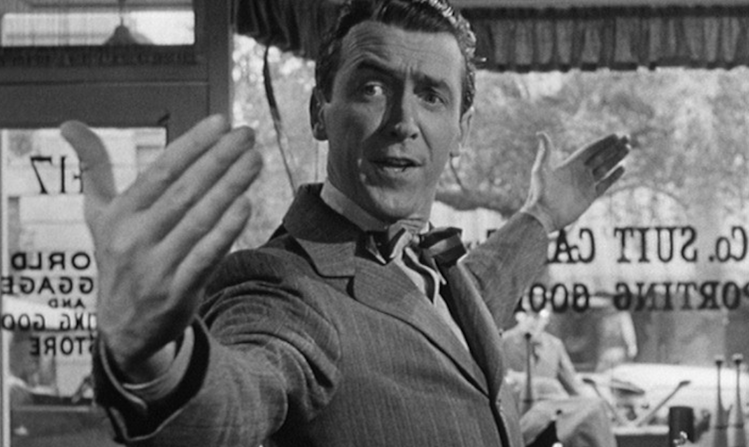 As you’re gathered around the TV this Christmas, there’s a high likelihood that you’re watching It’s a Wonderful Life, that ubiquitous holiday film.

I have long had a theory that the classic is not a Christmas movie* and that George Bailey has more in common with Don Draper of Mad Men than most other characters. In order to explore this theory, I rewatched the Frank Capra classic from 1946 and really wasn’t quite prepared for how right — and wrong — I was.

That said, this argument is not particularly interesting and if your holiday tradition is watching Hans Gruber get thrown off of Nakatomi Tower, good for you, and I’m not pursuing that as an argument. I will cringe inside a bit and have an internal argument about it not being a Christmas movie when you add it to your list. But it’s really not worth the energy.

So what is It’s a Wonderful Life, if not a Christmas movie? It’s an existential crisis movie. And it’s an anti-capitalist movie. Both of which made it feel a little too on the nose to be watching in the year of our self-destruction 2017.

George Bailey is a simple man with big dreams, most of which involve getting out of Bedford Falls… which he never actually accomplishes. Through a series of unfortunate events, he ends up putting his happiness on hold so that others can go explore the world. He finds love, sure, and makes a decent living running the only honest bank in town, going toe-to-toe frequently with the big bad Mr. Potter. But at base, George wants more than this provincial life… and is never going to get it.

A financial crisis sets in motion the contemporaneous action of the film, leaving George to consider suicide to escape his troubles. And, truly, to escape the trappings of a life he never really wanted. Everyone else has left Bedford Falls and found success and fortune and George is just good old reliable George. Sure, his wife is hot, but that’s about it. The damn finial won’t even stay on the stair railing.

George suffers from crushing midlife existential dread. And reminds me in particular of one character: Don Draper. 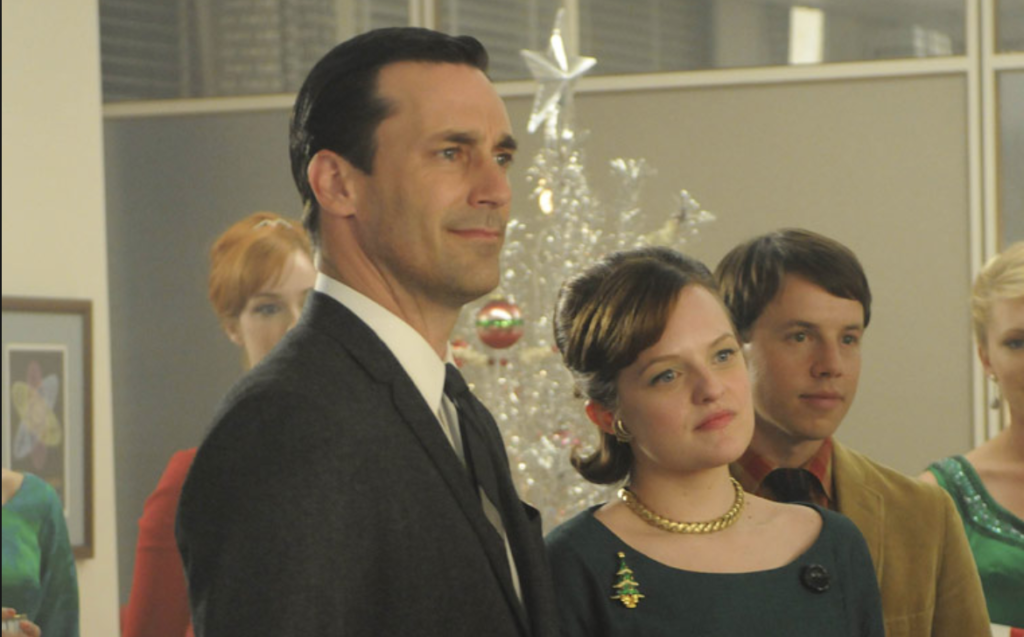 Don was good at his work, and liked being good at his work, but I don’t think we’d describe him as particularly passionate about it. He too had a hot wife… who he cheated on relentlessly. He was always yearning for more and never quite getting it. Or getting more and still being unhappy. George is Don. Don is George. Two deeply unhappy men who don’t quite have a way out, or around, or through to something… better, I guess.

That existential dread, that life lived but not lived happily, connects these two. The only real difference between the two may be their responses to this existential dread. George has a magical guide who shows him a world without him in it. And so George decides to live. But it’s an odd choice. It’s not like George’s existential dread went away or he gets what he wants. George isn’t going to become a WWII ace or go to far flung places. Hell, Mr. Potter doesn’t even get the comeuppance he so justly deserves at the end of the film.

George just realizes that a world without him is bleak (though as my husband pointed out, and other authors have, Pottersville with all its bars looks kind of awesome compared to wholesome Bedford Falls) and that he does have some inherent value and so decides to soldier on. His family and friends help him out of financial straits, refusing to let old man Potter win (this round, anyway), with an old-timey GoFundMe, returning the goodwill George has previously shown to them, endlessly, though they were all ungrateful until George is about to break.

Don, on the other hand, creates a famous Coke ad after spending some time at an overpriced Big Sur meditation retreat? At least it feels more honest. It feels more like Don understands at base who he is more than George does. And at least he created Peggy and Sally, both of whose stories I would gladly watch to completion.

But there’s nothing particularly wonderful about George’s life.

More than just the general existential sadness of George’s life, I was struck on this rewatch by the fact that Mr. Potter is truly evil. He has no consideration for the good of the town or the people at all. It was a little too… everything in our current political climate where we call our representatives on a weekly basis to try not to have them claw back basic necessities. And apparently even back then, the bankers were so mad they were being picked on and being shown as ruthless that they wrote to the FBI about it, saying the film was communist propaganda.

If only we’d listened then…

And therein lies the need for George Bailey: we shouldn’t underestimate the need for the George Baileys of the world. His sacrifice may create existential crisis for him as an individual, but it makes the community better and stronger and one worth being a member of. Not a crime-filled Pottersville hellscape. Which is why we can still enjoy and appreciate It’s a Wonderful Life, even if at base it’s a horror film and not a happy Christmas story. Also, it’s amazingly well-crafted. Capra did Hollywood schmaltz better than just about anyone.

Oddly enough, It’s a Wonderful Life wasn’t as successful in its original run as many in Hollywood might have hoped from a Frank Capra piece. In fact, it spelled the end of Capra’s career. He’d go on to make a couple more movies with Bing Crosby and then… nothing. He basically abandoned Hollywood because it was too much like Pottersville and not enough like Bedford Falls. And maybe too much of a place where the Don Drapers thrive instead of the George Baileys.

So maybe the next time The Good Place wants to make a joke about holiday films, the way they did with Home Alone, they can show a horror film about a man who lives a horribly depressing life, only to have his life erased and find out the world is more depressing without him so he presses on and they can cut to a screenshot of It’s a Wonderful Life. And you can still enjoy it with your family, knowing in the back of your mind how truly dark it is.