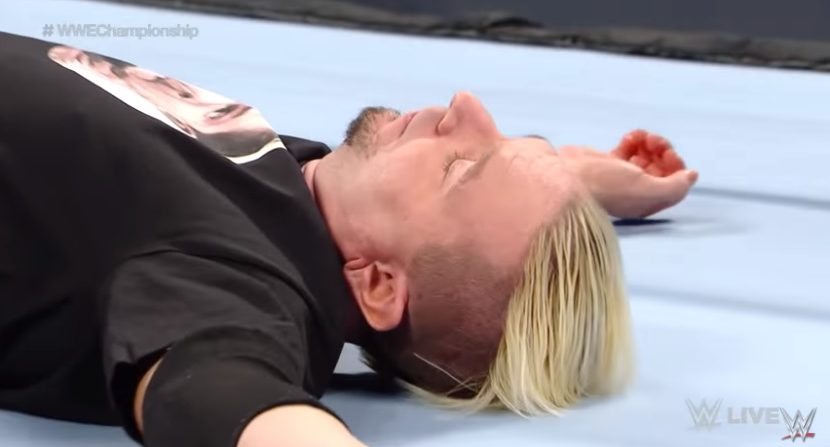 On July 25, 2016, the WWE was in the midst of building up their latest big man Braun Strowman by pitting him against jobbers, a non-roster talent whose sole purpose was to get squashed by the 6-foot-8, 385-pounder. On this particular episode of Monday Night Raw, as Strowman strode to the ring with menace in his eyes and hate in his heart, WWE announcer Byron Saxton interviewed his upcoming opponent, a scrawny, chinless jamook named James Ellsworth. Saxton’s question to Ellsworth was quite literally, “What in God’s name are you thinking stepping into the ring with a monster like Braun Strowman?” Without missing a beat, Ellsworth responded with one of the most endearing and earnest responses the wrestling program has ever produced.

“Having a match on Raw is a dream come true for me. I didn’t know it was gonna be against Braun Strowman. So yes I’m nervous, yes I’m scared, but if I can somehow, someway, pull off the upset…cause I truly believe any man with two hands has a fighting chance. I can only imagine what that may do for my career.”

The beauty of watching pro wrestling is that, as many have pointed out, there is what you’re watching and then there is what you know is happening behind the scenes. You didn’t have to know who James Ellsworth was to know he was probably a local independent wrestler without many prospects of ever making it to this level on talent alone about to get his one and only shot to wrestle a match in an actual WWE ring in front of millions of people. He was playing a character but everything he said was true.

Ellsworth did his duty, getting summarily destroyed by Strowman in a match that lasted roughly one minute. He played his part perfectly, allowing Braun to look every bit the monster WWE wanted him to be. From there, everyone assumed, Ellsworth (real name Jimmy Morris) would cash his check and return to the local gym from whence he came.

Except, Ellsworth came back. The diminutive wrestler returned as a surprise tag team partner for Dean Ambrose during his high-profile feud with A.J. Styles for the WWE Championship. Over the course of the next few months, Ellsworth became an essential part of the storyline, even defeating Styles (with just a little help from Ambrose) in two singles matches, which then led to a title shot against Styles (which he also won though via disqualification and therefore did not win the title). Just as the hopeful Ellsworth hype was about to crest, the WWE had the smarts to turn him heel and reinvent his burgeoning character on the fly. Ellsworth went on to cost Ambrose the WWE Title in a misguided attempt to keep Styles as champion so that he could be the one to defeat him as he had before. This time, however, without Ambrose’s help, Ellsworth was once again squashed and one of the tidiest, well-executed character storylines in recent memory was wrapped up.

As 2017 began and Ellsworth’s initial charm faded and fans began to find him annoying, WWE once more leaned into it and turned him into a full-on goofball, aligning with rising women’s wrestler Carmella as her valet/pet/gofer. From there, the enhancement talent once again did his job, helping to create some much-needed heat and storylines around Carmella as she worked her way from NXT call-up to legitimate WWE wrestler. The storyline culminated in a Money in the Bank match when Ellsworth pushed Becky Lynch off the ladder and claimed the Money in the Bank briefcase on Carmella’s behalf. It was a controversial decision at the time, and still is, to have a man “win” the first-ever women’s Money in the Bank match. While Ellsworth was merely playing his part, the WWE also seemed to know that the unlikability that had built up around his character made him the perfect heat magnet for the move.

Afterward, you could feel the writing on the wall. While Ellsworth and Carmella continued to mine their relationship for strange and weird bits, the whole thing was starting to hold the rising star back. And so, after teasing that Carmella was tired of his shenanigans, she kicked him to the curb following his loss to Becky Lynch in what was WWE’s first intergender wrestling match in some time. It was a cathartic moment for the female wrestlers who beat Ellsworth down post-match after putting up with him for so long, not to mention cathartic for WWE fans who had their fill of the character by now.

In the wrestling world, they say you should always leave on your back and that was certainly the case for Ellsworth, who received his release from the WWE on Wednesday. His final moments on WWE television involved getting beaten down by much more talented athletes and much better wrestlers than him. He left as he arrived, giving it all he had in order to make those around him look better. Many fans may have tired of seeing his face (and shoddy acting), but in separating the character from the person, it’s hard not to want to thank James for his efforts and applaud the work he put into making his dream become a reality, even if only for a year.

Because this is wrestling and time heals all wounds, it’s a foregone conclusion that Ellsworth will show up on a WWE program again one day. Most likely, he’ll be a surprise Royal Rumble combatant. Maybe he’ll pop up as a mega-jobber to put over the next giant in order to remind people of Strowman. Or maybe we’ll just see him creeping backstage, trying to weasel his way back in for comic relief. Whenever that time comes, expect to hear a big pop for the tiny guy with two hands and no chin.