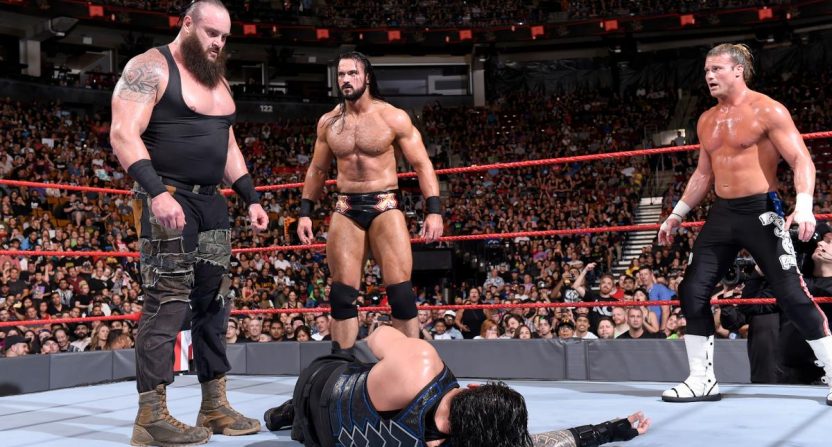 The last two weeks of WWE’s Monday Night Raw have ended with shocking twists. Last week, after Roman Reigns had a grueling Universal Title defense against Finn Balor, Braun Strowman tried to cash in his Money in the Bank contract for an immediate title shot. Just when it was about to happen, Reigns was saved by his Shield buddies Seth Rollins and Dean Ambrose. The Shield trio worked together to pick up the massive Strowman and drive him through the ringside table with a triple powerbomb that is sometimes known as the Shield Bomb.

Following that Shield reunion, there were some fans that immediately thought that maybe it was time for a heel turn for Reigns and his buddies. Nope. There was no turn. In fact, five minutes after Raw ended last week, WWE was already selling new Shield merchandise. Imagine that! It’s like this thing is scripted or something. Bad joke, I know. Anyway, the real story is that Reigns was reunited with his buddies again after Ambrose missed eight months following arm surgery.

This week on Raw, Reigns called out Strowman at the start of the show. Strowman said he didn’t want to cash in the Money in the Bank contract on Raw in Toronto because he knew if he did, Rollins and Ambrose would just attack him to save him. Strowman told Reigns he’ll cash in at Hell in a Cell on September 16 in San Antonio with Strowman adding that it will be a match they have never had before: a Hell in a Cell match.

Their promo was interrupted by Dolph Ziggler and Drew McIntyre with acting GM Baron Corbin showing up to make the predictable tag team match later in the night.

There was even a segment on Raw where Strowman was shown backstage with Corbin, officially cashing in the contract to set up the Hell in a Cell match.

In the main event, which started later than usual at a few minutes past 11pmET, Reigns worked the entire match for his team. When Reigns finally managed to tag in Strowman after about eight minutes, Strowman just stood there looking at him. McIntyre and Ziggler stomped away on Reigns, which meant that they were disqualified and it ended the match.

Dean Ambrose tried to save Reigns, but he got his ass kicked. The same thing happened to Seth Rollins, who ran out there while favoring his left arm after selling an injury from a great match earlier in the night. Why didn’t Ambrose and Rollins run out together? Because it’s wrestling, my friends. It doesn’t always make sense. They did it this way to tell the story they wanted.

Strowman hit his Running Powerslam finishing move on Rollins, then on Ambrose, and finally on Reigns. Strowman posed with McIntyre and Ziggler by his side and they put their hands in the air together.

After the show, WWE immediately announced a huge six-man tag team match for their Australian WWE Network event on October 6 with The Shield trio of Reigns, Rollins, and Ambrose taking on Strowman, McIntyre, and Ziggler. That match is three weeks after the Hell in a Cell match between Reigns and Strowman.

The big question coming from Raw is this: Does that mean Braun Strowman is a heel now? Just like a coin, there are two sides to this situation.

It’s a peculiar move if Strowman is a heel because he is arguably the most popular guy on Raw. I think it’s him or Seth Rollins, who gets massive ovations every time he is out there. I wouldn’t put Reigns up there because of all the people that boo him, but Reigns is almost always booked like a top face.

I can understand why WWE would want to turn Strowman, because he’s bigger guy and it’s easier to book bigger guys as heels. The problem with that is the fans have totally gotten behind him. When you watch Raw and hear fans chant “get these hands” for Strowman, it tells you how much they like the guy. The fans wanted Strowman to cash in the Money in the Bank briefcase to become the next Universal Champion. Instead, he chose to do the honorable thing and challenged Reigns to a Hell in a Cell match. If that’s the case, then why did he do the cheap attack to end Raw? It’s because that’s what heels do. They lie.

The other side of the coin is that Strowman was the one that got attacked 3 on 1 by the Shield last week. Look at what Strowman tweeted after the show.

A lot of times when people talk about pro wrestling stories, they mention the “grey area” of an angle where you can’t tell if a person is a face or a heel. I think Strowman is going to be one of those guys that’s in the grey area. I have a hard time believing that fans are going to turn on Strowman all of a sudden just because he attacked Roman Reigns, who is not well liked by most of the fans.

The actions of Strowman were likely done for Reigns’ benefit. After all, Vince McMahon has spent about four years trying to establish Reigns as the next Cena. In some ways, he is already there since it was reported in the Wrestling Observer Newsletter last week that Reigns has finally passed Cena as the top merchandise seller in WWE. That’s a very valuable piece of info because it tells WWE management that despite the boos in the arena, a lot of fans like Reigns, especially kids. Reigns also has, by far, the most merchandise items available, but that also comes with being “The Big Dog” so to speak.

I think next week’s Raw will be key. If Strowman acts the same way he has done for the past few months, then fans are going to cheer the guy. However, if Strowman cuts a promo with McIntyre and Ziggler by his side, fans will want to boo him because McIntyre and Ziggler have established roles as cocky heels. Perhaps Strowman can say something about how he found two guys he can trust to watch his back, he can say they are a unified team that can take down The Shield and it should lead to many six man tag team matches.

I’m going to hold off on rushing to judgment on this storyline because there are a lot of ways it can go. Sometimes, wrestling fans are bad in terms of not waiting to see how things will play out. I admit that I am bad at it sometimes too because we all want answers right away, but most of the time it’s better to wait it out.

My initial feelings are that Strowman is now the heel against Reigns as the face champion, but when we get to Hell in a Cell on September 16, who will be cheered more? I think Strowman will be, and that’s the problem with the story. With that said, I don’t think it matters. The story is one guy is the champion, the other guy has never been a major champion, and he wants to beat him. It doesn’t have to be that classic “one guy is a heel, one is a face” story.

I would be very surprised if Reigns beats Strowman clean, even though he did in the Elimination Chamber match back in February. I would be shocked if Reigns were to lose the Universal Title one month after winning it. The most likely scenario is some cheap finish with McIntyre and Ziggler getting involved along with Rollins and Ambrose leading to Reigns capitalizing on that situation to win the match. The Hell in a Cell structure is designed to keep people from interfering, but WWE has come up with many interesting ways of getting around that by having interference in HIAC matches in the past.

I think the one positive thing we can take from this is that WWE has ended Raw in a big way the last two weeks. The Shield’s return was great last week and Strowman’s turn, if it is even a turn, was a big surprise. I don’t know if it’s the right call (while also understanding that some fans are going to be mad about), but I’m also willing to see how it plays out.

To wrap it up, I’m excited about seeing Reigns vs. Strowman on the big stage again. They had one of the best feuds in WWE last year and wrestled in all kinds of stipulation matches. It’s definitely a match that is worthy of main eventing Hell in a Cell on September 16. I have a strong feeling it won’t be the end of this rivalry either. Not by a long shot.