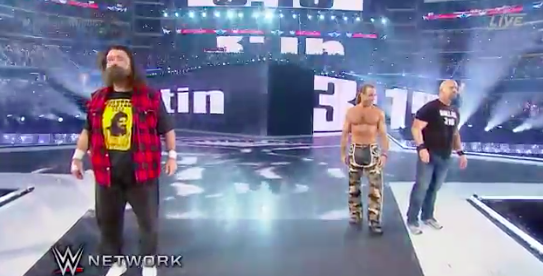 We live in an event-driven culture, so it’s no surprise that WrestleMania has taken on a larger-than-life status in the last several years. Much like another event that took place this past weekend, the Final Four, WrestleMania has become exclusively a stadium show to try to get as many people there in person as possible.

And as WrestleMania has grown as a major event in the sports and pop culture worlds, it’s become increasingly about “WrestleMania moments” — the moments that will be played and replayed in highlight packages and videos for years to come. It’s these moments that won’t just be shared within WWE either, they’ll be shared on Twitter and blogs and SportsCenter and the Today show. It’s not so much even about wins or losses anymore at WrestleMania (insert joke about wins and losses not mattering in something that is an endeavor in entertainment), it’s about who can get that “WrestleMania moment.”

WWE’s NXT brand is wildly popular and a lot of hardcore wrestling fans will tell you that it’s actually a better product than the main Raw and Smackdown shows. While NXT had their own show over WrestleMania weekend (which was amazing and featured the debut of Japanese star Shinsuke Nakamura) they also had their moments on the big show. The biggest of which was NXT star Baron Corbin getting the upset win in the Andre the Giant Memorial Battle Royal.

9) Shaquille O’Neal is here… wait, what?

Shaquille O’Neal has history with WWE, but it was a major shock when he showed up for the Andre the Giant Memorial Battle Royal. Shaq squared off with The Big Show and the pair were ultimately eliminated by everybody else in the match. Shaq’s appearance continued the history of athletes being in WrestleMania battle royals going all the way back to William “The Refrigerator” Perry and other NFL stars at WrestleMania II in Chicago.

WWE COO Triple H has had more than his fair share of elaborate entrances over the year (namely when he became The Terminator last year). This year HHH and wife Stephanie McMahon combined for an entrance that was straight out of Game of Thrones and included Stephanie McMahon giving a power-crazed speech that’s what I imagine Donald Trump’s inauguration address might sound like.

For their WWE Tag Team Championship match, crowd favorites The New Day entered through a giant box of cereal. It was a decent consolation prize to their rumored entrance — flying around on unicorns.  You’ve got to save something for WrestleMania 33, I guess…

Zack Ryder had a brief run as a budding WWE superstar a few years ago, but then he just as quickly disappeared into oblivion. Ryder being in a WrestleMania match was surprising enough, but him winning? The Cleveland Browns have a better chance of winning the Super Bowl this year. That’s exactly what happened, though, as Ryder won a multi-man ladder match for the Intercontinental Title to achieve his first “WrestleMania moment.”

5) Roman Reigns wins the title amidst a smattering of boos

This is a moment WWE would probably like to forget. First of all, by the time Roman Reigns lifted the WWE World Heavyweight Championship, WrestleMania was in something like its 37th hour of being on the air — so the crowd may have been understandably drained. On top of that, though, the WrestleMania crowd did what everyone could have predicted — booed the bejeezus out of Reigns throughout the entirety of his main event with Triple H. Reigns got his triumphant moment, as he’s been the Next Big Thing WWE has tried to force upon fans for multiple years now, whether they accept it or not. But hey, on the bright side, at least #CancelWWENetwork wasn’t trending last night.

4) The Rock has a surprise match

.@TheRock is READY for a match at #WrestleMania!!! pic.twitter.com/eDBqal8zhu

Official Hollywood Movie Star The Rock made his annual WrestleMania appearance to hype up the crowd (which included a flamethrower and the Dallas Cowboys cheerleaders, for some reason). This year, though, it featured something different — an actual match!  The Rock wrestled Erick Rowan of The Wyatt Family and defeated him in six seconds, besting the record for the quickest match in WrestleMania history. I think it took The Rock longer to take off his tearaway pants. Does he always wear his wrestling trunks under normal clothes, just in case he gets challenged to an impromptu wrestling match?

Throwing caution to the wind, @mscharlottewwe moonsaults to the floor! #WrestleMania https://t.co/iMqr5auwJc

One of the most exciting developments from WrestleMania 32 was WWE getting rid of the Divas Championship and replacing it with a proper Women’s Championship. Former NXT stars Charlotte, Becky Lynch, and Sasha Banks put on the match of the night in a triple threat match for the new belt and signaled the dawn of a golden era in women’s wrestling in WWE.

Be careful issuing challenges at @WrestleMania! You NEVER KNOW who will answer!! @RealMickFoley @SteveAustinBSR #HBK https://t.co/kkQsEtT4XZ

Rusev taking that Stunner like the future Hall of Famer that he is #WrestleMania pic.twitter.com/1T4eAhKh9E

.@shanemcmahon off the top of the steel cage! #WrestleMania pic.twitter.com/APEFHwTJal

Shane McMahon’s match with The Undertaker — one of the most unique matches in WrestleMania history — was going to come down to one thing and one thing only. Was Shane McMahon going to make a crazy, death-defying leap from the top of the massive Hell in a Cell structure through a table? Of course, Shane did, missing on an elbow drop from over 20 feet in the air. It was nuts. It was legitimately terrifying. It was the WrestleMania moment of 2016.