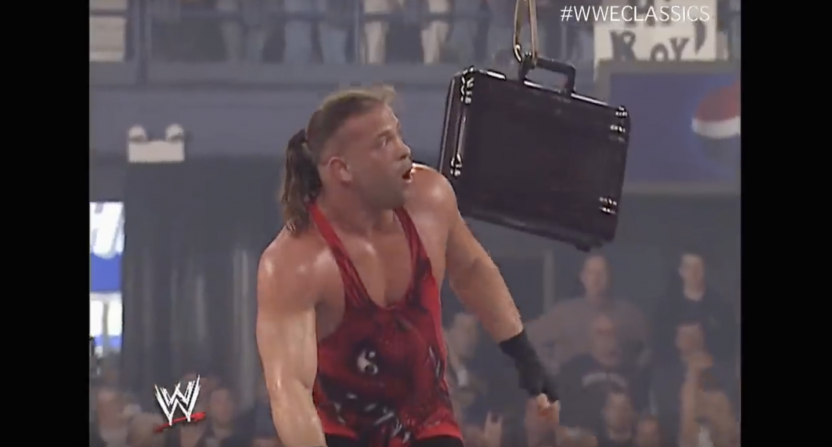 WrestleMania 36 is going to look vastly different this year but even with an empty arena or on-location matches shot cinematically, it’ll still technically be “The Showcase of the Immortals.”

The Undertaker’s 24-2 record is the best and probably won’t be beaten but it’s not undefeated. The next active undefeated superstar is nowhere close to 21-0. In fact, at 2-0, King Corbin leads the pack among active superstars.

It’s very difficult to maintain an undefeated streak these days. Now that WrestleMania is more about including the complete roster, there are a lot of multi-person matches. So if there’s a battle royal, there’s only one winner and many losers.

It’s important to note that matches taking place on the preshow do not count on somebody’s record. Even though the preshow is at WrestleMania, it’s technically not the main show so in that instance it doesn’t count. As a result, only 62 people can claim an undefeated record at WrestleMania and some of these names are very surprising. Way more people are winless so even if you are one and done, being on this list is an achievement. Only one person is 4-0, and he stands alone as the current holder of the best undefeated record at WrestleMania. That person is:

Given WWE’s reputation, whether fair or unfair, of “burying” performers who come over to WWE, Rob Van Dam is apparently an exception at The Grandest Stage. Coming from ECW, RVD made his debut at WrestleMania X8, defeating William Regal in the opener for the Intercontinental Title. After a preshow loss at WrestleMania XIX which didn’t apply to his record, RVD teamed up with Booker T to retain the World Tag Team Championship at WrestleMania XX. RVD came back to win the Money in the Bank ladder match at WrestleMania 22 while his final appearance was in an eight man tag match at WrestleMania 23.

RVD is currently on Impact Wrestling so there’s a pretty good chance he remains at 4-0. If so, he might be a far way away from getting to 21-0 but he may stand alone at the top for the foreseeable future.

Active in WWE: None

These five are next in line on the undefeated road and while none of these people headlined a WrestleMania, it made sense why these people were undefeated. Demolition and the Road Warriors were unstoppable tag teams in their heyday. British Bulldog was involved in tag teams with Lex Luger and Owen Hart when he went on his three-peat run in the mid 90s.

And then there’s Sable. Women’s wrestling was…more about taking clothes off than athletic competition so it wasn’t really respected that much. Sable had won matches in WrestleMania XIV and XV and after a three year absence where she sued WWE, Sable came back to wrestle in an evening gown match at WrestleMania XX. While Sable was more about sex appeal than wrestling ability, she was decent in the ring (at least in this era) and she did get people to watch WWE back in the day even if her way of getting them to watch may not be what WWE is going for these days.

Yes, there is only one active superstar who has wrestled in multiple WrestleMania matches and is undefeated. Baron Corbin or King Corbin has done a bunch of preshow matches but when he was on the main show, he made it count. After winning the Andre the Giant Memorial Battle Royal at WrestleMania 32, he came back to defeat Kurt Angle in Angle’s final match at WrestleMania 35. At 2-0, Corbin will have a chance to continue that streak against Elias this weekend.

The others who are 2-0 are a who’s who in pro wrestling. AJ Lee, who really deserves more credit for the Women’s Evolution, really showed why she was so great at WrestleMania’s 30 and 31. Chyna, Mr. T, Rick Rude, and Terry Funk are all hall of famers who were able to remain undefeated in their WrestleMania careers. And then there’s Virgil. Usually secondary to the “Million Dollar Man” Ted DiBiase, the “meat sauce and breadsticks” guy himself got a countout win at WrestleMania VII and scored the pinfall in an eight man tag match at WrestleMania VIII. When it came to competing at “The Showcase of the Immortals,” Virgil of all people couldn’t lose.

Unless plans change… none of the four active superstars will be risking their perfect WrestleMania records this year. Three of the four, The IIconics and Samoa Joe got their wins last year. Braun Strowman got his win by teaming up with then 10-year-old Nicholas (who’s also 1-0) to win the Raw Tag Team Championship at WrestleMania 34.

Yes, Snooki has a win at WrestleMania and has as many wins as people like Dusty Rhodes, Arn Anderson, and Tully Blanchard. It’s just best not to think of that too much.