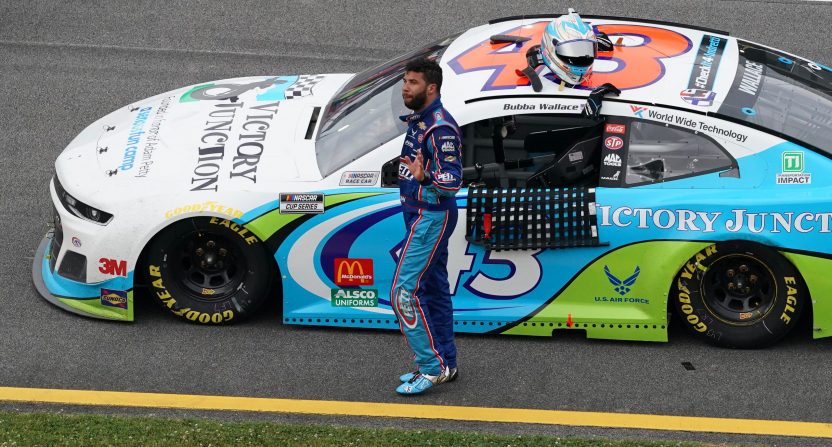 The FBI released a statement on their investigation into a noose found in Bubba Wallace’s garage at Talladega Superspeedway this past Sunday, with that statement saying it was “a misunderstanding” and had been there long before Wallace ever had that garage stall.

The statement read that “video confirmed by NASCAR” showed that the noose was in that garage stall “as early as October 2019.” And since there’s no evidence that the noose was directed toward Wallace, no charges are being filed. Garage stalls are assigned by points, so this wound up being a coincidence.

NEWS: The FBI has just released a statement about the NASCAR noose incident at Talladega, indicating it was a misunderstanding. No crime was committed. The noose was already there as early as last year. pic.twitter.com/j2MGrOvUN3

In trying to figure out exactly how it became a misunderstanding, Wood Brothers Racing revealed that an employee recalled that the pulldown rope on the garage door in that same garage in 2019 was tied in a way that could’ve looked like a noose. NASCAR concurred, saying “the garage door pull rope fashioned like a noose had been positioned there since as early as last fall.”

NASCAR releases a statement on the situation: pic.twitter.com/RC6asyMxMn

In responding to the FBI’s report, NASCAR president Steve Phelps said it was “the best result we could hope for” and that NASCAR would undergo the same process if something like this happens in the future. As far as the pull rope situation is concerned, Phelps said an investigation is still being done because pulldown ropes in the other garages “do not normally appear that way.”

NASCAR president Steve Phelps says they are continuing to investigate why there was a rope fashioned into a noose last year (indicating the garage pulldown ropes do not normally appear that way). They will answer questions when that investigation is concluded.

While this became a massive misunderstanding, there are some positives to take from this. Everyone involved in NASCAR took a hard line when they thought one of their own was being subjected to a hate crime. Some people might not like hearing this, but the the process was done correctly.

The crew member who discovered what they thought was a noose did the right thing and alerted NASCAR, who alerted authorities. And what the drivers and teams did yesterday to support Wallace was absolutely genuine. NASCAR did the right thing getting in front of the story and revealing it themselves and they didn’t waver in putting out the hard stance of a lifetime ban if someone was caught.

In addition, drivers have supported their competitor and friend with genuine statements against racism and against those people who still harbor those views. A month ago, many of these drivers who might privately support Wallace wouldn’t say anything for various reasons. Now, they’re front and center. All of this was the right thing to do, even if this was ultimately a misunderstanding. It would be wrong if someone was actually accused for planting the noose toward Wallace but that didn’t happen.

What NASCAR did was put out a warning to anyone else who even dares try this in the future. Let’s not kid ourselves, Bubba Wallace has been, is, and will be subjected to some form of hate crime from ignorant people. Those ignorant people can keep believing conspiracies, but after seeing NASCAR’s fury in wanting to seek out the culprit and NASCAR’s compassion in supporting their friend, the racists are going to find themselves pretty lonely if they try to do something in the future.

[UPDATE] Fox Sports’ Bob Pockrass tweeted a screenshot of a video he took from last October that shows the rope in the shape of a noose. Given everything that has gone down in the past month, it’s realistic that within the garage of the only Black driver in the NASCAR Cup Series, a crew member thought that could’ve been a noose.

Went back and took a look at my camera roll on my phone and screenshot this from video … rope on the left: pic.twitter.com/Od1Z4aKaxi