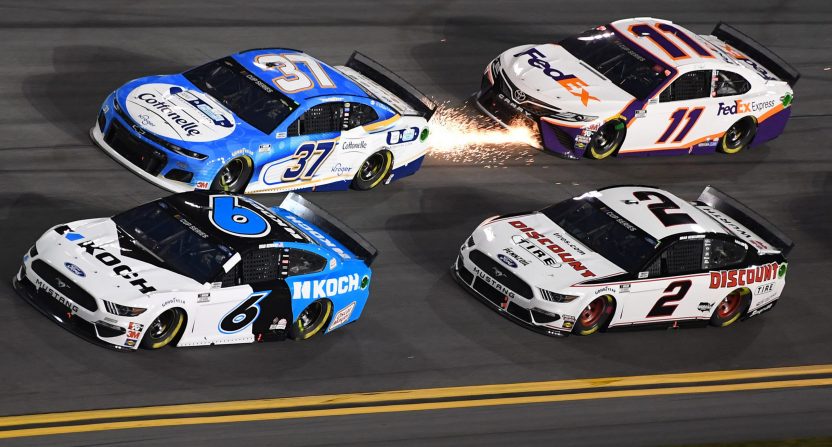 The 62nd running of the Daytona 500 is this Sunday, and races like Daytona and Talladega are great for gamblers. With the way those races are, even the favorites are giving good payouts. Yes, that makes it tougher to pick a winner, but the inherent randomness of the race and the possibility of the “Big One” also means it’s difficult for handicappers to get a feel on who will win.

In essence, this is a crapshoot and if you can get lucky and pick the winner, you’ll be a big winner. To make this a little bit easy, I’ll give you three favorites, three sleepers, and three dark horses that you should consider betting to win the 2020 Daytona 500.

There are eight drivers ranging from 10/1 to 13/1 who would be considered favorites. Among those eight, three drive for Team Penske and three drive for Joe Gibbs Racing. While the oddsmakers aren’t really sure who will win, they have a pretty good idea which team the winner will drive for.

Having the defending Daytona 500 champion and odds-on favorite is a bit of a cop-out, but Hamlin looked good in the Duels. Given only three others have won back-to-back Daytona 500s, Hamlin is going against history. At the same time, Hamlin was one of the few drivers willing to make moves in the Duels. Sometimes that winds up costing a driver a good finish, but you only need to pick the winner and you can’t win if you don’t make moves. Denny Hamlin is either going to win or finish in the back.

Every year, I keep convincing myself this is the year Brad Keselowski finally wins the Daytona 500. The planets have aligned for the #2 driver. Team Penske is as strong as it’s ever been, Ford has been phenomenal on superspeedways, and Keselowski has earned just about every NASCAR achievement under the sun. Except this one. You can also say the same thing about Kyle Busch, but between the two, Keselowski seems like the stronger superspeedway racer.

I might have felt a little better about Ryan Blaney before the Duel, but Blaney is always a force to be reckoned with at Daytona and Talladega. Blaney has to go to a backup car after crashing with Daniel Suárez in Duel #1, but starting position is a bit overrated (unless you’re playing daily fantasy). Blaney knows how to be up front at these races; he just needed to be there at the end. Blaney did just that last year at Talladega, and he has the know-how to do it at Daytona.

The next 10 drivers range from 20/1 to 30/1 and there is some great value on this list. The front row, two former winners, the Busch Clash winner, a Duel winner, and the guy who led the most laps last year are on here. Don’t let the odds here fool you- all of these people can be in Victory Lane on Sunday.

This year’s Daytona 500 pole sitter is notorious for being aggressive, but being aggressive at Daytona and Talladega usually translates to success. Stenhouse has a reputation for causing a bunch of wrecks and that can be blown out of proportion at times, but a win at both Daytona and Talladega back up his ability. At the end of the day, it’s about who crosses the line first after 500 miles. How you do that is up to you. And whether or not Stenhouse wrecks the entire field, he should be there at the finish.

Matt DiBenedetto would probably be the best feel-good story if he were to win. Pick which storyline you want. An up-and-coming driver who’s constantly looking for a break, who always does the right thing, and is loved by fans. A driver who led the most laps in last year’s Daytona 500, and almost shocked everybody with a win at Bristol last year and fell just short. Or you can choose the legendary Wood Brothers team who has been here since the start of NASCAR. And if they were to win, they will have their 100th total win and their sixth Daytona 500. This team is strong, they’re capable, and if they pull off the win, it will be the most popular NASCAR win in a long time.

I find it strange that Erik Jones is still at 30/1 odds. This is a driver who’s on a great team and who won the 400-miler at Daytona a couple years ago. Granted, he won with a punched-in nose but Jones survived the Busch Clash last week and that has to bring some positive momentum throughout Speedweeks. The man has already won once this month. He can surely do it again and you won’t find better odds than this from a Speedweeks winner.

These longshots range from 35/1 to 500/1 and while it looks highly unlikely any of these people would win, there are still a few drivers on this list who may make you a lot of money for not much risk.

Ryan Newman has experience, he’s won the Daytona 500, he’s in a Ford, and he’s notoriously tough to pass. That seems like the makings of a potential winner on Sunday. Roush/Fenway Racing isn’t what it used to be, but they can usually put in some good performances at Daytona. After almost winning the Busch Clash, Newman should have something for the field.

David Ragan was supposed to retire last year, but he was asked to come back for the Daytona 500. He was asked to come back for good reason. Like many drivers I’m picking, Ragan is a great superspeedway racer. With two wins (one at Daytona and one at Talladega), Ragan seems to find himself either up at the front or caught up in a big crash. And he’s definitely looking to ride off into the sunset with the greatest win of them all.

I don’t really have a good reason to believe Corey LaJoie will win the Daytona 500. I do know that him being listed at 300/1 is a major alert for me. LaJoie is among the drivers who will probably stay in the back and not go for the win in order to make sure their car remains intact. That’s not what LaJoie will do. Lajojie will tussle in the pack and make a go of it, so by that logic, he could win. I would’ve had LaJoie among the 100/1 drivers. So if you put $5 on him at 300/1, what would it hurt to put a couple bucks on a potential moneymaker and a story about how you won with the ultimate underdog?