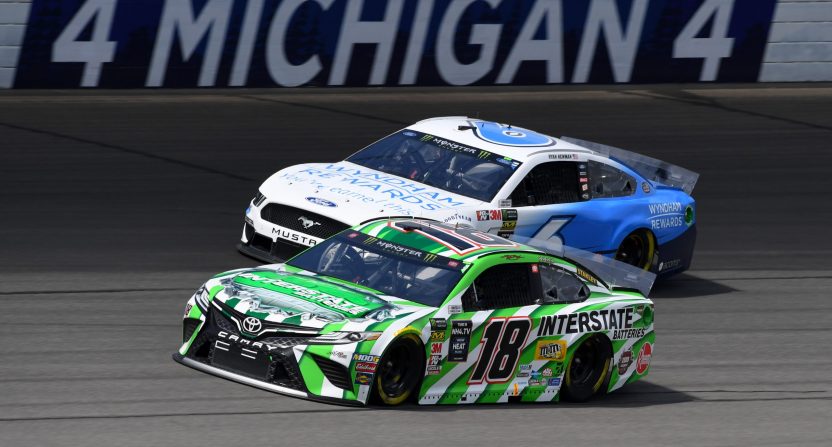 The future of NASCAR is going to bring change to the sport that we haven’t seen in quite a while. The cars are changing, the drivers are changing, and the schedule is changing. How much the schedule changes, we don’t know, but a report by SBJ’s Adam Stern shows that NASCAR is looking at making one-year agreements with many tracks (particularly those with two Cup Series dates) to “gain maximum flexibility” in making the schedule.

Fans want more short tracks and road courses and given NASCAR is considering racing on a street course, nothing is off limits to give fans what they want. Looking at the current 36 race schedule, 13 tracks currently have two Cup Series dates. It’s unknown exactly what tracks are on the chopping block and I’m pretty sure as of now, no decisions have been made and there’s still hope for every track to keep their dates.

Nevertheless, some tracks are in a far better position than others so we’re going to countdown the tracks who are the most likely to lose their second date.

I know Daytona moved their 4th of July weekend date to August to make it the regular season finale but while that might be seen as sacrilegious to many NASCAR fans, Daytona should not be worried about losing a date. The Daytona 500 is one of the few races that sells out and Daytona is the birth of NASCAR. They’re keeping both dates.

Daytona and Charlotte are pretty much interchangeable in their strength in keeping both dates. Charlotte is the home to many drivers and teams as well as NASCAR’s headquarters and Hall of Fame. And if there was any risk to losing a date, Charlotte did away with that by having the Roval and having two different track types at the same location. I would however like to see the All-Star Race go to some different locations. It’s time to move the race to some other places.

In the mid-2000s, Darlington not only lost a second date but lost its traditional Labor Day race date in favor of newer tracks like Texas. The move angered many NASCAR fans at the time and you can argue that to a point, the sport hasn’t recovered. Darlington eventually got their Labor Day date back and the throwback themes on Southern 500 weekend is fun but it was too little, too late. Anyway, if NASCAR takes a date away from Talladega, it’ll have a similar reaction to losing Darlington and I think NASCAR learned their lesson so Talladega is safe.

There’s a chance but don’t bet on it

Phoenix just had a $178 million renovation and completely transformed their racetrack into a state-of-the-art facility. That doesn’t happen if there was a risk of losing a date. The only way losing a date is a possibility is if there was some sort of understanding that in exchange of hosting the championship finale, Phoenix loses their spring date. I doubt that’s the case but stranger things have happened.

Like Phoenix, Richmond just had their own $30 million fan-friendly renovation and while I’ve never been to Richmond, it sounds like an incredible place to watch a race. Another thing that may save them is they are a short track and NASCAR fans want more, not fewer short tracks. That should be enough to keep Richmond safe…for now.

Being out in the middle of rural Virginia, location may be an issue, but Martinsville has all the things that other two-race tracks have that would indicate they would keep a date. They have the history of Talladega, the renovations of Phoenix, and it’s a short track like Richmond. There’s just some reason in the back of my mind that thinks it’s a real possibility Martinsville could be down to one date but maybe I’m overthinking their situation.

Bristol is pretty much in a similar situation as Martinsville. The reason they’re in a slightly worse position is the perception of attendance. This isn’t a knock on Bristol, they get a lot of fans and despite how the stands look, has one of the highest attended races of the year. The problem is, the vast emptiness of the stands do not look good on TV no matter how fair or unfair that should be put on the track. NASCAR is considering a 70 percent attendance mandate that could bring penalties which might put Bristol in danger.

Can go either way

Pocono seemed to be aware of the position they were in. When you ask fans which track should lose a Cup Series date, Pocono tends to be a popular answer. Pocono is an acquired taste and while they sometimes get a bad rap and the racing is way better than people think it is, it’s not visually appealing on TV for some fans. Now, Pocono’s second race might hinge on how successful this year’s doubleheader is. In what seemed like a preemptive move to be the doubleheader guinea pig to avoid losing a date, things seem to be going well. The track has reported higher than average ticket and camping sales, so if the race goes as planned, this doubleheader may save Pocono and might be a glimpse into the future for other tracks.

Las Vegas is a destination city and considering there’s something going on in the city all the time, the cost to attend a race in Vegas isn’t as much as you would think. With NASCAR doing things like having their drivers do burnouts on The Strip and having a hauler parade (which had to be canceled this past week), it’s clear they have a soft spot for the city. The two things going against Vegas is attendance and it’s a 1.5 mile “cookie-cutter track” similar to other tracks on the schedule and that might cost them a date.

Texas has a similar problem to Bristol in that they typically have a higher attendance than most races on the schedule but given their capacity is so massive, it doesn’t look as great on TV. You can’t blame the track for a lack of trying. While some ideas like a wider Turn 1 and 2 and a steeper 3 and 4 might be a bit unorthodox, you have to credit them for trying. The issue is, it’s a 1.5 mile quad-oval and despite the slight differences to Atlanta and Charlotte, it’s still a quad-oval and fans have seen too many of them. If NASCAR wants to radically alter their schedule, Texas may be down to one race.

Dover seems to be slept on by many fans. It’s not usually the track fans will say has the most exciting racing but it’s got the closeness of short track racing with the speed of a speedway on its one-mile banked concrete oval. I won’t say it’s the most exciting but it’s certainly close to the top and it’s a track that looks like no other on the schedule. Like Pocono, Dover seemed like they knew they were vulnerable and moved their fall race to August so it was out of the NASCAR Playoffs. That may not have been by choice but it at least showed that Dover was willing to compromise to keep two dates. That’ll help but Dover is still likely at risk.

Living in Kansas City for a period of time, I know how important the speedway is to that area of the city. When it was built, there was nothing on that part of the Kansas side. Now, there’s an outlet mall and many retail stores and restaurants, in addition to an MLS (across the street from Turn 3) and Independent baseball stadium. Not to mention, there’s a casino off Turn 2. Kansas has a few things going against them like attendance and being a cookie-cutter track that it’s probably going to be a situation that Kansas can keep their Playoff date but lose the spring race.

It’s tough to come to reality but Michigan seems like it doesn’t have much going for them. The racing is great and the rules package has seemingly helped them but there’s an identical D-shaped oval in Auto Club and attendance is suffering. Racing in Michigan is still important for the manufacturers either by Ford and Chevy for winning in their backyard or Toyota wanting to deprive the competition of a win they really want but the track seems to be getting lost in the shuffle and could be an easy cut. Michigan probably would’ve benefitted from a doubleheader weekend.