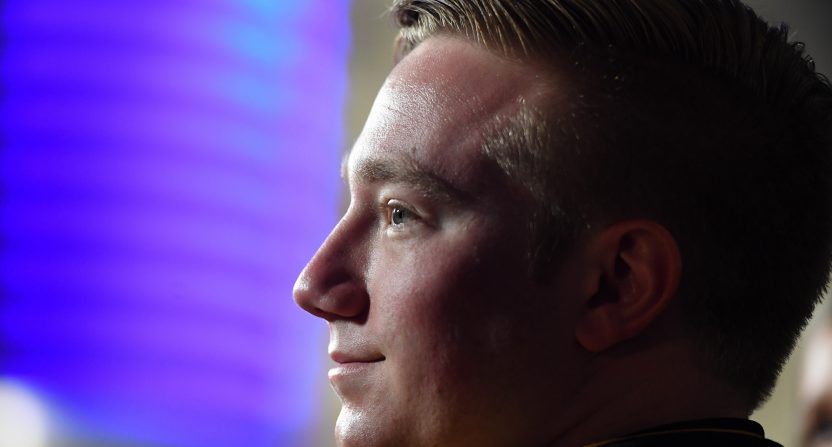 Tyler Reddick is entering one of the biggest weekends of his racing career. The defending NASCAR Xfinity Series champion left JR Motorsports after winning the title and is now at Richard Childress Racing. While Reddick is sticking in the Xfinity Series for 2019, he’s taking part in his first Monster Energy NASCAR Cup Series race this weekend in the Daytona 500.

Last season, Reddick didn’t have a conventional championship winning season. In fact, when the playoffs started, Reddick was over 200 points behind the point leaders. The season sure started as if it would lead to a title. After a marathon of a race at Daytona where it took four overtime periods, Reddick just barely outlasted teammate Elliott Sadler and won by a literal inch. The finish was the closest in NASCAR history and was so close that it registered .000 on NASCAR’s timing and scoring. NASCAR had to go even deeper and discover that Reddick won by four ten-thousandths (.0004) of a second.

Now in the playoffs, Reddick looked to go for wins and that kind of backfired on him. An inconsistent regular season containing a few crashes and no other wins hurt, but Reddick knew the playoffs meant a clean slate. For the playoffs, Reddick got it together, finished no lower than 14th, and got through each round. And then when the time came to attack and go for it, Reddick did just that at Homestead to win the Xfinity Series championship.

Tyler Reddick spoke with The Comeback during Daytona 500 Media Day. We discussed Tyler’s Xfinity title winning season, his move to RCR as they enter their 50th year in NASCAR, and making his first start in the biggest race of the year.

Phillip Bupp: As of this interview, we don’t know your starting spot (starting 39th) but we know you’re in the Daytona 500. What’s that feeling like, knowing you’re going to be starting in The Great American Race?

Tyler Reddick: It feels amazing, honestly. For AstraZeneca to come on board, be a part of our Chevy Camaro ZL1, and have the opportunity to make a first start with Richard Childress Racing in the Cup Series as well, it’s an amazing feeling. Just really excited for it to all get going.

PB: Your first Cup race is in the 500 with Richard Childress’ team who won last year. How’s your confidence level entering the weekend?

Reddick: It’s really high. I really enjoy the way these cars were running in the draft. I only got in a four car draft in practice on Saturday, but I really just liked how out of control these cars seem to be. Watching the Clash obviously, the fans may have been disappointed at times with the single file racing, but as a driver, it’s really exciting to see how challenging these cars can be to drive in that draft. I think once we get another 20 cars out there in that field for the 500 itself, it’s going to be a really good race. It’ll be enough cars to really mix it up.

But obviously the Duels, it’s kind of the same thing, it’s gonna be half the field and we’ll be starting ninth on the first one. So we just gotta take care of our car. We’re in the race, a good starting spot wouldn’t be bad, but we can definitely put ourselves in a worse spot by tearing a car up rather than trying to get something that really doesn’t mean too much in the grand scheme of things and how long this race is.

PB: And speaking of your team, Richard Childress Racing’s celebrating its 50th year and the team’s doing special paint schemes to commemorate that this weekend. What was it like to not only join such an iconic team, but to join the team in their 50th year?

Reddick: It’s pretty crazy. I’ve only been around 23 years, not even half the time the team’s been around NASCAR and winning races. So, that’s a really exciting experience for me to be able to make my first start for Richard Childress Racing, but it’s even more exciting to be able to be a part of the 50th year of the team.

And obviously, our cars in gold in the Cup Series, as well as on the Xfinity side. Our Pinnacle Chevrolet Camaro is gold and it looks really, really good. So I’m excited to get that thing on track later this week as well.

PB: Now, last year you had a pretty incredible Xfinity Series season, won arguably the two best races to win, Daytona and Homestead, capping the season off, beginning and end. The Daytona race was the closest finish in NASCAR history. How long did it take before you realized you had won that race?

Reddick: There were a few times that we came really close to the start/finish line on a couple of the overtime attempts where I was leading and I thought, “Okay, we finally won it that time.” And then my spotter Earl Barban would come on saying, ‘No, caution out before we got to start finish line, we gotta do that again.’ It’s like, ‘Oh my gosh.’

And it seemed like the race that would never end. I had the battery switched to the wrong position so the alternator wasn’t running. So our battery was dead and we were down on power. Didn’t have any fans cooling me off for the majority of that race. I was just in that car just baking. But it was all worth it in the end. We were able to somehow hold on for the victory even with all the things working against us. That was just a really good way to start the year and it put us in position to be aggressive at times when we probably shouldn’t have been. But at the end of the day, it all worked out for the best.

PB: This season you’re in the Cup car for Daytona, but you’re gonna be racing the entire Xfinity Series season. How do you feel that you have improved entering 2019, having a title under your belt, compared to entering the 2018 season?

Reddick: I think where I’ve improved is just better understanding how to run these races. I wasn’t helping myself with JR Motorsports any. By being super aggressive every single lap, tearing cars up, not bringing back pieces that we could continue to build on, we were just having to repair to get back to where we were at.

And that’s something I hopefully can take into RCR, with that mentality. Yeah, we wanna be aggressive and go for wins and win certain races if we feel like we have a good enough car to do so. But at the same time, it’s really important to keep the regular season championship in mind and try and get those bonus points that way. I feel like if we approach our races that way more, we’ll have better playoff points cushions going into it. And if we just be conservative, I think we’ll find ourselves in a position at the end of the race where we can be aggressive if we feel like it’s time to race that way.

PB: Your goal for this season? Wins, championship?

Reddick: All of the above. You don’t wanna come into here just chasing one thing. We won a championship last year in kind of a lackluster and just absolute disaster of a way to do it. We pulled it together right when we needed to.

This time around, I’d like to just keep that playoff mentality all year long. Yeah, we wanna win the races, but get the most out of each race so we continue to build the most amount of points possible. I feel like with the equipment that RCR has, we’ll be in just as many, if not more, positions to win as we were last year. And hopefully with a little bit more smarts instead of aggression on my side, we’ll be in those positions more often this year.

PB: Now, you’re young, moving up through the ranks, and you’ve already tasted success. Many fans are looking for someone to root for. What do you say to fans for them to get them to be a Tyler Reddick fan?

Reddick: Well, it’s hard for me. I don’t like to ever talk about myself [laughter], but I feel like one thing … whenever I loved watching dirt racing or certain drivers in open wheel and late models, I’ve always enjoyed watching the guys that are exciting to watch and are willing to do whatever it takes to win a race. Now, unfortunately for myself, that’s cost me a lot of race cars and a lot of top-five finishes over the course of last year. But it was exciting to watch at times. I just did some things that probably weren’t that smart, and if anything, they were entertaining and people got a kick out of watching me wreck or do something really stupid.

But, if anything, I try and be as entertaining as possible. Obviously I’m there to win a race. I’m not trying to put on some crazy show, but I try to have fun in the race car the most I can, and I’m willing to do whatever it takes. And more times than not last year it worked to my disadvantage. But, whatever it takes. If it comes on the last lap, I’ll probably do something really crazy to try and win the race. It may work out, it may not.