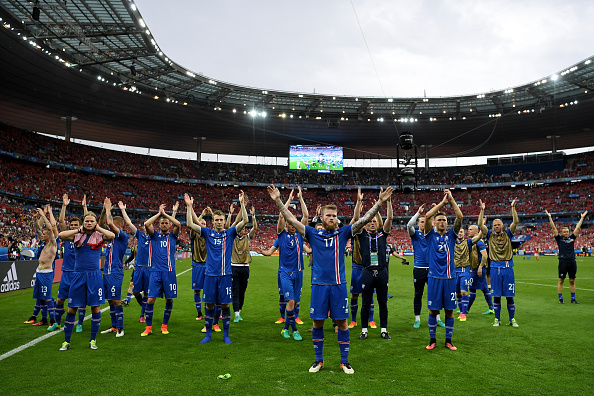 The Iceland National Soccer Team’s performance at Euro 2016 has been the story of the soccer of summer so far. Iceland have improbably advanced to the quarterfinals in their first-ever major tournament at Euro 2016, where they face host nation France this weekend.

Here’s why you should get aboard the Strákarnir okkar bandwagon.

Iceland were such rank outsiders that we didn’t even bother including them in our list of possible underdogs who could shock the world at Euro 2016 because they were one of the last hopes at 150-1 odds.  (At least we still have Wales and Poland going strong.) Only Albania, Northern Ireland, Hungary, and Romania had longer odds to win it all. One would have to think the bookies learned from putting Leicester City at 5000-1 and shortened some of those long numbers just a bit.

Many of Iceland’s players play professionally in Scandinavia, not exactly a hotbed of elite European football. Some of them even play in England. Not the Premier League mind you, but some of the lower divisions.

The fact that Iceland even got a point at the Euros was an astonishing achievement. After the tiny island nation celebrated a draw against Portugal, Cristiano Ronaldo dismissed Iceland and said, “I thought they’d won the Euros the way they celebrated at the end. It was unbelievable. When they don’t try to play and just defend, defend, defend, this in my opinion shows a small mentality and they are not going to do anything in the competition.”

It’s always nice to see someone prove Ronaldo wrong, which makes Iceland’s story even more endearing.  (We’ll get to the English later.)

2) The fans are insane

One of the main reasons why Iceland is so easy to cheer for is their awesome traveling fans. Sure, many nations are bringing hoards of supporters to France for Euro 2016 to cheer on their national teams. However, none can match quite the extent of Iceland’s commitment as the smallest country competing at the championships with a population of 323,000. (That ranks 175th in the world between the Maldives and Barbados for your information.)

Before the tournament began, the Iceland Monitor reported that almost 27,000 fans had applied for tickets – 8.15% of the population was going to go to France for Euro 2016. And that number has grown and grown as the team has advanced to the quarterfinals.

Imagine eight percent of the American population, 24 million people, moving en masse for something, anything, let alone a sporting tournament.

https://youtu.be/qeEJvdVpK8k
Then there’s the fans and their amazing support during the games, including the viral Viking chant that will either drop you into a deep trance, or make you want to quit your job so you can conquer the North Atlantic.

The chant was actually borrowed quite recently from Scottish Premier League team Motherwell. It is certainly working, though. Former England goalkeeper Peter Shilton even suggested the chant threw off the English players because they were so intimidated by it!

4) Did I mention the fans are insane?

The fans that stayed home in Iceland are just as equally committed as the Viking chanting traveling fanbase in France.

You could say soccer fever has swept upon the island nation, but that doesn’t even begin to describe just how mad the country has gone. For their quarterfinal match against England, the match earned a 99.8 share on Icelandic television. What does that mean? 99.8 percent of the television audience in Iceland was tuned to the match. 99.8 percent!!!! To put that in perspective, the Super Bowl got a 73 share last year.

The only question is what the other 0.2 percent of people in the country were watching — Icelandic Love it or List It? Icelandic Diners, Drive-Ins, and Dives? Come to think of it, both of those sound pretty compelling to watch… if they exist, of course.

5) … and the announcers are even more insane.

Gudmundur Benediktsson. Learn the name. Because he’s the new high bar for excitable announcers. Move over Gus Johnson and Andres Cantor, because it’s GUDMUNDUR’s world and we’re all living in it.

Surely Fox Sports can find a place in their soccer coverage for Benediktsson ahead of the 2018 World Cup.  I don’t even care if he speaks English or not.

6) One of their managers is a dentist

Iceland is unique in that they have two co-managers: veteran international coach Lars Lagerback from Sweden and local lad Heimir Hallgrimsson, who used to coach one of the Icelandic Premier League teams, Íþróttabandalag Vestmannaeyja, thankfully also known as IBV for anyone who actually is tempted to try to type out the whole thing.

Like most people involved in Icelandic soccer, Hallgrimsson also has another job. Before Euro 2016, he was working as a dentist.

“I used to work in the practice from around 8 a.m. until 3 p.m. before coaching IBV at 5 p.m.,” he says. “My whole day was work. When I started with the national team, I scaled it down and this year I’m hardly going to do any. I take a day here and there, maybe one a week or just a half to keep my hand in and my brain working, but I don’t book appointments in advance. I’ll just tell the girls in the office to fill the day, as there are a lot of people who will only have me working as their dentist.”

This is much of the charm about the Icelandic team. They all seem like normal people. Normal people who are turning the soccer world upside down.

Has there been any better entertainment than watching England react to the disgrace of watching their team lose to ICELAND of all countries? England acts like they invented the game (well, we can grant that to them, I suppose) and that has always given the country a sense of superiority over everyone else in the world, especially a country like Iceland.

Steve McManaman, who called the game for ESPN, butchered his former national side throughout the contest for their pathetic play. Perhaps that’s because before the game he said that the Iceland game was as good as a “bye” for England. It’s that sense of self-importance that always makes England’s exits from major tournaments so delicious for everyone outside the UK.  Just watch the BBC experts disgustingly throw the dirt on the Roy Hodgson Era.

#England, the only country that has left #Europe twice in four days. #Brexit #Iceland

So to see Iceland flip the script and pull off a big upset, especially against England, was pretty sweet for a neutral fan.

The prototypical underdog in soccer plays very defensively. The team will try to park the bus to defend their own goal, hope to get lucky and score on the other end, or maybe try to take their chances and win the game in penalties. It’s pretty much a survival tactic, and one where the team has to hold on and defend with lots of courage and lots of teamwork.

Iceland have defended as bravely as the Night’s Watch throughout the tournament. They’ve had no other choice. They rank last in passes attempted and completed. And they rank last in possession at 35 percent, a number that would probably only make Jose Mourinho proud.

And like any hopeful outsider finding success, Iceland have taken advantage of their chances. Iceland is fifth in Euro 2016 in scoring at 1.5 goals per game.

If they can keep this up, who’s to say they can’t beat France, maybe even beat Italy or Germany, and maybe even win it all? If Cleveland can win a championship, why can’t Iceland?