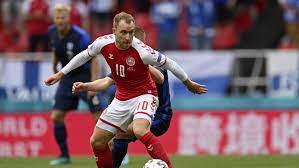 After Christian Eriksen’s collapse, criticism of UEFA has become louder and louder. Denmark coach Kasper Hjulmand said at a press conference on Tuesday morning: “I had the feeling that we and the players were being put under pressure.” It was “undeniable that we were given two options by Uefa. I was there. I know it. There were only two options. And it was very, very clear”. After it became clear that Eriksen’s condition was stable, UEFA had given both teams the choice of either playing the same evening or at noon the next day. Situations like this, prove that anything can happen during a match, so you should remember to bet on different Betting Sites for more chances of winnings.

Christian Eriksen faced the press and shared his first words after the incident at his last game. The Danish international wrote on Instagram: “Thank you very much for your great greetings and messages from all over the world. That is a great support and a big deal for me and my family.” He also sent a photo of Eriksen with his thumb raised and smiling on his hospital bed. The 29-year-old also wrote: “I’m fine – under these circumstances.” He still has to endure a few tests in the hospital, “but I feel okay. Now I will celebrate and share my joy with the guys from the Danish team at the next games. Everyone plays for Denmark”. Eriksen suddenly collapsed during the European Championship match between Denmark and Finland and had to be reanimated on the field.

Christian Eriksen spoke out from the hospital after his collapse in the European Championship game Denmark against Finland. “I wish to express my gratitude to everyone for their support. I will not give up. Now I’m doing better, and I want to find out what happened,” said the 29-year-old. This message quoted the Italian sports magazine Gazzetta Dello Sport.f Apparently, the message was addressed to his club Inter Milan, because as Eriksen further reported, the world of the Nerazzurri was very close to him and moved him. Eriksen suffered a cardiac arrest during the game on Saturday (June 12th, 2021) and was reanimated for minutes. Since then, medical experts have been puzzled as to how this came about. Eriksen himself is also looking for an answer, as he made clear in the message.

The Danish team doctor Morten Boesen confirmed at a press conference on Sunday that Christian Eriksen was close to death after his collapse on Saturday. “He was already gone. It was a cardiac arrest,” said Boesen. A defibrillator brought Eriksen back. Meanwhile, Eriksen’s attending physician, the cardiologist Jesper Kjärgaard, announced on TV2 on Sunday afternoon that the 29-year-old was still “stable”. There are also initial findings. According to Kjärgaard, the first tests confirm the suspicion of a heart attack. But he also stated: “I think he will definitely get back on his feet.” Eriksen is currently in the Rigshospitalet in Copenhagen. He will have to stay there for the time being for further investigations. The team doctor gives the all-clear after Eriksen’s collapse. “I spoke to Christian a few times today. He is stable and, given the circumstances, he is doing well,” he explained, and: “The results so far are okay.”

He also confirmed that Eriksen was in contact with his teammates. The 29-year-old will remain in the Copenhagen hospital for further examinations. Sports director Peter Möller said that the entire Danish team held a video conference with Eriksen in the hospital on Sunday. “The whole football team was happy to hear from him and to know he was doing better. ”It was the best thing for me to see Christian smile,” added coach Kasper Hjulmand.

One day after his collapse at the European Championship game Denmark against Finland, Christian Eriksen is in a “stable” condition. In a conversation on Sunday morning (June 13th, 2021), the Inter Milan midfielder greeted his teammates, as the Danish Football Association DBU announced. The 29-year-old is still in the hospital. As the DBU further explained, the team and the support staff receive crisis support, they want to be there for each other. In addition, the association thanked Eriksen for the warm greetings and well-being wishes from fans, players, clubs, associations, and royal families.

After Christian Eriksen’s collapse at the European Championship game Denmark against Finland on Saturday evening, Inter Milan’s managing director Beppe Moratta has now given the all-clear. “He’s doing a lot better. What was amazing is that he sent a message in our internal inter-chat. He gave the team some comfort and reassured them by telling them that he will be back soon,” said Moratta on the Italian TV channel Sky Sport. Eriksen is currently under contract with Inter. According to Moratta, Eriksen sent the message a few hours after his collapse. The Danish association announced that evening that the 29-year-old was conscious and in a stable condition. According to Moratta, Inter is in close contact with the Danish doctors. Moratta didn’t know why Eriksen suddenly collapsed either, but: “He wasn’t sick with Covid, and he wasn’t vaccinated either.”

After this incident, there has been some criticism of ZDF and its reporting. The accusation: the broadcaster should have stopped the transmission much earlier. The day after that, the question also arises: Why was the EM game Denmark Finland continued despite the Eriksen collapse? The Danish national coach Kasper Hjulmand then tried to find an explanation.