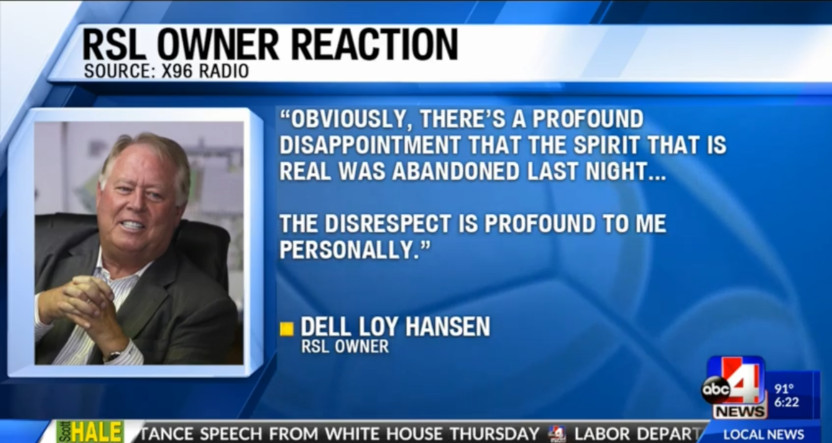 The saga of Dell Loy Hansen’s controversial ownership of MLS’ Real Salt Lake, the NWSL’s Utah Royals, and the USL Championship’s Real Monarchs is coming to an end. Hansen started as a minority owner with Real Salt Lake in 2009, but took full control in 2013, and he created particular backlash this week when he complained about RSL players’ protest Wednesday that led to their match against Los Angeles FC being postponed (one of five postponed MLS matches that night) on a local radio station he owns, saying “It’s like someone stabbed you and then you’re trying to figure out a way to pull the knife out and move forward.” and “The disrespect was profound to me personally.”

Those comments from Hansen led to The Athletic running a detailed piece on him, complete with multiple allegations of racist remarks he’d made towards players, staffers, agents and others over the years. That piece included former RSL head scout Andy Williams saying “He’s a fucking racist, to be honest.” and “It’s Donald Sterling part two.” And that piece led to both MLS and the NWSL announcing investigations into Hansen, and on Sunday, that led to MLS putting out a statement that they’d been informed Hansen would be selling all three of his teams:

MLS will work with Mr. Hansen on supporting the sale efforts for the company and will work closely with the club’s executive staff to support the operations of the team during the transition period.

I want to acknowledge Dell Loy Hansen’s significant efforts to build the sport of soccer in the state of Utah and for his commitment to Major League Soccer.

The NWSL added its own statement:

And Hansen also put out his own statement:

To the RSL Community –

I recognize that at times I have spoken too quickly, without pausing to consider the feelings or good intentions of others. This is not acceptable and I assume full responsibility for allowing my words to travel unfiltered as to their significance and impact.

I believe that communities are strengthened by diversity. I am truly sorry for offending and being insensitive to the plight of others. I seek to do better and commit to supporting and improving diversity and inclusion in my own community going forward.

After deep consideration and soul-searching, my wife Julie and I agree that the best way forward for the Real Salt Lake family is to assume new ownership and a refreshed vision. We are fully invested in supporting the transition to new ownership and will work diligently to try to ensure that the Club stays within our community. We will support the organization and its employees in moving quickly so as to minimally disrupt this season and allow new ownership adequate time to plan for the 2021 season.

Real Salt Lake has our full support. We have been blessed with loving friendships that are expressed daily. These will be sorely missed. We love our community and our family and sincerely hope for the best outcomes for each. Know that our hearts will always bleed Claret and Cobalt.

It’s quite a turnaround to see Hansen selling these teams only days after his latest controversial remarks and the announced investigations into his ownership. But this seems to make some sense given the severity of the past allegations against him, and also given the inflammatory nature of his remarks this week, which would seem to make it very difficult for RSL players to play for a team he owned. We’ll see who winds up buying these clubs.