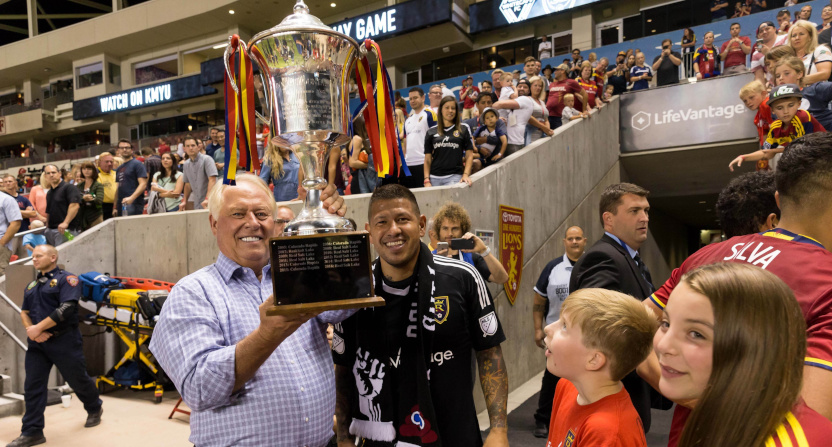 Player protests in the wake of the police shooting of Jacob Blake have postponed numerous games in many sports over the last two days, from the NBA (where the Milwaukee Bucks kicked all of this off) to MLB to the NHL to tennis to the WNBA to MLS. But in MLS and the NWSL, that’s spawned some significant backlash against Dell Loy Hansen, the owner of MLS’ Real Salt Lake and the NWSL’s Utah Royals.

On Wednesday night, after Real Salt Lake’s game against LAFC was postponed (one of five MLS matches postponed on the night), Hansen (seen above in 2017, at left with Nick Rimando and the Rocky Mountain Cup) went on Salt Lake City radio station X96 (one of several local radio stations he owns) on the Radio From Hell show, and issued some remarkable comments against his own players. As relayed by Alex Vejar of The Salt Lake City Tribune, Hansen not only criticized his players for their protest, but bashed them for doing so during the first game during MLS’ resumption where the club was supposed to have fans (5,000, much less than their usual stadium capacity), and said that decision meant that Real Salt Lake wouldn’t try to have fans going forward and would remove the recently-furloughed employees they’d brought back in anticipation of again having fans:

“It’s a moment of sadness,” Hansen said. “It’s like someone stabbed you and then you’re trying to figure out a way to pull the knife out and move forward. That’s what it feels like. The disrespect was profound to me personally.”

…“Obviously the importance of bringing community together during COVID was not respected,” Hansen said.

…“We will not be inviting fans back to the stadium in the future, so tomorrow … I start cutting 40 to 50 jobs again,” Hansen said. “We would not go through the risk of inviting people back to have that kind of an outcome.”

…“They supported other issues nationally, but they clearly did not support our city nor our organization,” Hansen said. “That’s fairly clear.”

On Thursday, X96 deleted that audio, but the damage was already done. Those were some incredibly tone-deaf comments from Hansen, and as a The Athletic article Thursday illustrated, they’re not the first tone-deaf comments he’s made. Some selections from that article, including quotes from former RSL player and head scout Andy Williams:

“That’s just how he is,” said Williams, who is Black. “He’s a fucking racist, to be honest. I’ve been in situations where it’s like (former LA Clippers owner) Donald Sterling. He says something, and it’s like, ‘Oh my God, what did he just say?’ It’s Donald Sterling part two. It’s just unbelievable. It’s crazy how he doesn’t see that the stuff that he says affects people.”

… Williams, the coaching staff and the club’s equipment manager, Kevin Harter, were getting into a car when they were approached by Hansen and his then-wife. Hansen called out to Harter, who is of Middle Eastern descent, about a dispute that had arisen between Harter and an intern on the athletic training staff. At some point during his conversation with Harter, Williams said, Hansen used the n-word.

And it’s not just Williams; that article is full of well-sourced problematic comments from Hansen. And that led to both the MLSPA and the NWSLPA calling for an investigation:

Meanwhile, both MLS and the NWSL confirmed they are launching investigations into Hansen. Here’s the MLS statement:

We are deeply concerned about the allegations made in a report published this evening concerning language used by and the conduct of Real Salt Lake owner Dell Loy Hansen. Major League Soccer has zero tolerance for this type of language or conduct and will immediately commence an investigation.

And here are the NWSL statements:

We’ll see what that leads to. But it certainly doesn’t seem to bode well for Hansen’s long-term status with these leagues.