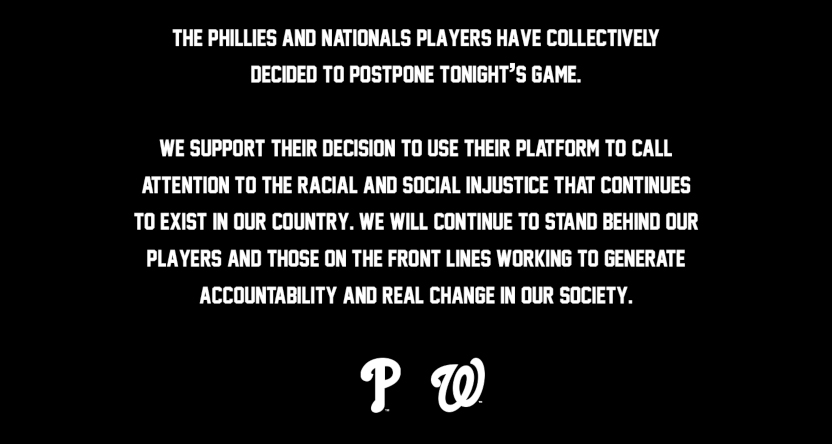 Large parts of the sports world wound up on pause Wednesday and Thursday following the NBA’s Milwaukee Bucks’ decision not to play Game 5 of their playoff series against the Orlando Magic in protest of the police shooting of Jacob Blake in Kenosha,Wisconsin. In Major League Baseball, three games were postponed Wednesday after players voted not to play, and players on other MLB teams sat out as well.

On Thursday, the NBA, NHL and tennis all decided not to play, but MLB left it up to individual teams. But enough MLB teams opted out that at least six games won’t be played Thursday. ESPN’s Jeff Passan listed four early ones Thursday afternoon, including two (Phillies-Nationals and Rangers-A’s) that were supposed to air nationally on the Fox broadcast network:

Following a day in which three MLB games were postponed, at least four games will not be played tonight:

Later, the Arizona Diamondbacks and Colorado Rockies called off their game as well:

We stand with our brothers at the @Rockies. https://t.co/4RO8Cdhz1o

And the Florida Marlins-New York Mets game didn’t happen either:

The Mets and Marlins held a 42-second moment of silence, put a Black Lives Matter T-shirt over home plate and then left the field.

And a joint statement from the Red Sox and Blue Jays:

Tonight’s game between the Boston Red Sox and the Toronto Blue Jays has been postponed. pic.twitter.com/K5YqRm9SCF

Meanwhile, the Tigers only tweeted that the game had been postponed:

Tonight’s game between the Tigers and Twins has been postponed and will be made up as part of a traditional doubleheader tomorrow, starting at 1:10 p.m.

Statement from the Oakland A's pic.twitter.com/PkCtGpBUIS

And here’s the Rangers’ statement, which makes it clear their postponement was a decision by the A’s players:

Similarly, the Diamondbacks made it very clear their postponement was because of the Rockies:

The Diamondbacks put out this statement about today's game. pic.twitter.com/cBGXXX3IM8

Archie Bradley and Jon Jay spent a long time talking to the media voicing support for not playing and how it would draw attention toward the issue of racism. Bradley even said the decision was mutual between both teams. The way that statement hangs them out to dry is baffling.

The Marlins-Mets’ situation is an unusual one, as Mets’ GM Brodie Van Wagenen’s comments ahead of an official pre-game presser (which were put out on the Mets’ app and website) suggested that their players didn’t want to play, and that MLB commissioner Rob Manfred was trying to force them to play after a symbolic hour delay. Van Wagenen later issued a statement saying that he misinterpreted, and that that idea actually came from Mets’ owner Jeff Wilpon:

A statement from #Mets GM Brodie Van Wagenen. Interpret how you must. pic.twitter.com/p6wmlbVzTD

It’s also notable that Friday, Aug. 28, is Jackie Robinson Day, and that the Players’ Alliance (a group of current and former Black MLB players) announced they’ll donate their salaries from Thursday and Friday “to combat racial inequality and aid Black families and communities.” Here’s the full statement there:

In their own words: pic.twitter.com/d5erHnQQdp

We’ll see if any further games are postponed.