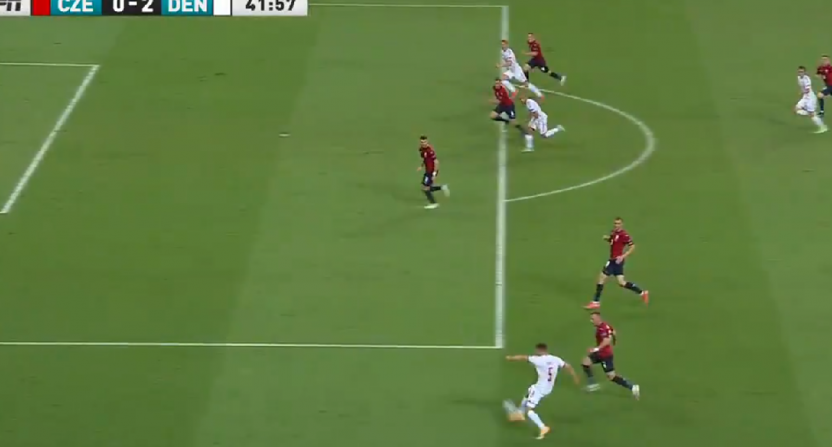 Denmark has been the story of Euro 2020.

They would have perhaps been regardless, due to the near-tragedy of Christian Eriksen’s opening match cardiac arrest and on-field resuscitation, but they’ve managed to eclipse that narrative thanks to their stirring run of play. That continued today, in a pivotal quarterfinal match against the Czech Republic, a match the Danes started in stunning fashion with a fifth minute goal.

That goal came after a questionable officiating decision to award Denmark the corner to begin with, too, which had to be extra frustrating for Czech supporters.

It was Denmark’s second goal (the eventual winner) that was the true stunner, though, and one of the prettiest goals you’ll ever see. (Unless you can’t appreciate a first-time outside of the boot cross that’s volleyed into the net, and if you can’t appreciate that it feels like you probably didn’t click on this post to begin with.)

Denmark are creating a summer to remember! 🇩🇰 pic.twitter.com/UqSq9TqfpR

The Czechs put up a hell of a fight, especially given that early deficit. They pulled one back in the second half via a nice goal of their own from talismanic scorer Patrik Schick:

Czech Republic are back in it! 🇨🇿 pic.twitter.com/DXKHq1zvJv

But in the end, after a few more Czech shots went wide, Denmark officially punched their ticket to the semifinals. That’s an incredible run, especially given how their tournament started. (Let’s not forget that Eriksen is an incredible player, too; deep trauma aside, they’re doing this without a key part of their side.)

They’ll now face the winner of England-Ukraine for the chance to go to the Euro final. Any one of those three teams brings their own narrative to the table there, but it’s hard to cheer against Denmark at this point. It might be even harder to bet against them.