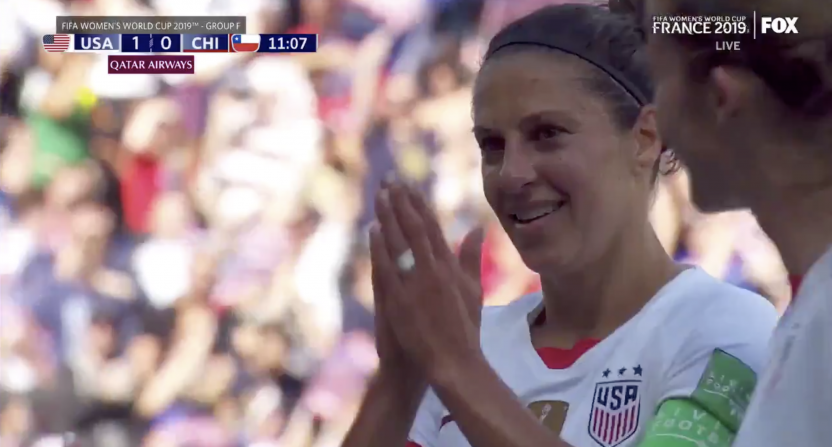 Chile gave the United States a more physical test than their first group stage game but the USWNT remained in control and won 3-0 at the Women’s World Cup. The USA took control and scored early, before goalkeeper Christiane Endler could get going. She inevitably made some tremendous saves but it was too little, too late as the USWNT was already ahead by then.

USA’s first goal came from a legend. While she has been more of a super sub, Carli Lloyd took advantage of a start up front and beat teammate Julie Ertz to the ball to put USA on the board just 11 minutes in. With that goal, Lloyd broke a Women’s World Cup record by scoring in her sixth consecutive World Cup game.

WHAT A GOAL FROM CARLI LLOYD! 💪🇺🇸

Dream start for the USA! pic.twitter.com/txYUkQTCTN

Chile almost got a shock equalizer after getting behind the backline on a set piece. Luckily for the United States, Chile was offside but goalkeeper Alyssa Naeher didn’t know that and really struggled to get to that ball. Goalkeeping may be the key for other teams to focus on if they want to beat the United States.

Nervy moment for the U.S. defense! 😳

Chile have the ball in the back of the net off the free kick, but Guerrero was offside by a couple steps. #FIFAWWC pic.twitter.com/xws82zwr8O

Ertz got another shot and that proved true, heading in a ball with the back of her head. The difficulty of making this work is tremendous but Ertz made it look easy for a 2-0 lead.

Stop us if you've heard this before… Julie Ertz at the near post! 😉

She scores her 1st career #FIFAWWC goal to double the @USWNT lead! pic.twitter.com/S2DpnurNdf

Lloyd got her second of the game on a header as well. Set piece attacking was crucial for the United States early on and they showed that here. Especially with 20-year-old Tierna Davidson providing the service on her World Cup debut. Davidson would end the game with _ assists.

Her second goal of the game makes it 10 for her #FIFAWWC career and puts the @USWNT up 3-0. 🇺🇸🇺🇸🇺🇸 pic.twitter.com/aM9lWOyjVL

Even though the game was all but out of reach by halftime, that wasn’t the end of the fireworks. After a lengthy review, it was ruled that Lindsey Horan was fouled. She was brought down on the edge of the box so it wasn’t sure if she was inside, outside, or on the line but the ref overturned her call and ruled a penalty. Lloyd had a chance to complete her hat trick and replace Brazil’s Cristiane as the oldest player to score a hat trick but pulled her shot wide.

Lloyd’s penalty highlighted the strength of Chile’s goalkeeper Christiane Endler. Ignore the scoreline, the PSG keeper may have been the best player on the field for both teams. That sounds like a hot take but consider the exquisite saves Endler had and it’s easy to think the United States could’ve scored at least a few more.

WHAT A SAVE! Lindsey Horan has goal No. 4 on her foot but Christiane Endler comes up with a kick save and a beauty. #FIFAWWC pic.twitter.com/0BREXwNgQ1

The Chile goalkeeper is standing on her head, this time robbing Christen Press. #FIFAWWC pic.twitter.com/xdmRTyIvc8

With the win, the United States are in the Round of 16 and face Sweden in the final group stage game. With Sweden and USA both at six points, the winner will win Group F. And since the United States won 13-0 against Thailand, they have a higher goal differential and will advance with a draw. No offense to Thailand and Chile but Sweden, a top ten team, will be the first big test for the United States.