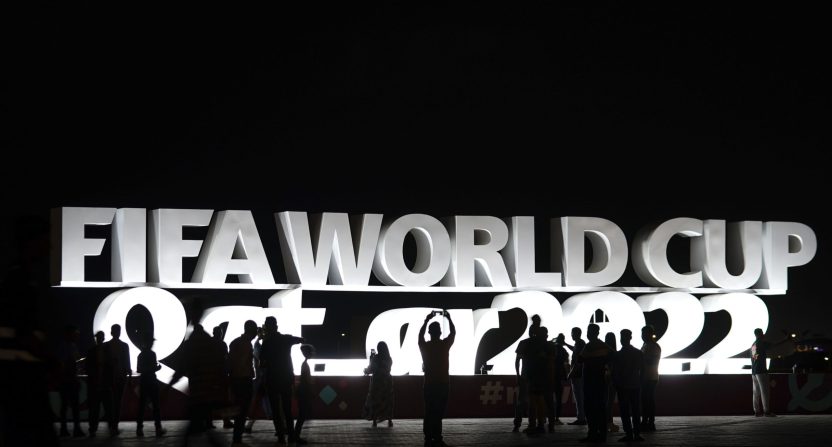 Some people watch soccer year-round and at all hours of the day. Most people tune in occasionally for major tournaments like the FIFA World Cup. If you’re in the latter group, this is your primer. Use it to sound like you know what you’re talking about at your holiday party or local bar this World Cup season.

Is the World Cup always in the winter?

Nope. This is the first time. Every previous World Cup has been during the summer. After the tournament was controversially awarded to Qatar, discussions were had about the climate impacting the schedule. Qatar averages a temperature of 108 degrees in the summer, and that’s just too hot to play. The change to winter forced many major soccer leagues to alter their schedules by starting their seasons late and/or ending them early to account for the six-week break. It does make for a packed holiday sports schedule even though Fox still probably would’ve preferred the summer due to showing American football.

How many people watch the World Cup?

FIFA is projecting this year’s World Cup will have 5 billion viewers. That’s a big jump from the 3.5 billion that tuned in during the 2018 edition in Russia. For context, Super Bowl LVI, featuring the Cincinnati Bengals and the Los Angeles Rams, reached around 208 million people worldwide, per the NFL. Sure, that’s only one game compared to a month-long tournament, but it’s safe to say the World Cup has a significantly larger audience.

How many countries have won the World Cup?

Only eight. And they’re all in South America or Europe. Brazil leads the way with five, most recently in 2002. Germany and Italy have four apiece. France, Argentina and Uruguay have all won twice while Spain and England each have lifted the Cup once. Only five other nations have made it to the final – Netherlands, Czechoslovakia (not even a country anymore!), Hungary, Sweden and Croatia.

Fun fact – if you count the English Channel as a border, all eight winning countries share a border with another winning country.

How many World Cups have there been?

This will be the 22nd edition of the world’s biggest soccer tournament. The first World Cup was held in 1930 and it’s been played every four years since then with the exception of 1942 and 1946. Those events were canceled because of World War II. This is the second World Cup in Asia after Japan and South Korea co-hosted in 2002.

Which countries have hosted the World Cup?

Qatar will be the 18th country to host a World Cup. Five nations – Brazil, France, Germany, Italy and Mexico – have hosted twice. Other hosts include Argentina, Chile, England, Japan, Russia, South Africa, South Korea, Spain, Sweden, Switzerland, Uruguay and the United States. Colombia was supposed to host in 1986 but had to withdraw due to financial reasons.

The USA, Mexico and Canada will jointly host the 2026 World Cup, the first time three nations have combined to host the tournament. It will be Mexico’s third time hosting and USA’s second.

To get here, each team had to go through their respective federation’s qualifying phase. The 32 that made it here are placed into eight groups of four teams. Up first is the group stage. Each team plays three matches. A win is worth three points, a draw is one and a loss is zero. The two teams with the highest point total in each group advance to the knockout round. If two teams in the same group are even on points, goal differential (goals scored minus goals conceded) breaks the tie. A total of 16 teams advance.

Once we get to the knockout rounds, it’s win or go home. Tie games after 90 minutes go to a 30-minute extra time period with teams switching sides at the 15-minute mark. There’s no more golden goal walk-off win, so the full 30 minutes are played. If one team is ahead at that point, they win. If it’s still deadlocked, we go to a penalty shootout. In a best-of-five, the two teams alternate taking a penalty shot until a winner is decided. If it’s even after five rounds, penalties continue until the tie is broken.

This is the last World Cup with 32 teams. In 2026, the competition will expand to 48 teams with 16 groups of three followed by a 32-team knockout round.

What time are the games?

The tournament kicks off Sunday, November 20 at 10 a.m. ET with host nation Qatar facing Ecuador. Then we have multiple matches a day for a couple of weeks. Qatar is GMT +3, or nine hours ahead of U.S. Eastern Time. Here are the kickoff times for each day of action.

What channel is the World Cup on?

All the matches will be televised in the U.S. on FOX or FS1 in English. They’ll also be on Telemundo and streamed on Peacock in Spanish. Here’s a guide to the broadcast teams and studio hosts and who is announcing which games.

Who are the best teams and players?

Judging by the betting odds to lift the cup, all the usual suspects are in the mix this year (all odds via DraftKings):

But sometimes an underdog makes its way to the final. Could this be the year?

Nearly all of the world’s top players are here, hoping to lead their nations to glory. Names you can expect to hear include Kylian Mbappé and Karim Benzema of France, Neymar and Gabriel Jesus of Brazil, and Harry Kane and Raheem Sterling of England. Of course, we can’t forget Cristiano Ronaldo and Lionel Messi. Both are well into their 30s and looking to win their first World Cup in what is very likely their last chance to win with Portugal and Argentina, respectively.

How good is the USA?

It depends on who you ask. Based on the same betting odds above, the U.S. Mens National Team is near the middle of the pack to win the whole thing at 130-1. In a group with England, Wales and Iran, the USMNT has a good shot to advance to the knockout round.

The American squad is young, but talented and has several players on big European clubs. Many of them were part of a special summer of 2021 where they defeated rival Mexico in both the Concacaf Nations League and Gold Cup finals. The World Cup qualifying phase was up and down, and they finished third behind Canada and Mexico but scored enough points to qualify for the World Cup.

The World Cup is a massive step up compared to qualifying and continental tournaments. So while this team is talented, it’s untested at the highest level. A good showing would give them strong experience and create optimism heading into 2026.

The best the USA finished was 3rd in the first World Cup in 1930.