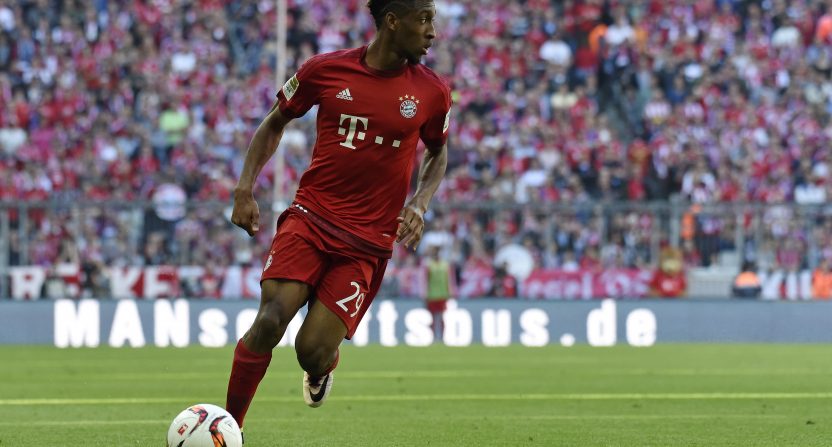 Bayern Munich exercised their option to make the loan of Kingsley Coman a permanent singing on Thursday. The club had a two-year loan agreement with Juventus that would see the French winger move to the Allianz Area permanently for 21 million Euros. It’s now official.

Over the past few seasons, Bayern has looked to replace longtime wingers, Franck Ribery and Arjen Robben. When Coman arrived on loan in 2015, he along with Douglas Costa were seen as the heirs to the “Robbery” throne.

But old habits die hard, and Bayern has had trouble moving on from the Champions League winning duo. Coman has not played much this season. The 20-year-old only has two goals this season compared to six in 2015-16. By all accounts, Coman has regressed this season under Carlo Ancelotti. To be fair, Coman was sidelined thanks to an injury, but upon return, he struggled for minutes

By no means is Coman’s permanent signing a bad decision. 21 million Euros for such a young player is a steal in today’s age of massive transfer fees. However, given his form, and Ancelotti’s aversion to using him in big moments, he might not be the future in Munich.

Bayern could sell Coman for much more than the 21 million they paid to get him. From strictly a business standpoint, it might be wise to move him early while his price is still high. The thing is, Bayern doesn’t need the money. So in sporting terms, having a potential star at 20 is a no brainer. But Coman needs to continue to develop and he can’t do that on the bench.

Unless some club comes in with a mega offer that Bayern simply can’t refuse, then Coman isn’t likely to be going anywhere soon. Bayern’s CEO Karl-Heinz Rummenigge said that he viewed Coman as a promising player that will help Bayern in the coming years. That must be encouraging for Coman to hear, but a far cry from what has happened on the pitch.

Since the start of 2017, Coman has been on the pitch for 499 minutes out of a possible 1,890. Franck Ribery, at age 34 has been frequently picked ahead of Coman. Ancelotti even criticized the play of his aging winger this past week, yet opted for him in a loss to Dortmund in the German Cup. Coman, meanwhile, watched Bayern fall apart in the second half from the stands.

Bayern has stumbled repeatedly over the past few weeks. They’ve only won once in their past seven matches. A lot of criticism has been thrown towards Ancelotti, whose squad rotation has been lacking. The Italian manager seems to prefer using the older, more experienced players. Robert Lewandowski was still on the pitch for some reason when Bayern was 3-1 up against Dortmund in a Bundesliga game that meant little. The Pole hurt his shoulder in the dying minutes and missed the first leg of their Champions League round against Real Madrid.

Going back to Bayern’s young talent, Renato Sanches and Joshua Kimmich have also seen their playing time take a noticeable hit under Ancelotti. Sanches, in particular, has only played 188 minutes in 2017.

Rummenigge has publicly backed Coman but has also thrown his support to Ancelotti. This might cause some concern for the winger. Robben and Ribery have both expressed interest in returning for another season. If Ancelotti continues to prioritize experience, it could be another rough season for Coman.

Bayern is hoping that Coman and Ancelotti can co-exist a little better next season. With the clubs current campaign beginning to come off the rails, many of the side’s stars are looking tired. Coman and the other youngsters at Bayern, they’ve been left out in the cold. For the young French star, the 2017-18 season could be critical for his development. If he’s going to usurp Ribery on the field, he’s going to need to be given the playing time. Ancelotti is going to have to give him those opportunities.

If Coman’s current form continues into the next season, Bayern will have to think about trying to get a return on their investment, and they will have wasted a potentially huge talent. But for a club trying to find the next Ribery, that scenario could be much more damaging than losing 21 million euros.