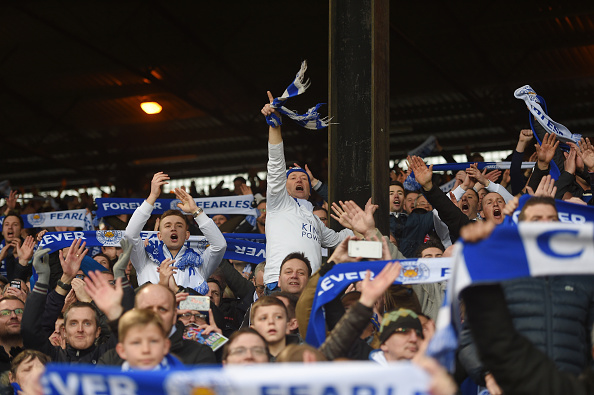 Four days ago on May 2, Leicester City made history by winning the Premier League. For virtually the entire season, the club practically sat atop the league which includes powerhouses Arsenal, Liverpool, Chelsea, Manchester United and Manchester City, but never let go.

Nearly a year ago before the season began, British bookmakers gave Leicester City 5000-1 odds to win the title. According to the Wall Street Journal, they were just hoping they could take money from people silly enough to bet on the Foxes.

That was a bad mistake by the bookmakers. A few lucky fans took advantage and betting houses in the United Kingdom lost around $15 million on Leicester City’s title. Ladbrokes specifically lost $4.35 million, according to the company. The betting company William Hill said these were the largest odds it has ever paid out.

“It is highly unlikely you will see 5000-to-1 for teams to win the Premier League next season or any time soon,” Ladbrokes spokeswoman Jessica Bridge wrote in an email to the Wall Street Journal. “I would estimate 1000-to-1 or 2000-to-1 would be the longest.”

In the United States, a professional sports team hasn’t had odds like Leicester City did in years. Right now, the Cleveland Browns are listed at 200-to-1 to win the Super Bowl. In Las Vegas sports books, the only time a team will have odds in the thousands is usually a 16-seed in the NCAA tournament.

Said Jay Rood, the vice-president of Race and Sports Book for MGM Resorts: “we’ve always been kind of amazed at some of the prices that come out on EPL teams.”

“That’s where [Vegas] got nailed,” Rood said. “The days of putting [long odds] up because it seems absurd that they could win, I think those days are long gone.”

As for the 2016-2017 Premier League, right now Norwich and Sunderland are being given the highest odds at 2,500-to-1 to win the Premier League. However, the pair may be relegated this month in which case the odds would no longer matter.

What makes this so rare is that Leicester City isn’t the traditional powerhouse. In fact, this was the club’s first title ever, becoming the first club to win the league for the first time since Nottingham Forest in 1978.

“We’ve had our fingers burnt a little but 5000-1 was the correct price at the time,” a Ladbrokes spokeswoman wrote. “Leicester were 5000-to-1 for a reason, as were Sunderland and Aston Villa—and look where they both are now.”

Aston Villa has clinched relegation for next year while Sunderland is in 18th out of 20 and could be relegated as well if they slip into 19th.

The United States betting comparison to the Premiere League according to Rood would be the NBA. Because of the top-heavy teams in the league, people don’t typically bet outside of a handful of teams.

“You’re not going to get money on those teams…unless you offer something in the realm of ridiculousness,” Rood said.

Due to the top heavy nature of the Premier League, Leicester City finds itself in a funny spot for 2016-2017 Premiere League odds. Right now, some bookmakers have given them not only a 25-to-1 line at repeating, but also 16-to-1 odds to be relegated.