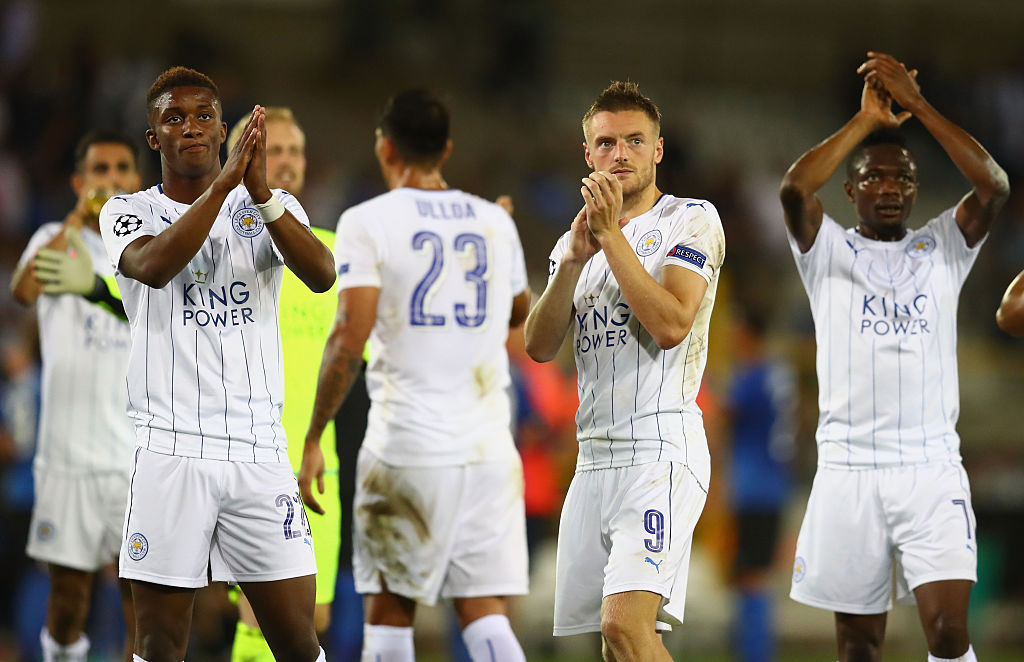 In a lot of ways, it was classic Leicester City, even on a new frontier. They traveled to face a far more experienced team, were out-possessed by two-thirds, yet outshot Club Brugge 7-2 in on-target attempts, and left Belgium with a 3-0 win and three points in their Champions League debut.

Probably not. The chances of Leicester repeating as Premier League champions is as infinitesimally small as winning it the first time around was. Smaller, actually, considering the odds of winning back-to-back league titles are tiny even for the biggest and best of clubs. But what of Leicester’s first Champions League campaign, its debut at Europe’s highest level?

An early Marc Albrighton tap-in, a Ryad Mahrez freekick and a Mahrez penalty got the Foxes off to a dream start, but there remains the sense that they had better make the most of this thing, because it could very well be the last time around. For a very long time, at least.

Riyad Mahrez with the goal of the night in Leicester City’s #UCL debut. #UCLonFOX https://t.co/BurroeHOvL

Perhaps the Leicester bubble has already popped. Losing your league opener to Hull City will leave that impression. And if a tie with Arsenal and a win over Swansea were creditable, the 4-1 destruction at the hands of Liverpool on the weekend shattered any remaining illusion that this season and last season would be one and the same.

This is true. It’s also true that Ranieri said much the same thing last year, even as the Foxes bore down on the title. All along, he maintained that their primary objective was to avoid relegation. In this continental campaign, he has once again anointed survival as the objective. “I want us to be playing on beyond December and in the knockout stages,” Ranieri said. “The target now is to try and go to the knock-out, if it is possible. If not, we need to achieve third position [to reach the Europa League] because we need to make experience. We would like to write some new history for Leicester.”

Ranieri, in that sense, has remained ever the realist, no matter the magic that has unfolded all around him. “Now is the right moment to say, ‘Hey, forget the fairytale.’ It is a new season. Everything is new,” he said. “We won the title. Now we restart, don’t think what happened last season. Restart to be safe [from relegation].”

But if the Italian manager is once again downplaying his team, his players are no longer buying it. “Can we win it? Why not?” said captain Wes Morgan. “No one thought we could win the Premier League, so we have already shown what can be done.”

“I’d be daft if I said we can’t win it,” added midfield titan Danny Drinkwater. “I think everybody would have thought we couldn’t win the Premier League and we did it. We don’t want it to be the first and last time we are in the Champions League.”

That’s just the thing though, Danny. It probably will be. It’s early in the Premier League season, of course. And Leicester’s stumble could be just that, a stumble. But Manchester City are playing on an entirely new level under Pep Guardiola. Jose Mourinho has rejuvenated Manchester United. Arsenal, Chelsea and Liverpool won’t be having such a down year again. Tottenham Hotspur have already shown they were no fluke last year. Everton has improved tremendously.

Never mind winning another Premier League title, Leicester will do very well just to make it back to the Champions League. In fact, thanks to its soft group stage draw of Club Brugge, FC Porto and FC Copenhagen – courtesy of Leicester’s inclusion in Pot 1 for the draw in spite of its non-existent UEFA coefficient, courtesy of its English domestic title – its chances of survival through the winter are fairly strong. The Foxes, then, are more likely to get to the knockout stages and perhaps catch lightning in a bottle again and go on a run than they are to get back to the Champions League anytime soon.

On some level, the players must know this, in spite of their public bravado. They’ve certainly been instructed in the virtues of positive thinking. But they can’t have taken leave from reality altogether, or even sufficiently far to think that they’ll somehow forge a path through Barcelona, Real Madrid, Bayern Munich and Paris Saint-Germain.

A win over Club Brugge is a nice start, but the Belgian league is a shell of what it was in its 1980s and early 1990s heyday.

Leicester in Europe is sort of like the proverbial kid in the candy store. It knows it’s about to get caught and kicked out, never to be let back in. It will make the most of its time there, gobbling up all the achievements it can, because its entrance will surely be revoked soon.