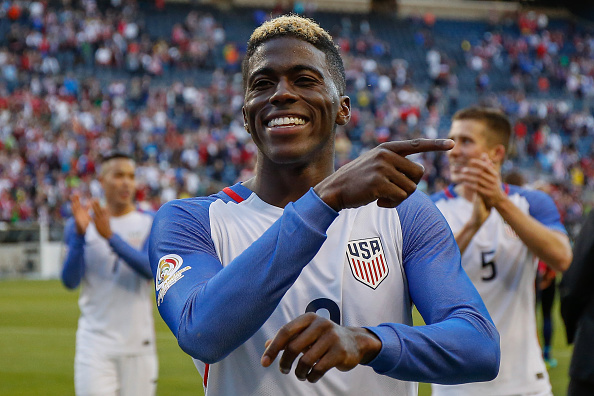 The United States Men’s National Team has advanced to the semifinals of the Copa America for the first time since 1995, thanks to a great performance by both of their strikers in a 2-1 victory over a speedy Ecuador squad.

The USMNT scored a massive victory Thursday night. Playing great football in the first half en route to a 1-0 halftime lead, the second half saw the game open up when both teams were reduced to 10-men. Each teams scored after the red cards were issued, but the Americans were able to hang on for the 2-1 win, earning a place in Tuesday’s semifinal.

Ecuador got the first chance of the match, as Carlos Gruezo received a nice through ball from Antonio Valencia and took a shot that was nicely blocked by Brad Guzan. It was just about the only work the American keeper would have in the first half.

The same couldn’t be said of his Ecuadoran counterpart Alexander Domínguez.

After that early Ecuador chance, the United States played a strong first half, controlling possession and taking it to Ecuador’s defense. But the Americans couldn’t finish off chances, their final touch often letting them down.

But in the 22nd minute, the U.S. was able to convert when the Seattle Sounders’ very own Clint Dempsey scored in his home stadium to give the USMNT the early 1-0 lead. Bobby Wood drove down the right side of the pitch, beating his defender and serving Deuce a juicy cross that Dempsey headed past a diving Dominguez for a goal that electrified the pro-U.S. crowd.

In the 52nd minute, the controversy and wildness that would ensue for the rest of the match began.

Following a hard-fought battle down the right sideline, Ecuador’s Antonio Valencia swept the legs out from under USMNT midfielder Alejandro Bedoya. Jermaine Jones came to Bedoya’s defense, and as a mini-scuffle broke out, the match official would send off a pair of players.

Valencia was seen off thanks to a second yellow card, but Jones was shown a straight red for what appeared to be a closed-fist to the face of an Ecuador player during the scuffle. Both teams were down to 10 men and it set up a wild finish for the final 40 minutes of the match.

The game opened up quite a bit, with two key midfielders off and a massive hole in the middle for both teams. It was that space in the middle of the pitch that led to the United States getting their second goal. But this time, it was Dempsey doing the assisting. Dempsey touched down a headed ball from Gyasi Zardes, and connected with Zardes on the other end. Zardes only needed to tap it in to give the USMNT a commanding 2-0 lead.

It looked as if the U.S. would kill the game with that goal, but that only ignited Ecuador to play more offensively. It paid off in the 74th minute, when Michael Arroyo received a pass from Walter Ayoví off a free kick, to blaze one past Guzan and give Ecuador some hope.

Once again, the lack of that extra player in the middle of the pitch caused issues. This time it was the USMNT falling victim, as the free kick was simply passed to the top of the box and smashed home, without a hint of defense around Arroyo. The goal ended an over 300-minute shutout streak for Guzan in between the sticks.

From there, it was a frantic last 15 minutes for the United States, as Ecuador seemed to gain their second wind and went full offensive. Their best chance came when John Brooks, who has been golden for the U.S. so far, almost scored an own goal as he tried to clear away a ball in the box. Fortunately, Brad Guzan was there to prevent it from entering the back of the net.

After a last-ditch effort by Ecuador in the final four minutes of the game, it was too little too late as the USMNT held on to win and advance to the semifinals, where they will face the winner of Argentina-Venezuela on Saturday night.

There’s no doubt it was was a massive victory for the United States, but there are some big losses that come with it as well. Due to yellow card accumulation, they will lose Alejandro Bedoya — another one of their best performers so far — and Bobby Wood (not to mention Jermaine Jones because of the red card).

There is some good news: right back DeAndre Yedlin, suspended for the Ecuador match, will be available for the semifinal in Houston. If the U.S. does end up facing Argentina, his speed and defensive abilities will be needed against Messi and the rest of the consensus Copa America favorites