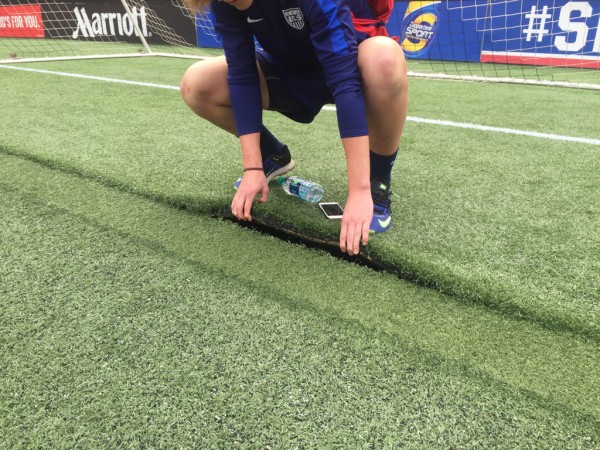 If you were hoping to watch the US Women’s National Team’s friendly on Sunday against Trinidad & Tobago, I’ve got some bad news for you – the match has been canceled. Why the cancellation on such short notice? Simple – the turf at Honolulu’s Aloha Stadium is a complete mess, and the USWNT and US Soccer don’t feel comfortable playing on the surface.

The field at Aloha Stadium appears. Dangerous enough to have apparently prompted #USWNT to say they will not play. pic.twitter.com/Yj7VTUDxuI

If you can remember back to before the Women’s World Cup this summer in Canada, many members of the various national teams participating (including the USWNT) raised concerns about the use of turf instead of natural grass in all of the stadia that the matches would be played in.

On Friday, USWNT midfielder Megan Rapinoe tore her ACL in training, and while no one has directly blamed the shoddy turf for her injury, the assumption there is strong.

But back to the turf for a minute. Here’s the official statement from US Soccer in regards to the cancellation.

CHICAGO (Dec. 5, 2015) – U.S. Soccer has cancelled the U.S. Women’s National Team Victory Tour match scheduled for Sunday, Dec. 6, at Aloha Stadium in Honolulu, Hawaii, after a determination that the artificial turf surface is not suitable to hold an international soccer match.

Upon testing the playing surface during the WNT’s training session earlier on Dec. 5, and after all possible options available were considered to get the field in a playable condition, the decision was made by U.S. Soccer to cancel the match.

“We extend our sincere apologies to those fans who were scheduled to attend the U.S. Women’s National Team match in Hawaii,” said U.S. Soccer spokesman Neil Buethe. “Player safety is our number one priority at all times and after a thorough inspection throughout the day, we determined it was in the best interest for both teams to not play the match. We regret not being able to play in front of our fantastic, loyal fans.”

Look at this turf from a picture tweeted out by Fox Soccer – seams, seams everywhere!

USWNT goalkeeper Hope Solo also tweeted out a picture of the awful turf.

Our loyal fans: Thanks for standing with us against unsafe field conditions & standing tall for #equal treatment pic.twitter.com/abn560Kitw

FS1 sideline reporter Jenny Taft also provided some more context for the cancellation, reporting that there were actually plastic pebbles mixed in with the rubber on the turf.

Confirmed w/ @ussoccer_wnt that match has been cancelled.Was told it came down to player safety, field was not up to international standards

After @ussoccer_wnt further examined the turf – I was told that small sharp plastic pieces (pebbles) were mixed in with the rubber. #uswnt

The USWNT has three more friendlies left this calendar year – one more with Trinidad & Tobago in San Antonio on Thursday, and two with China on December 13th (Glendale) and December 16th (New Orleans). After this embarrassment, there couldn’t be any more turf controversies…or could there be?