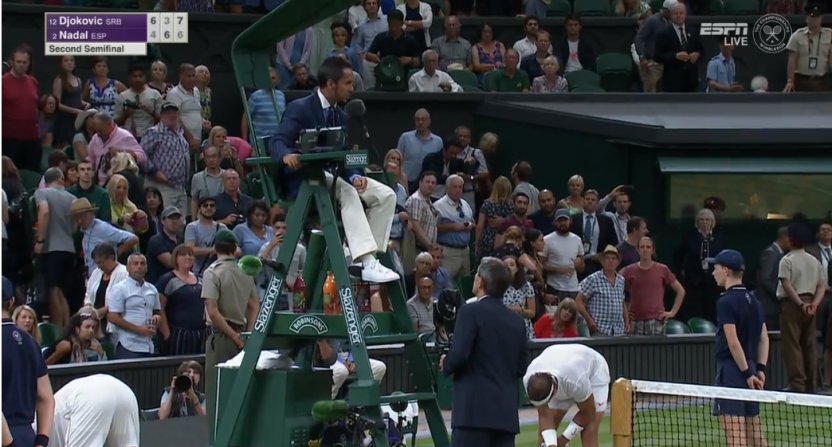 The men’s semifinals on Friday at Wimbledon were so wild that one of the matches won’t conclude until Saturday afternoon (or, Saturday morning in America).

The semifinal match between Rafael Nadal and Novak Djokovic was suspended after three sets due to the Wimbledon 11 PM curfew.

And within seconds, tournament referee Andrew Jarrett came out to announce that play would be suspended due to Wimbledon’s 11 PM curfew. The announcement was met with plenty of boos:

They could only get in three sets before the curfew because of how long and insane the semifinal between John Isner and Kevin Anderson was earlier in the day. After six hours and 36 minutes, Anderson beat Isner 7-6, 6-7, 6-7, 6-4, 26-24 to advance to the Wimbledon final. It was the second-longest match in Wimbledon history… behind only Isner’s 2010 Wimbledon first-round match against Nicolas Mahut that lasted 11 hours, five minutes.

And the Nadal-Djokjovic continuation on Saturday (1 PM local; 8 AM ET ) is likely to delay the women’s final between Serena Williams and Angelique Kerber, which was planned to start at 2 PM.

Novak Djokovic takes the third 7-6(9) over Nadal at 11:02 pm and play is suspended due to#Wimbledon curfew.

It will resume at 1 pm, which means it will almost certainly delay the 2 pm women's final, which is pretty damn annoying for a Slam (and unprecedented in recent years?)

So expect Saturday to be another drama-filled, crazy day at Wimbledon.