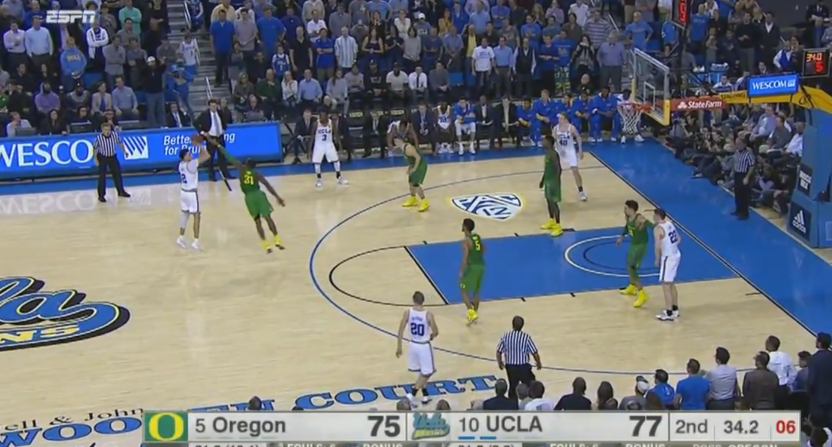 February in the college hoops calendar is like a warm-up for March. It brings us conference battles that separate the elite teams from the pretenders, and if we’re lucky, it also features high-profile matchups of exciting top-ranked teams.

On Thursday, we got two games as thrilling and well-played as any you’ll see in any month. No. 18 Duke upset No. 8 North Carolina in the sport’s greatest rivalry, then No. 10 UCLA came back to beat No. 5 Oregon in a huge Pac-12 clash.

And guess who’s back in the news.

America has been so obsessed with whom Grayson Allen has or hasn’t tripped this season that we’ve been distracted from the fact that he hasn’t been very good at basketball. His scoring average is down six points from last year, and his shooting percentage has dropped from 46.6 to 39.9. Not only has Allen been poorly behaved, he’s been mediocre on the court.

Not that Allen was the only Blue Devil who came to play. Freshman Jayson Tatum tallied all 19 of his points in the second half and also grabbed nine rebounds, while Luke Kennard added 20 points of his own. Duke has now won four straight after a January slide and once again looks like a title contender.

Thursday’s Duke-UNC rivalry game was significant for another reason. Entering Thursday, the two teams were both 48-48 in their last 96 meetings, with each having scored exactly 7,437 points. Not anymore.

During the first half Thursday night, Oregon led UCLA by 19 points. At halftime, the lead was nine. Five minutes into the second half, it was back to 15. What was supposed to be an intense battle of top-10 teams had turned into a one-side dunkathon.

But then the No. 10 Bruins stormed back, finally pulling ahead of the No. 5 Ducks with four minutes to play. UCLA held a two-point lead with just under a minute left when potential No. 1 overall draft pick Lonzo Ball did this:

Ball was the star of the game, finishing with 15 points on 6-11 shooting along with 11 rebounds, but it was a balanced effort for the Bruins. Seven UCLA players scored at least eight points, and the team shot over 50 percent on the night.

And we have to give some credit to one unheralded contributor on the sidelines: the UCLA mascot. Check this out:

I am SCREAMING at the UCLA Bruin dropping his shorts & smacking his ass at Oregon's FT shooter pic.twitter.com/tbbVlMBx9e

Sure Oregon’s Jordan Bell made the free throw despite being mascot-mooned, but we can assume the Ducks’ failure on the following possession, which sealed the win for UCLA, was due to residual intimidation from the gesture.

– Oh, and some falling cheerleaders…

– During the Washington-Colorado game, a Huskies player allegedly walked over an slapped a student who was taunting him.

– You’re going to want to see the highlights of this Wofford-Samford game. Yes, seriously.

– In NBA news, the Thunder beat the Cavs 118-109 as Russell Westbrook put up yet another triple-double. Ho-hum.

STATS! GET YOUR STATS! pic.twitter.com/qzszsBwjyr

– Jabari Parker is out for 12 months with a torn ACL, his second such injury, and it’s fair to wonder if his massive potential will end up wasted.

– Gerald Green is 31 years old and averaging only five points a game, but he can still get way, way up.

– The NBA is launching a new 2k league, bringing the sports world and the esports world a little closer together. Anyone else remember Madden Nation?

– The fallout from Thursday’s Charles Oakley-James Dolan showdown at Madison Square Garden continued into Friday, and there’s no mistaking whose side LeBron James is on.

LeBron makes a statement, ends post game session, then tells reporters as they disperse: "Oh, I'm sorry. I missed one. Oakley for president"

– Carson Palmer is returning to the Arizona Cardinals. As with Carson Palmer’s career generally, that’s exciting, but not that exciting.

– The Miami Marlins might be sold to Ivanka Trump’s father-in-law Charles Kushner. They also might not be sold at all.

– Former Rangers and Angels pitcher C.J. Wilson has retired and now owns a luxury car dealership in Fresno. Alrighty then.

– It’s been this kind of season for the Dallas Stars.

–  The woman who was punched by Oklahoma running back Joe Mixon says the incident began with Mixon making unwanted sexual advances.

– Speaking of sexual misconduct on a college campus, three Michigan State football players and an assistant coach have been suspended over sexual assault allegations.

– On a lighter note, McDonald’s will now sell crab sandwiches in the Bay Area. We don’t know why either.