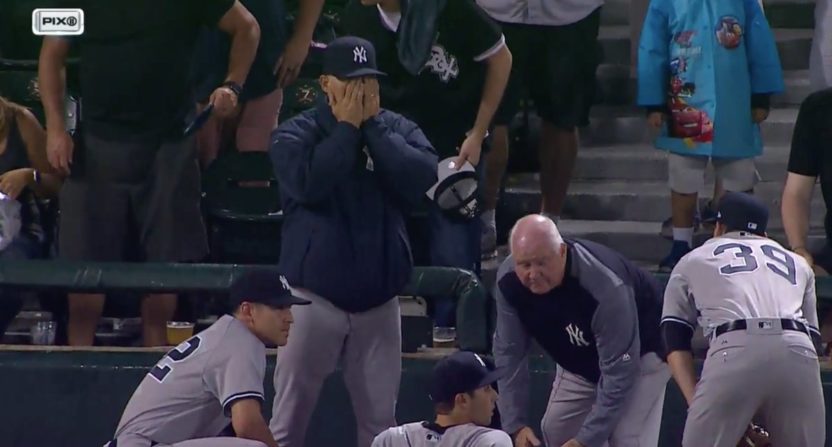 Baseball injuries are just the worst, and we unfortunately had two severe ones last night, to two very promising young players. That’s a downer way to start a Friday leading into what might be a long holiday weekend, but hey, it’s only getting better from here, right?

First, Trea Turner went down with a fractured wrist

This happened as the Nationals took on the Cubs, a game Washington would eventually blow late. But more than the game, the bigger loss for Washington was young shortstop stud Trea Turner, who took a Pedro Strop fastball off the right wrist, resulting in a fracture:

Turner could be back in a few months, at least, which is probably more than we can expect for the other young player who went down injured last night.

This is so, so hard to watch. Ranked as a consensus top prospect in the Yankees system, Fowler was making his major league debut last night in Chicago when he went all out for a foul ball down the right field line. There’s not much room there. The result was about as bad as it could have been:

Just a heartbreaking scene for the #Yankees Dustin Fowler, who had to leave the game due to injury in his @MLB debut. pic.twitter.com/dal7DOAukN

Damn it. That’s a ruptured patellar tendon. The kind of injury that results in pictures like this one, which was what I immediately thought of, from when former Indiana guard Maurice Creek suffered the same injury:

What an unfortunate thing.

From Wednesday, we wrote about umpire John Tumpane, who physically and verbally helped prevent a woman from committing suicide in Pittsburgh on his way to the park. On Thursday, the crowd and both teams gave Tumpane the standing ovation he clearly deserved:

-We’re in a bit of a dead season, sports-wise, but along with baseball and the NBA free agency/trade market, there’s also some international soccer, routinely one of the most entertaining parts of any summer.

Good heavens, that’s a firecracker. This was yet another knockout round defeat in a FIFA tournament for Mexico, and as Leander notes at Yahoo, that’s becoming an unfortunate trend for Mexico:

Mexico has never won a knockout game in either of the two global soccer tournaments put on by FIFA, the World Cup and the Confederations Cup, when that tournament was not staged on its home soil.

El Tri won its only World Cup round of 16 game in 1986, when it hosted. And it managed to win the 1999 Confederations Cup when it came to Mexico, claiming a semifinal victory over the United States in extra-time, and then outlasting Brazil 4-3 in a slugfest final. When Mexico put on the World Cup in 1970, it stumbled in the quarterfinal, which was the first knockout game then.

Mexico manager Juan Carlos Osorio has an absurd record since his first match in charge in November of 2015, having managed 29 matches while suffering just 3 defeats, only two in competitive games. Unfortunately, one of those was the loss yesterday, and the other was a 7-0 shellacking at the hands of Chile during last summer’s Copa America. Germany and Chile are both top-class teams, of course, and it would seem absurd to boot Osorio; that would basically be admitting that in order to keep your job as manager of Mexico, you essentially can’t lose, ever, to anyone.

Still, it’s Mexico, who have burned through 11 managers over the past 10 years. (Including, hilariously in retrospect, Sven-Goran Eriksson.) It’s not a place for stability, but considering all the good work he’s done, and how dangerous Mexico has looked under his leadership (including looking like a much better squad overall despite a 1-1 draw with the United States earlier this month), that would be a pretty foolish decision to make. Osorio deserves to lead the squad through the World Cup, barring further meltdown.

-Hey, they’re making another movie that takes place in the Jumanji Cinematic Universe, which isn’t actually a thing but might as well be, apparently. It has the Rock, and Kevin Hart. It does not look great, to me, but your mileage may vary, so here’s the trailer:

-A ref in Brazil pulled a gun on a player. (Reading the story, though, it almost sounds justified!)

-So, John Calipari may or may not be angling to lead the Knicks basketball operations, along with coaching the team.

-A professional golfer’s mom waded into a water hazard to retrieve a putter he chucked in.

-What should the San Francisco Giants do? A rebuild could be the right call, but they probably don’t have the stomach for that.

-Ty Duffy wrote a great piece over at Awful Announcing on the likely future of the online media industry. It’s…not uplifting.

-What’s been the biggest disappointment of this year’s baseball season so far? Our staff offers plenty of options, though my choice would have just been the Cubs. But, as a Cubs fan, I honestly don’t care that much. It’s hard to. The last thing I want to do is become the Boston fans who immediately sounded entitled as hell after winning multiple titles.

Ducks are excited about lunch

What the hell’s in that container?