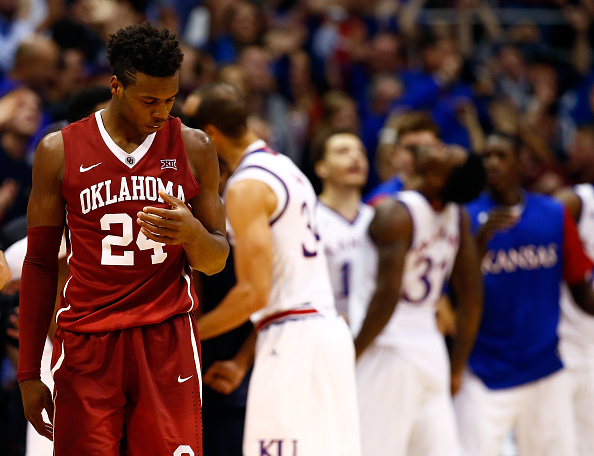 Oklahoma and Kansas played an all-timer in college hoops, Black Monday came in the NFL, and a blind gamer beat The Legend of Zelda: Ocarina of Time. It’s the Tuesday Cheat Sheet…

Oklahoma-Kansas hoops lived up to the hype, and then some

On Monday night at Allen Fieldhouse, the two teams met up, and the game most definitely reflected their poll rankings.

Kansas came away with a 109-106 win in an instant classic that took three overtimes to decide. It was an absolutely awesome game to watch, and will be pretty much impossible to top over the rest of the college basketball season.

Kansas was able to come away with the win, despite an INSANE 46-point performance by Oklahoma star guard Buddy Hield.

Buddy Hield scored 46 for Oklahoma, matching the most by a player in a game this season (A.J. English, Iona) pic.twitter.com/gpvWNW8nD8 — ESPN Stats & Info (@ESPNStatsInfo) January 5, 2016

Buddy Hield’s 46 pts: Most vs a top-5 team in the last 20 yrs … tied for the most EVER by an opponent in Lawrence. pic.twitter.com/uQZf0q2cjo

This is the Buddy Hield game. No matter what happens. Epic, once in a lifetime moment. He’ll have it forever. — John Buccigross (@Buccigross) January 5, 2016

And yep, these Big 12 teams will meet again soon:

There would seem to be a decent chance we see them meet up again in late March/early April too.

With the NFL regular season ending on Sunday, it was inevitable that there would be some head coaches and front office members leaving organizations come (Black) Monday. It wasn’t too crazy this time around actually, and part of that had to of course do with some moves being announced before Monday (Chip Kelly/the Eagles the most notable one).

We’re actually going to start with one of those ones that happened technically before Monday, as it was late Sunday night, and we didn’t include it in yesterday’s Cheat Sheet: the San Francisco 49ers fired Jim Tomsula, after he coached just one season there. And after they drove a great coach in Jim Harbaugh out last season. Harbaugh didn’t hesitate on Sunday night to indirectly respond on Twitter to the events.

Joe Fortenbaugh wrote a terrific article on how to re-brand the 49ers.

Then in one that isn’t exactly surprising given his age (69) and three straight losing seasons, but is still weird to think about given his career accomplishments with the organization: Tom Coughlin resigned as head coach of the New York Giants.

Tom Coughlin out as @Giants head coach via @AdamSchefter A look at his accomplishments: pic.twitter.com/K676nIUEat

But there was one big stunner: Chuck Pagano signed a four-year extension with the Indianapolis Colts.

Why was this such a stunner? Reports on New Year’s Eve were that Pagano would not be retained as the Colts’ head coach unless the Colts made the playoffs, which they did not. Pagano is a VERY happy man that the Colts chose to not just keep him, but give him an extension.

Pagano: “This is absolutely the best day of my life.”

– In your HOLY CRAP news of the day: A blind gamer beat ‘The Legend of Zelda: Ocarina of Time’ after five years of trying:

Would a blind gamer be able to complete a complex game like The Legend of Zelda: Ocarina of Time, despite never having played it under “normal” conditions? Well, blind gamer Terry Garrett did exactly that, beating Ocarina of Time after almost five years of persistence. Garrett’s sense of hearing got him through the game, as he relied on Ocarina of Time‘s stereo sound effects to guide him through the environment. He also researched the game in exacting detail and solicited tips from YouTube followers before embarking on each section of his long quest.

If you’ve played the game (god I hope you have because it’s arguably the best ever), you know it’s hard enough to beat regardless, but if you’re blind? I don’t even know what to say. Remember how hard the Water Temple was, for example? Imagine getting through that level like this:

– The ESPN 30 for 30 down the road on Johnny Manziel is going to have to be a 10-part series. The latest in Johnny’s crazy life: He apparently partied in Vegas with a fake wig and mustache.

– Everyone wants to be in Los Angeles: the Chargers, Raiders, and Rams have all filed for relocation to LA.

– Everything you need to know about the NFL playoffs.

– Can the Broncos win a championship with Peyton Manning?

– NFL’s extra point rule change was a success in its first year.

29 steps in six jumps. This girl would dominate the NFL Combine.