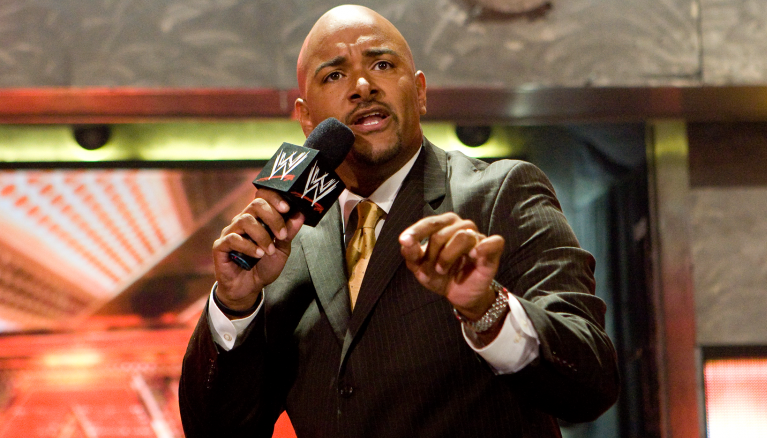 WWE and ESPN were always an awkward fit, a conflict brought to light by the most recent column from ESPN public editor Jim Brady. That unease was probably best embodied by anchor Jonathan Coachman, who left WWE 10 years ago to join ESPN as an anchor and hosted weekly segments about pro wrestling on SportsCenter.

Having left ESPN in November, Coachman was in search of a new gig. Earlier in January, he announced that he was joining the Golf Channel to call play-by-play for the network’s World Long Drive events. Though Coachman was excited about the position, calling it “a bucket list job,” being the voice of World Long Drive wasn’t exactly what media observers had envisioned for him as his next stop. But it appears that wasn’t the only gig Coachman was working on.

On Monday, WWE announced that Coachman is returning to the company, signing on to be a part of the Raw broadcast team. Coachman will replace Booker T on the show’s three-man broadcast crew, joining announcer Michael Cole and analyst Corey Graves. He’ll start immediately, joining Monday’s Raw telecast (Jan. 29), which follows Sunday night’s Royal Rumble pay-per-view event. (Former UFC fighter Ronda Rousey appeared at the end of the show to reveal that she was joining WWE as a full-time wrestler.)

Booker T, meanwhile, will return to being a panelist on WWE’s Kickoff broadcasts before pay-per-view events, in addition to making appearances on Raw and representing the company as a WWE ambassador.

I thought Coach was pretty good as an announcer. Much better as a pure heel, but Graves is heelish too, so will be interesting to see how it goes. Coach starts on #Raw tonight.

Coachman originally joined WWE in 1999 as an interviewer, eventually expanding his role to commentator. (He was also a sideline reporter for regional telecasts of the XFL during that league’s only season in 2001. Will he return to such a role now that the XFL is relaunching?) He continued as a commentator, but developed into more of an on-air character and even served as Smackdown interim general manager before leaving in 2008 to take a job with ESPN.

As mentioned, Coachman hosted a weekly segment about WWE, titled “Off the Top Rope,” which often included interviews with WWE stars. However, the network eventually phased the segment out and Coachman saw his role diminish at ESPN.

Frustrated with his shrinking on-air role and not being able to follow through on several ideas he pitched to producers and executives (such as covering combat sports), Coachman left ESPN last November and began doing a daily show on Periscope. At the time, he hinted at new gigs to come — including attempts at podcasts that were turned down — but nothing seemingly developed for him.

Coachman commented on going back to WWE shortly after the move was announced.

World’s collide. Anything is possible. When you do the right things and believe in each other you can do great things. This has been my vision for years and today it finally happened. WWE Universe I am privileged to be back. And it feels amazing to come back home. Philly tonight. https://t.co/ZkOqrmUlMB

Returning to WWE may have been the inevitable move and the door was opened when Coachman appeared on last week’s Raw 25th anniversary show. Obviously, bigger things were in the works and that was only a hint at what was to come.