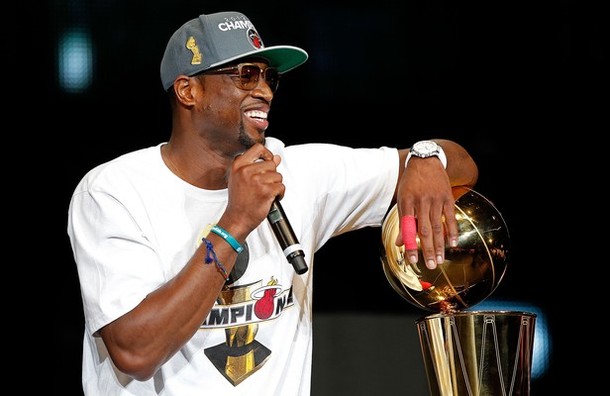 The core of the reigning champion Miami Heat's formation is one of the most hated stories in the NBA. First Dwyane Wade announced he was staying in Miami and Chris Bosh, sitting right next to Wade, announced he would be joining the Heat.  Simple enough.  The next night LeBron James did the Decision and everyone wanted to catapult boulders at the American Airlines Arena.  But what if that had never happened?  While most people assume this was Wade, Bosh and James' plan all along, Wade joined Chicago Tribune Live last week and said  a meeting with the Chicago Bulls almost changed everything.

"I'm a Chicago guy and I grew up idolizing the Chicago Bulls, idolizing Michael Jordan and wanted to wear that jersey. So the day I went for the Chicago visit and they gave me the No. 3 jersey, I mean, that day messed me up. I went back home and I had the jersey on and, I mean, I turned into a kid again."

First off, Wade could've been pandering to the Chicago media.  It's entirely possible and no one would blame him for doing it.  It's also entirely possible that Wade liked the idea of returning home and playing with the team he grew up watching and sharing the ball with a guy like Derrick Rose.  Plus Joakim Noah is probably way less annoying if you're playing with him.