When Andrew Bynum took a shot at the fans in Philadelphia on Thursday, you kind of expected the flippant comments knowing how his tenure went and ending with the Sixers. But when Bynum talks about where his overall game is and how much longer he will play in the NBA, he is somewhere stuck between optimistic and reaching for the past.

Bynum did not log time for Philadelphia last season because of knee injuries and admits to contemplating retirement while not being able to slide or jump right now.

Still, the 26-year old plans to be out there when the Cleveland Cavaliers take on the Sixers on Friday.

Will he finish with a double-double against his old team?

Apparently, Bynum believes he can still be that kind of player. 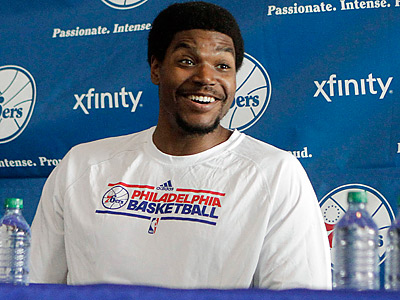 While Bynum admits to being “a shell of myself on the court right now” as he battles both mental with physical limitations, no once can accuse him of being short on confidence.

“I just want to be able to play without pain and discover the joy again. I feel like I can still be a double-double guy in this league,” said Bynum on Thursday.

Sadly enough, because of those questionable knees it is easy to also question Bynum’s ability to achieve that kind of goal — being a double-double guy that is.

What may be equally as painful as his achy knees, is having to sooth any ego issues where Bynum views himself as an all-star kind of player who can reach double figures in scoring and on the glass on both ends of the floor. This season, Bynum is averaging 5.5 points and 3.5 rebounds (12.8 minutes in 4 games played) and it was just two seasons ago with the Los Angeles Lakers that Bynum was that double-double guy he says he can still be: Contrast that with the 18.7 points and 11.8 rebounds. That is the guy who achieved All-Star status during his injury-free days, when he helped the Lakers win two NBA championships and was an All-Star selection.

But now having to admit to himself that he is no longer that kind of player could be the toughest call to make.

So what will the future hold for Andrew Bynum: early retirement or putting up double-doubles for the Cavs?