After losing to the Utah Jazz at the Toyota Center on Wednesday night, the Houston Rockets knew that on Friday night, they had to beat the Eastern conference’s second-best team in to retain the eighth and final playoff spot in the Western Conference.

Coming into Friday’s game against the Toronto Raptors, Houston was riding a three-game losing streak, which culminated in that last-second loss to the Jazz. In that game — at home — the Rockets held an 85-82 lead with about a minute to go, but a game tying three-pointer from Shelvin Mack and a wide-open Derrick Favors layup with 1.6 seconds left put the Rockets’ playoff hopes in doubt. Moreover, since Houston had already defeated Toronto a few weeks ago, the Raptors were out for revenge. Could the Rockets overcome a stumble against a sub-.500 opponent and take down one of the upper-tier teams in the league? 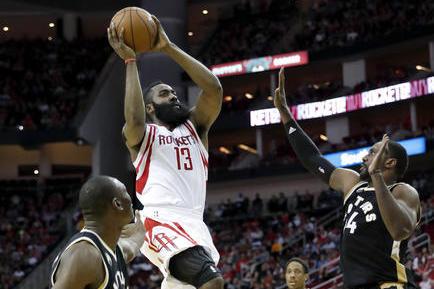 Wednesday night against Utah, James Harden — last year’s runner-up in the MVP race — had a solid game with 26 points, 10 assists and eight steals. However, he missed a game-winning three at the buzzer; his 26 points weren’t enough.

Friday against the Raptors, Harden left nothing to chance. He knew he couldn’t.

The Beard turned in an amazing performance, posting a triple-double consisting of 32 points, 13 assists, and 11 rebounds, leading Houston to a 112-109 win. He was efficient from the field (50 percent) and attacked Toronto’s defense from all angles. On the season, Harden is shooting 43.3 percent from the field and a career-high 86.8 percent from the free throw line.

Harden can sometimes turn the ball into a black hole, but Friday, he struck the essential balance the Rockets always need from him: he scored when he needed to and found his teammates for better shots when he didn’t have an opening himself.

Harden’s unselfishness helped take the scoring load exclusively off his back, which always makes the Rockets harder to deal with as a group. Patrick Beverley scored 17 points, while shooting 5-of-7 from three-point range. One of Beverley’s three-pointers came off a Harden assist. Harden was the conductor leading the orchestra, as Houston played beautiful basketball in a must-win game.

Ugly wins are better than pretty losses, but pretty wins trump everything. Pretty wins in the crunch-time portion of a long NBA season? Only playoff wins are more memorable.

Harden’s willingness to pass was contagious against Toronto. The entire team got into the act. Every time the Rockets got on a fast break, the basketball constantly swung around the perimeter, hitting the open player. Houston as a team had 25 assists on the night. If the Rockets do that more often, then they could be a force to be reckoned with down the stretch.

Despite Friday night’s victory, Houston cannot savor this win too much, especially since this is a team which tumbles as soon as the afterglow of a specific triumph recedes into memory. The team that has now swept Toronto in the season series and won in both Boston and Portland since the All-Star break is the same team which has lost to Utah at home and gotten shredded by Milwaukee on the road.

Coming up, the Rockets face a key stretch of games to end the month of March. The Rockets will visit the Indiana Pacers on Sunday evening and then the Cleveland Cavaliers on Tuesday. Neither of those games will be easy: Indiana is fighting for its playoff life in the Eastern Conference, and the Cavs need no explanation.

After those two road games, the Rockets come back to the Toyota Center to take on the disappointing Chicago Bulls team before starting April against the Oklahoma City Thunder. Houston must go 2-1 in its next three games to keep a hold on the eighth seed with the Jazz lurking.

The Jazz’s next three games are against the Timberwolves, Lakers and Warriors. Utah is highly likely to gain two victories in that three-game stretch.

Back to the Rockets’ specific needs, beyond the twists and turns of the schedule:

Houston needs Harden to play how he did on Friday night for the Rockets to have a good chance at the playoffs. He is the straw that stirs the proverbial drink. If he is on, the Rockets will be in a good spot.

It is compelling to see the Rockets fight for a playoff spot after the firing of head coach Kevin McHale earlier in the season, not to mention the failed experiment with Ty Lawson. Things were going downhill for the Rockets and it was possible that they could have blown the team up at the trade deadline. However, this veteran group led by Harden is showing the resilience that’s needed to stay in the hunt heading into the month of April.

The Rockets often make themselves look very bad… which is why Friday’s win over Toronto magnifies their seemingly endless capacity to bounce back, just when their world seems ready to collapse on them.

Jovan is the founder and editor at Total Sports Live. He is also a 2014 graduate of La Salle University with a Bachelor of Arts in Communication.