You know it when you see it.

Yet, counterintuitively, greatness transcends its most obvious manifestations. It is in the nature of greatness to transcend.

Such is the reality of the Golden State Warriors on Tuesday morning after their Game 7 survival act against the Oklahoma City Thunder in a memorable Western Conference Finals.

It’s not just that the Warriors overcame a 3-1 deficit against a team with Kevin Durant and Russell Westbrook.

It’s not just that the Warriors became the tenth team in NBA history to pull off the 3-1 comeback, only the third to do so in the conference finals round.

No, what truly defines the Warriors’ greatness is that a team which made the sport of basketball look so absurdly easy at times — the embodiment of a new NBA aesthetic at its greatest height — encountered such pronounced difficulty, and managed to fight its way to the finish line.

The Warriors are an example of a “pretty team,” a champion which thrives on its ability to make hard shots look easy, almost effortless. “Pretty teams” absolutely destroy opponents when everything’s going exactly as planned. “Pretty teams” sell lots of tickets and create the best highlight reels. “Pretty teams” are what most sports fans want their own teams to be.

The limitation attached to “pretty teams,” though — this has been true throughout the history of sport itself — is that when they get punched in the mouth by a more physical and focused opponent, it’s no longer easy to make pretty plays and pretty shots. When a pretty team gets roughed up and thoroughly outplayed, it must produce a response defined not by the artistic brushstrokes or the penchant for technique-based brilliance which carried it through a long season, but by a champion’s heart.

All of us are fans of sports. Those who write or talk about sports were fans before we moved into a blogger’s chair or a commentator’s booth. Among the community of fans, most gravitate to the pretty team (or in golf or tennis, the solo athlete) who can make the most amazing plays. If artistry didn’t have a large place in sports, in capturing the imagination and expanding our sense of possibility, this theater of human activity wouldn’t mean very much. Artistry is a big reason why we watch these games every night.

For three of the first four games in the Western Conference Finals, the Oklahoma City Thunder did a virtually perfect job of getting in the way of the not-so-peaceful Warriors. Kevin Durant played defense at a level we hadn’t seen before. Russell Westbrook bothered the living daylights out of Stephen Curry. Draymond Green and the non-Klay Thompson Warriors were flatly rattled.

The pretty team took a series of uppercuts to the face and went down in the ninth round of this 15-round heavyweight fight. 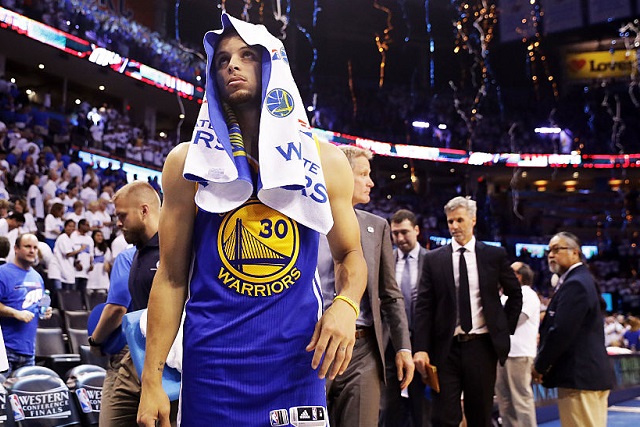 OKLAHOMA CITY, OK – MAY 22: Stephen Curry #30 of the Golden State Warriors reacts to their 133 to 105 loss against the Oklahoma City Thunder in game three of the Western Conference Finals during the 2016 NBA Playoffs at Chesapeake Energy Arena on May 22, 2016 in Oklahoma City, Oklahoma. (Photo by Ronald Martinez/Getty Images)

So often, the pretty team or player wilts in the face of a tougher opponent’s onslaught.

Peyton Manning loses against the Patriots’ defense in January.

Roger Federer gets worn down by Rafael Nadal on clay at the French Open.

The skill and talent of the Washington Capitals get blunted in the rough-and-tumble world of the NHL playoffs.

The people who make a given sport look the most beautiful are unable to perform the way they want to, because an opponent is rugged and resourceful enough to play defense in a way which proves to be supremely bothersome.

In the face of such opposition, the plays which flowed so effortlessly against lesser adversaries must emerge as the product of far more will and intentionality. Bullied, bewildered and ego-bruised, the pretty team has to find an iron will to overcome determined defense.

It is a cliched statement, but cliches are cliches because they’re true: The Golden State Warriors looked deep inside themselves after Game 4, and in the latter stages of Game 6, and found more resilience than ever before — more resilience than they displayed in Game 4 of the Finals last year in Cleveland. 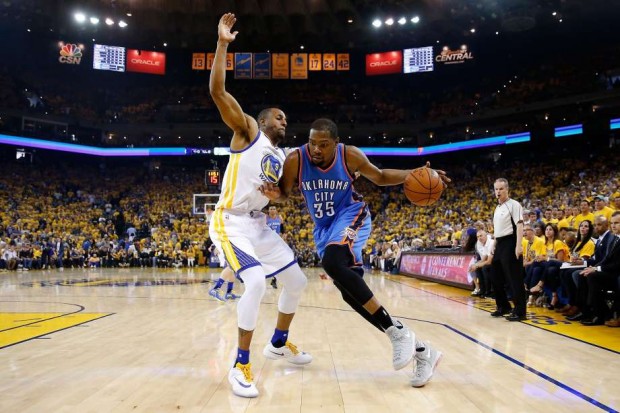 Yes, the Warriors made many “pretty plays” in Games 6 and 7, chiefly the tsunami of three-pointers Klay Thompson and Steph Curry hit. Yet, the rest of the Golden State roster had to continue to fight on the glass, trusting that its persistence would be able to fend off Steven Adams and Durant and Westbrook and an Oklahoma City team whose effort through Game 4 was off the charts.

Without an increase in determination; without Andre Iguodala’s improved late-game defense on Durant in Game 6; without Andrew Bogut’s Game 5 minutes and Harrison Barnes’s 8 rebounds in Game 7; without Steph Curry’s steals at the end of Game 5 or Draymond Green’s steals at the end of Game 6; without so many of the effort plays which had been missing in the first four games of the series, Golden State wouldn’t be where it is on the last day of May, blessed with a chance to face the Cleveland Cavaliers for the NBA title.

The 2016 Golden State Warriors were always a fun team, but a 73-9 club — even with an injured Steph Curry — went 8-2 in its first two playoff rounds. We never had the chance to see this team taste its own blood until Oklahoma City played the best defense seen anywhere in the NBA this season.

We all waited to see how this team, which had never coasted but had so regularly existed a cut above the competition over six and a half months, would respond to a moment of genuine crisis.

We have our answer.

Late in another Game 7 — not the one seen Monday night in Oracle Arena — the great Brent Musburger paused for a few seconds before uttering an immortal line about the nearly-ended duel between Larry Bird of the Boston Celtics and Dominique Wilkins of the Atlanta Hawks. After Bird hit a dagger layup to seal the Celtics’ win over the Hawks in Game 7 of the 1988 East semifinals, Musburger spoke simply and powerfully in a sequence which begins at 9:25:

“You are watching what greatness is all about.”

We watched the Golden State Warriors display the full measure of their greatness over the past five days, Thursday through Monday.

The pretty team found the iron will. The aesthetic exemplar found the heart of a lion.

This was Peyton Manning against the Patriots in 2007.

This was Federer digging out of big deficits in three separate matches to win the 2009 French Open.

The pretty team found a way to be gritty as well.

Now, the Golden State Warriors stand four wins away from validating themselves as one of the greatest NBA teams which has ever existed.

You are watching what greatness is all about.