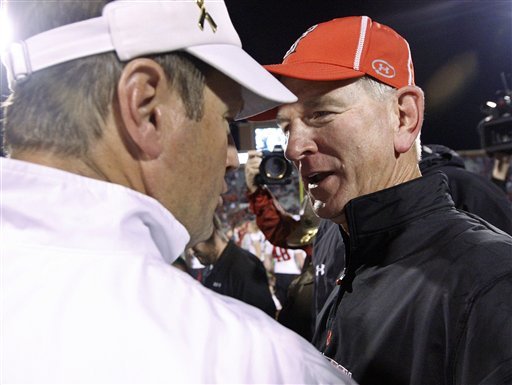 In this edition of “Meeting Of The Minds,” CBR’s writers tackle the question of college football’s scariest underdog coach.

Allen Kenney: Texas Tech pulled off a stunning upset of Oklahoma this weekend thanks in large part to a brilliantly crafted game plan from coach Tommy Tuberville and his staff. Tubs faded into the background on the college football landscape a bit after parting ways with Auburn and being hired on by Tech – strangely, Lubbock, Texas, isn’t exactly a media hotbed. However, this weekend served as a reminder of just how good of a coach he truly is.

I’m not sure if Tubs necessarily qualifies to be a part of this group, but there are some crafty coaches out there who just seem to know how to stage an an upset. Maybe they’re great motivators or maybe they just know how to put together a strategy to exploit the tiny cracks in an opponent that their peers don’t see. One guy who comes to mind from the past is Lou Holtz, M.D., who pulled off big upsets when he was at Notre Dame over powerhouses like Miami and Florida State.

Who are some of the pesky coaches of today who have a knack for pulling off an upset or surprising an overconfident opponent?

Kevin McGuire: Can we put Mark Dantonio in this conversation too? It seems as though the man is good for an upset or a surprising win every season since he has become a head coach, and the way he has come up with some huge wins in East Lansing the past couple of years has been nothing short of amazing.

I’ll give you that his record against top 25 opponents is very underwhelming, but the man seems to have a knack for putting together a plan that puts his team in a good position to win the past couple of years, as seen in this weekend’s win against Wisconsin (never panicked) and his recent success against Michigan and Notre Dame. And don’t forget about the win against Wisconsin last season and the win at Penn State was possible because of a perfect game plan to exploit Penn State’s weaknesses.

Matt Yoder: Mark Dantonio is my man as well.

Let’s face it, Michigan State is far from the most talented team in the nation. We saw that when they were railroaded by Alabama in the Citrus Bowl last year. (I can still call it the Citrus Bowl, right?) However, Dantonio finds some way to win these games like we saw against Wisconsin on Saturday that he should have no chance of winning. He’s a poor man’s Les Miles of the Midwest.

For Sparty to be ranked ninth in the country this year after a remarkable year in 2010 is nothing short of improbable. Dantonio gets more out of his team than arguably any coach in the country. In fact, if Ohio State decides to part ways with Luke Fickell, the first call I would make is to East Lansing.

Michael Felder: I want to say Dantonio but he’s been hammered out here by my colleagues. In looking around there are so many new coaches in new spots that it is tough to gauge their “upset-ability.”

I’d like to go with Mike Riley from Oregon State, independent of his woeful team this season. The Beavers and Corvallis have been a house of horrors for teams who seemed destined for greatness out of the Pac-10 in years past. Riley has got his boys up to beat Oregon and USC in recent years, effectively crushing their hopes of climbing in the BCS ranks.

In the coaching profession he’s a name that is respected by those in the circle and his teams play hard for him. They show up and when they are in Corvallis, the mist is going, the crowd is rocking and Riley’s teams show up and pull out big games.

This year not included.

Aaron Torres: Ok, so as Mike said, with so many new coaches in so many new places, it’s pretty hard to gauge the guys who are truly threats to pull consistently pull an upset. Even when a guy has success doing that at lower levels, they usually get gobbled up by bigger programs.

So for the sake of not being redundant, I’m going to take this conversation in a different direction, and instead of asking “which coach can pull upsets,” I’ll say “which coach is best at continually getting guys to play to their full capabilities (which in turn, may produce an upset). For that, I’ll say Gene Chizik.

Yes, yes, I know what you’re thinking: Aaron, I know you’ve been under the weather, but lay off the cough syrup. You’re delirious.” And I promise, I’ll stop drinking it soon. I will.

But those were once in a generation guys, and if anything, I think this year is a better indicator of Chizik’s true coaching ability. Yes he’s had ugly losses to Arkansas, LSU and Clemson, but look at those three teams again; they’re a combined 23-1. And oh, all three of those games were on the road too.

Against everyone else though? Auburn has wins over Mississippi State, South Carolina and Florida, none of which I expected them to get.

Which brings me back to Chizik. Yes Auburn has looked bad at times this year, but those three losses were to three of the elite teams in the sport. No one expected Auburn to get those wins (except maybe Clemson). But when the talent is equal, it always seems like Chizik’s teams are getting the “W.”

To me that speaks volumes to what kind of coach and motivator he is.

Does he fit the criteria of this specific question? Not necessarily. But does he get more out of his players than people expect (which in essence is what makes an upset?)? That he does.

Tom Perry: Hey, where’s Ron Zook? Shouldn’t he be in this conversation?

I’m going with Washington’s Steve Sarkisian. I know, his team was just beat up by Stanford, but Sarkisian orchestrated two upsets of USC and he did it with leftovers playing with Jake Locker. He also guided the Huskies to an upset over No. 19 Cal in his first season.

As Sarkisian amasses more talent he should orchestrate other upsets, but his teams won’t be the underdog very often in the future.

Aaron Torres: I think Sark is the best answer yet. The fact that he got that grease fire of a Washington team to five wins in his first year, and a bowl game last year, despite the Pac-10 having one of its strongest years in a long time really does speak volumes to how good Sarkisian is.

Like Tom said, the fun part is what happens when some of his own recruits get older and experienced. I could see a scenario where (after Andrew Luck leaves this year) they’re Oregon’s biggest rival in the entire conference going forward.

Allen Kenney: Looking back at his career, I’m on board with Mike’s pick of Mike Riley. That 2008 USC team Oregon State knocked off was loaded, and Riley was mainly working with spare parts. That’s just one in a string of WTF wins he has had out there in the middle of nowhere.

Supposedly, Riley’s on the hot seat in Corvallis. It would be a huge mistake for the Beavers to can him, but if so, I think his agent’s phone will be ringing off the hook.