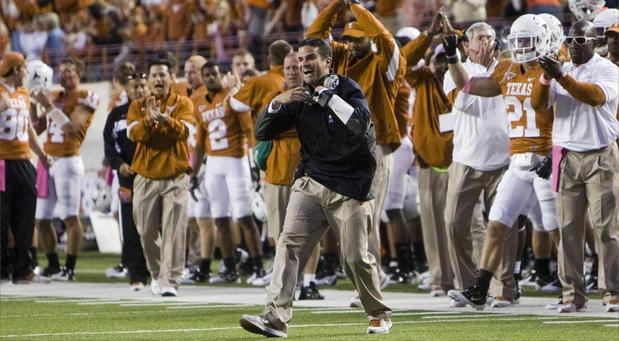 Well kiddies, it’s almost the end of Big XII week here at Crystal Ball Run, and it wouldn’t be complete if we didn’t talk about the team everyone loves to hate: The Texas Longhorns.

Ask many opposing fans, and that cash-printing, TV-network-owning, Texas A&M-push-out-the-dooring (ok, that last one is a stretch, both factually and in pun terminology) juggernaut down in Austin got a lot of what they deserved in 2011, with a second straight semi-disappointing season. Despite overhauling their staff and promising changes across the board, Texas was still a very un-Texas like 8-5 last year, putting their two year total since Colt McCoy left town in 2009 at just 13-12 overall. Should the Longhorns have another year like that in 2012, it might be time for Mack Brown to start pricing out condos in Del Boca Vista.

Fortunately for Brown though (and unfortunately for South Florida realtors), if you look closely at things in Austin, you’ll see that this team and program are on the upswing, and if you look really closely you’ll see that with a few breaks, the Longhorns could actually be in the thick of the Big XII title race this year. Will they win the conference outright? Probably not. But at least they’re in the discussion, a place they haven’t been the last few years.

Of course before to get there, there the Longhorns still do have a number of things to address. In no particular order, here is what Texas needs to go right to have success in 2012.

Will the running backs stay healthy?

Whenever discussion of Texas’ offense pops up, it always begins with the quarterback. Is David Ash the starter? What’s up with Case McCoy? How is Garrett Gilbert handling his exile to Conference USA? You know, stuff like that.

However, what most people don’t realize is just how important the running backs are to what Texas is going to do in 2012, and more importantly how close they are to being a really dynamic team in the running game. But for that to happen, they need to stay healthy.

Why is that? Well, it’s because when Texas had their two best running backs on the field last year, both proved to be more than capable runners. Malcolm Brown entered the season as a highly rated recruit, blew up against Oklahoma State (135 yards), followed it up with a nice game against Kansas (119 yards)… then hurt his foot and wasn’t the same the rest of the year. In the six games that followed Kansas, Brown had a total of 109 yards. Yikes. Same with Joe Bergeron who went for 136 against Kansas (apparently even I could’ve gone for over 100 yards that day), 191 versus Texas Tech… and then got hurt and had 49 the rest of the year. Had either (or both) stayed relatively healthy, could that have been an extra win or two in Texas’ favor?

And all that doesn’t even factor in the guy who might have the most pure talent on the roster, in true freshman Jonathan Gray. Gray finished with an unconscionable 10,908 yards and 205 touchdowns in his high school career, and was widely regarded as not only one of the best backs in the country last year, but one of the best ever in the state of Texas. And as you might’ve heard, they’ve produced some good ones through the years.

Point being, this team has a chance to be really, really explosive next year in the running game. But they’ve got to keep their starters on the field.

Can Texas get through the early portion of their Big XII schedule?

To be blunt, Texas’ schedule is nothing, if not manageable. They get three layups to start the year (the only semi-challenging game will be at Ole Miss, a team that simply doesn’t have the talent to keep up for four quarters with the Longhorns) and outside of a trip to Kansas State the last day of the season, don’t play a road game against a team anywhere close to elite. Oklahoma State could provide a challenge September 29, but the Pokes are a long way from where they were last year as well.

Meaning that what it all could come down to is a three game stretch starting with Oklahoma State game, through West Virginia’s visit to Austin and followed up by the annual showdown with Oklahoma in Dallas. Go 3-0 there and you’re in the driver’s seat in the Big XII. Go 2-1 (which seems realistic) and you’re in the discussion. Go 0-3, and again, Mack Brown may be looking for a retirement house on the beach somewhere.

Frankly, we’ve already made the case that Texas should be able to handle Oklahoma State, especially given that there’s a bye week between the trip to Ole Miss and the follow-up affair in Stillwater. And frankly, they should be able to handle West Virginia too. This will be the Mountaineers first big challenge in the Big XII, and Texas has the bodies in the secondary to slow down the passing attack of Geno Smith and Co. If not stop them completely.

Which means that it all could come down to the Red River Shootout (yes, I still call it the “Shootout,” political correctness be damned!) and a visit to Dallas to take on Oklahoma. And for the first time in a long time, I think the Horns have a chance.

Will they be favored? Not unless Landry Jones comes down with some strange strand of influenza between now and then. But again, it’s not about being favored as much as not getting the doors blown off like last year. And with Jones’ receiving corps decimated by suspension and the defense working for under new defensive coordinator Mike Stoops, there’s real reason to believe the Sooners will be a step behind the eight-ball from where they were last year. I’m not saying the Longhorns are going to win, but I’m not saying it won’t be close, either.

So there you have it. All the pieces are place for Texas, but for it to happen they’ve got to get through that tough three game stretch at the end of September. Do that, and they could be playing for all the Tostitos and the Fiesta Bowl come January.

What about the linebackers?

Simply put, Emmanuel Acho and Kennan Robinson have been benchmarks of this defense dating back all the way to the run to the BCS title game back in 2010. Both were seniors, both were leaders, and they finished 1-2 in tackles in Austin last year.

But for those who think the Texas defense will drop off precipitously without them, well, think again.

First off, there’s some guy named Manny Diaz back to run this defense, a guy who is one big year (and maybe one big day from Robert Griffin III last year) from being a head coach in the immediate future. The man knows football and the players run through walls for him, as evidenced by Texas’ 11th ranked total defense last year. And again, that was after RGIII took a match and lit this defense on fire last year. Take that one game out, and the Longhorns would’ve been Top 10 nationally. Not bad for a first year coordinator.

But really, what it comes down to is the personnel returning in Austin. Jordan Hicks was a high school All-American and showed his vast potential last year, finishing sixth on the team in total tackles. Look for him to take a big step up in 2012. Also, don’t sleep on Steve Edmond, a 6’3 260 lb. monster, who not only scares small children, but opposing offenses as well. Demarco Cobbs will fill the void in the last spot.

Simply put, this linebacking corps will be fine, and so too will this defense. If you’re looking for reasons to nitpick the Longhorns in the fall, you’ll have to look somewhere else.

Will the quarterbacks finally be “good enough?”:

Notice how I didn’t say “good” here? Nope, the simple truth is that whoever wins this spot (almost certainly David Ash) doesn’t have to be good; they just have to make sure not to be terrible. The running game and defense will take care of the rest.

And frankly, I do in fact think that Ash will be much improved from last year. Remember, this was a kid who was buried on the depth chart last fall camp, and literally didn’t work with the first-team offense until days before camp started. How much do you think the 157 passes he threw last year, plus the extra 15 practices he got in February and March are going to help him entering 2012?

We’re going to find out.

But one thing is for sure: If the quarterback play is there, watch out. The Longhorns could be a real contender this year.