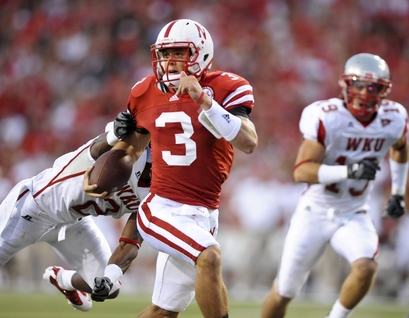 Prepare to see the unthinkable in Lincoln as not only will the Badgers be wearing alternative uniforms, but the Huskers will take to the field in black helmets and scarlet from neck to foot. There’s also a football game taking place, allegedly.

Last year, Wisconsin welcomed Nebraska into the Big Ten by crushing the Cornhuskers’ hopes with a 48-17 dismantling under the lights. This year, the scene flip flops, is branded “The Quick and the Red” and features two teams still trying to find their identities.

With Nebraska stubbing their toe against UCLA and Wisconsin looking outright bad even when winning, some might be quick to point to this game as the Huskers’ chance for a 31-point victory of their own. Don’t let a 73-3 victory over Idaho State fool you. The Badgers can still exploit very weak areas in Nebraska’s defense on their way to what would have to be classified as an upset in more ways than one.

For Nebraska to Win: On offense, the Huskers have to find a way to neutralize Wisconsin’s linebackers. Chris Borland and Mike Taylor are more than capable of disrupting Tim Beck’s offense, so Nebraska must wear them out.

Look for multiple screens, reverses, short passes and other reasons to get the Badger ‘backer duo putting in work early. Should that happen, watch for a heavy dose of the Huskers’ running game and playaction passes in the red zone.

When on defense, regardless of whether Montee Ball plays or how much, Nebraska needs to contain the Wisconsin run game, a far more difficult task than it sounds. Since switching to their current defensive alignment (closer to a modified nickel than a true 3-4), Bo Pelini’s defense has allowed only 179 rushing yards, but again, that was against Arkansas State and Idaho State.

Look for Nebraska to load up and dare Wisconsin quarterback Joel Stave to beat their secondary with his arm. The man who can assist with that is the same one that had a field day against the Huskers last year, senior wide receiver Jared Abbrederis. If he’s kept in check and Wisky’s running game is left spinning its wheels, the home team should prevail.

For Wisconsin to Win: On offense, attacking the interior defensive line is a must. Youth and lack of depth gives the Badgers a perfect opportunity to cause panic early with some long runs up the gut.

If Wisconsin has success on the ground despite a swarm of Huskers still blowing assignments and arm-tackling like they were in Pasadena, the Badgers can start targeting Abbrederis. Look for playaction as Wisky tries to work some less-heralded receivers into the mix before a heave downfield.

On defense, the Badgers need only remember what they did to stop Nebraska – Get in Taylor Martinez’s head. With the Husker offensive line still an imperfect unit, messing up Martinez’s rhythm early is vital. However, he isn’t as mentally fragile as he was one year ago. If he gets confidence with some short-range throws or tosses a deep score, he settles in far quicker.

If Martinez can be taken out of the equation, the Badgers won’t be able to completely stop Rex Burkhead, but they’ll only need to slow him down to win.

Key Player, Nebraska:  Rex Burkhead, as if there was any doubt – The Huskers likely had a far better chance to knock off UCLA if he wasn’t sidelined due to a knee injury. He played with a brace last week against Idaho State and still tore off a career-long run for the second time this year. He finished the day with 119 yards on only eight carries.

To put his value in perspective, if Martinez goes down, Burkhead is the Huskers’ next best option at quarterback if they don’t want to burn a redshirt.

Key Player, Wisconsin: Montee Ball/James White – Assign this to whoever plays most, if at all. The Wisconsin run game is crucial to beating Nebraska. If it gets stuffed, the Badgers can’t rely on Stave and Abbrederis to get the job done. Receivers Jacob Peterson and Jeff Duckworth will probably get some balls thrown their way early in an attempt to throw the Huskers off.

Key Stat: 94 – This is the difference between Nebraska’s national ranking in scoring offense (No. 8) and Wisconsin’s (No. 102). While each team has lost once, the Cornhuskers put 30 points on the board in their loss. The Badgers mustered only seven.