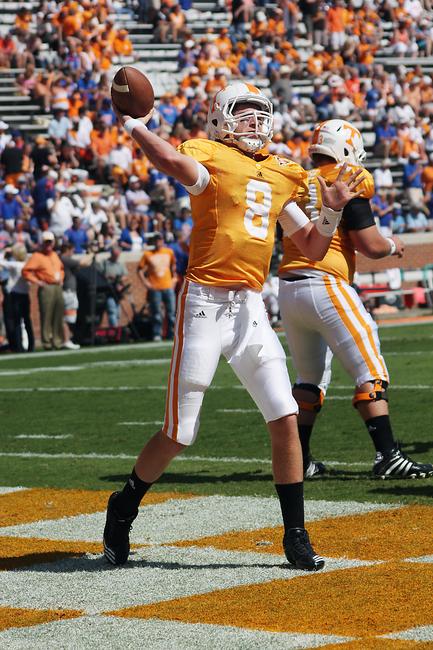 Life in the SEC as a head football coach is not a job that guarantee’s job security. That’s especially the case for a program like Tennessee, where they ousted Phillip Fulmer after 16 years of stability and a 152-52 record at the school because they seemed to just simply get old of him.

Now in his 3rd season with the Volunteers, Dooley now is on the verge of moving the fan base and boosters past the optimism phase and into the “what have you done for me lately (NOW)” phase. And for a team with just four seniors slated to be starters on offense and defense combined, it may not be an easy task for Dooley to get past the losing record ways. But one player alone can do that for him. And that man, Tyler Bray, will likely have Derek Dooley’s and a future NFL GM’s career on the line, expecting greatness.

A three year starter at high school who, in his senior year led his team to a perfect record with 41 touchdown passes, Bray was a three spot athlete. Dominating at quarterback, he also averaged 20 points and 8 rebounds as a junior on the basketball team while batting .445 with a homerun and 20 RBIs as a baseball player. That natural athleticism, however, only caught the eye of two BCS teams: Louisville and Tennessee.

After early enrolling in December, Bray was ready to hit the ground running as a quarterback for Derek Dooley, and when he finally got his starting chance, against Memphis on November 6th, Bray began to flash his outstanding natural ability. He went on to win his first four games as a Tennessee starter, winning SEC Freshman of the Week in three of those games.

As a sophomore, expectations were much higher for Bray around the program. After a bumpy year one, it seemed Derek Dooley had a grasp on the potential for his team, lead by the 6’6, athletic and raw quarterback who rattled off a 4-1 record to end his true freshman season.

And to start the 2011 season, things went as planned, only better. Bray’s big time NFL arm, tightly spun ball, and composed throwing style allowed him to have almost 700 yards, 7 touchdowns, zero interceptions, and a 78.4 completion percentage through his first two games. Despite those games being against an FCS foe (Montana) and a mediocre Big East team (Cincinnati), there was reason for excitement for the Volunteers.

Even through a tough loss at Florida , not an unexpected loss for the team, where he threw 3 touchdowns and nearly 300 yards, Bray bounced back with another 4 touchdown performance against Buffalo. It’s the ability to clear his head, game to game, series to series, play to play that allows him to be consistent without being based entirely on rhythm.

As when the Georgia game approached, at Tennessee, things were encouraging despite playing against a talented Bulldog defense. After a solid first three quarters of 251 yards, Tennessee fans (and Derek Dooley) faced a crushing blow with the injury to Bray to his right thumb.

Without Bray, the offense tanked, averaging 174 passing yards per game and having a total of one touchdown and six interceptions in the next five games.  Bray returned to action to beat Vanderbilt despite getting his cast removed just 12 days prior to the game. The loss at Kentucky in the final game of the season sealed the season on a 5-7 season that would leave the Volunteers bowl-less and Derek Dooley and Tennessee fans wondering “what if”.

Few quarterbacks in college football and in the NFL can completely shape a team’s success. The ones that sometimes do thank it to the system they play in (Texas Tech) or the talent they play with (Oklahoma). Bray will get the chance to seize both of those opportunities to go along with his natural abilities.

With Justin Hunter (who was lost on the first series last season) returns with Da’Rick Rogers opposite him. Both juniors, they may have a lot riding on the play and health of Tyler Bray this season, as they also are considered possible first round talents if all goes well this season.

Only a true junior, Tyler Bray is far from a finished product as a passer. His footwork could be more decisive and crisp. He struggles to maintain consistent touch in short and mid routes and can over-throw balls at times. He has a great feel for his release and his natural ability, but he needs to feel pressure more consistently and feel more confident to move in the pocket, something he flashes but doesn’t always follow through with.

Still, as with past high ceiling, elite talent passers like Andrew Luck, Matt Stafford, and Sam Bradford, it’s much easier to rave about what he may be able to do with his loaded skill set than his limitations. Bray’s cannon arm, room to bulk up his size (something he needs to do), and subtle and not-often used athleticism can all be polished to make him a complete pocket passer.

With the talent around him, the confidence he has in the system, and the elite skill set he has as a quarterback, Tyler Bray should battle for the 1st overall pick in the NFL Draft in either 2013 or 2014. He has THAT type of ceiling as a passer.

Derek Dooley may need to hope that breakout campaign that puts him in the early declaring talk is this year, or else is may cost Dooley his job. But if Bray maximizes his ability, can stay healthy, and has the type of 2012 season he’s surely capable of, he’ll likely make Derek Dooley and an NFL head coach a very happy man before early 2013 is through.