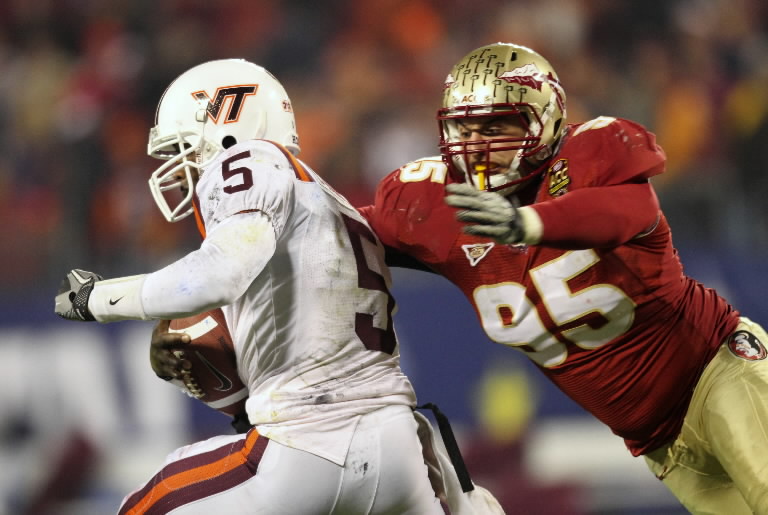 Soccer may be the world’s biggest sport right now, but the American love for OUR “football” is spreading overseas at a rate many Americans aren’t aware of. There isn’t quite a global presence of football yet to the point where NFL teams are scouting outside of the US, but that day may not be too far off.

In the 2009 draft, the New England Patriots selected German born Sebastian Vollmer in the second round, considered a surprise pick for two reasons. One, he was a very raw, former tight end that was still learning the game despite being dominant at times at Houston. And two, he had only been playing football in American for four years.

While Vollmer may be the poster child for a German-born football player moving to the NFL, another German born lineman may be yet another catalyst for a global football presence in the NFL: Florida State defensive end Bjoern Werner.

Werner didn’t play in Germany through high school the way Vollmer did, but he was an exchange student that only had a chance to play two years of high school football. His mauling style and natural strength quickly made him a highly coveted recruit, and by his sophomore year at Florida State (last season), he became a starter on a Top 10 team in college football.

Florida State’s sack leader from last year, Brandon Jenkins, gets much of the attention on the defense, and deservingly so. Jenkins is an explosive, quick twitch, and great counter speed rusher that looks to be an ideal fit in a 3-4 scheme as an outside linebacker or in a role that Dwight Freeney/Robert Mathis thrived in with the old Colts defensive system.

However, Jenkins is lucky to have the powerful rush end complement Werner on his team. And he should be thankful, as Werner could have a major impact in keeping Jenkins productive and a possible 1st rounder in next April’s draft.

At 6’4 and around 270 (and getting bigger), Werner has some of the most natural and devastating power of any defensive linemen in college football. Few players in the country  have the upper and lower body force he provides, but it’s rare to see such a raw talent use that strength so well.

Werner is able to stay low off the snap and quickly direct his weight and force to the shoulder of his blocker to win leverage battles immediately. He keeps his hands inside and drive to gain initial separation to set up his rush very well. His initial burst, balance in his first rush, and force with his hands through his arms allows him to drive back tackles in pass blocking and force a second blocker in run situations.

He holds the point of attack tremulously well, not over-extending himself in which he’d lose balance or lose inside hand positioning. While he has the closing speed to finish plays on the inside or through in inside gaps to finish tackles at or behind the line of scrimmage, he’s developed vision to seek out the design of the play and not get over-anxious to leave his gap responsibility. While he still can leave his gap open or misread the play, his development over the course of last year was impressive.

That devastating power showed up in some of the most important games last year, especially against Oklahoma where he was a consistent force in the run game and in giving Landry Jones headaches. However, Werner is still far from a polished rusher. That’s the scary part for opposing teams next season.

His raw strength and power rush has developed thus far in his career, but that won’t be enough in the NFL. Offensive tackles with ideal length and balance will be able to drive him inside and onto the ground if he lacks a counter rush. He hasn’t shown much of the ability to cross the face of his opposing blocker, but flashes the ability to do so thanks to his separation away from his blocker. Also, he lacks quick change of direction for speed rushes, and doesn’t show the ability to bend at the edge and get on the outside in his pass rush pursuit.

As of now, Werner is  a bit one-dimensional as a pass rusher at the defensive end spot. The good news for him is that he may be one of the most in-game powerful rushers since Haloti Ngata at Oregon. If Werner can continue to use his natural strength to consistently hold the point of attack and drive blockers back, he’ll have no problem generating NFL interest in the future at either a strong side 4-3 defensive end or a 5-technique in the 3-4. And if he can develop a speed and counter rush, the sky is the limit for how teams may want to use Werner in the NFL.

He and Brandon Jenkins could form an exciting duo in college football this year at Florida State. The two of them complement each other as well as any defensive end duo in the country, and that should make Florida State one of the most feared teams to opposing offenses this year. But while Jenkins already has the NFL interest, Werner is just starting to get onto the national spotlight.