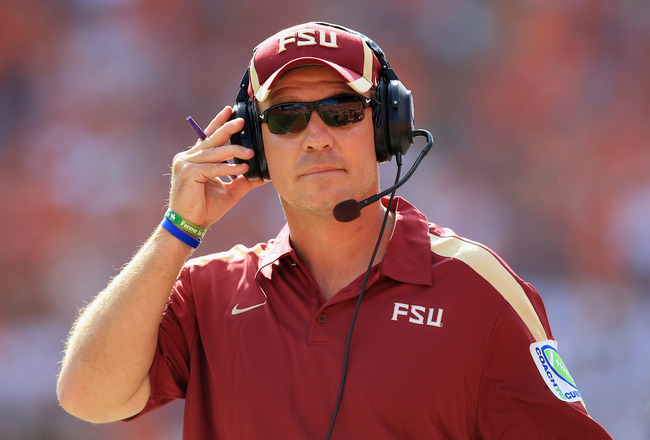 In the sport of college football, unfortunately, too often we hear about the “numbers crunch.” How scholarships can come and go, and be taken away by a head coach at the drop of the hat. Sometimes it's to make way for a better player, sometimes it’s because a college coach has decided a high school recruit isn’t worthy, and sometimes, well, we never get an answer. But it always seems to be the kid who suffers, and never the school.

Thankfully though, every once in a while, we see a positive story, one where it’s clear that a coach does understand the weight and value of a college scholarship brings and acts accordingly.

Today is one of those days, and that coach is Florida State’s Jimbo Fisher.

That’s right, as the Seminoles get set for the biggest game of their season, one of their biggest recruits, 285 lbs. offensive tackle Ricky Klepal was hit with some big news earlier this month: The Florida State commit out of Plant High School in Tampa would be forced to quit football after receiving his fifth concussion. If he elected to continue to play, any head trauma could’ve killed him on the spot.

That’s tough news for any kid, but especially one who might’ve been relying on a scholarship from Florida State to pay for his higher education.

Luckily, Fisher took that concern out of Klepal’s hands earlier this week, when he called the young player’s high school coach and told them that a scholarship would be waiting for him at Florida State. The kid will never step on the field at Florida State, but he will be on full scholarship.

"I just got a call from coach Weiner from coach Fisher that they are going to honor my scholarship, which is a huge weight off my shoulders," Klepal told NoleNation.com’s Corey Dowlar earlier this week. "That makes me happy."

Now obviously, there could be some ancillary things in play here. As my colleague Michael Felder pointed out to me, Klepal’s high school (Plant in Tampa) is a powerhouse that routinely a number of players to the highest levels of college football annually. Giving away one scholarship might be worth it for Fisher to get in the good graces of the people around that program. And as my fellow colleague Allen Kenney pointed out, this is hardly the first time something like this has happened; at Oklahoma a tight end recruit named Laith Harlow was awarded a scholarship in a similar manner earlier this spring.

Still, whatever the reason was, this is an absolute class move by Fisher. While it is pretty obvious that this is the “right” move, it doesn’t necessarily mean it’s one that every college football coach would take. Not with the cost of winning so high, not with scholarships so valuable and not in September, with five months until Signing Day. In the same way that kids aren’t bound to anything when they make a verbal commitment at this time of year, neither are coaches, with nothing going official until the first Wednesday in February.

Only for one Florida State recruit, it did.

Let’s hope on a weekend where Fisher will coach the biggest game of his life, his selflessness isn’t overlooked either.