Based on the trailers, ads and other promotions for the movie, Get On Up looked like it was going to make the big mistake many failed biopics do. In recent years, filmmakers tackling biographies have learned that it’s better to focus on a specific period of the subject’s life, rather than try to fit an entire life story into a two-hour narrative.

At first, it appears that director Tate Taylor and screenwriters Jez and John-Henry Butterworth have figured out how to do the life-spanning biopic for James Brown without having to create a story structure for it.

The film begins in 1988 with Brown’s best days behind him, barging in with a shotgun on an insurance seminar being held in a building he owns because someone used the bathroom that adjoins his office. This eventually leads to Brown being arrested after a car chase with police that went from Georgia to South Carolina and back, something that’s shown later in the film.

I think the intention is to use this incident as a framing device for the story. It appears that Brown is going to tell his life story to one of the people attending the insurance seminar — the woman who dared “hang a No. 2,” as he put it — now cowering in terror from this crazy man with a shotgun. But that’s just abandoned later in the story, cutting later on to the car chase. 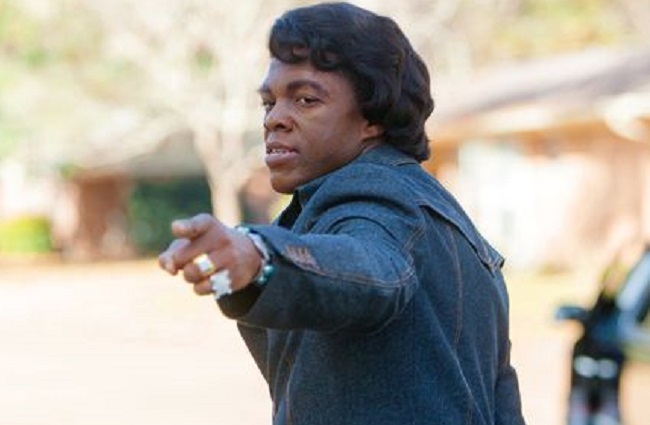 This calls into question why the scene was even used because it doesn’t lead to anything, nor really serves any purpose other than to show how eccentric Brown was in his later years and that he favored velour track suits. Showing Brown in jail, reflecting on his past life or telling his story to a fellow inmate, could have also been used as a framing device, had Taylor been interested.

Brown was 55 years old at the time of this incident, meaning that actor Chadwick Boseman has to suffer through another mistake that several biopics make: Hiding actors underneath layers of prosthetics and make-up to make them look old. While Boseman might resemble the real-life Brown a bit more with the make-up on, it clearly limits his range of expression. That’s made much more apparent throughout the film when you see the rest of Boseman’s performance.

Boseman already showed a gift for portraying people with exceptional physical gifts when he played Jackie Robinson in 42. I would guess that depicting Robinson’s batting, fielding and baserunning skills believably was more difficult than imitating Brown’s famous dance moves on stage. But more people seeing Get On Up have probably seen Brown perform, so there’s an eye test that Boseman has to pass. He has to live up to the memory and myth of Brown.

The good news is that Boseman does so. He carries the film, just as it asks him to. It’s just too bad that the star doesn’t have a better movie here to showcase his skills.

Boseman conveys Brown’s forceful personality and titanic ego, along with the latent pain of being abandoned as a child by his parents and the deep insecurity that creates. At various points early on, Brown breaks the fourth wall and talks to the audience, which suits Boseman’s charisma well. But the problem with using that device is that when it’s abandoned later (when Brown could further explain his behavior), it becomes apparent that the gimmick was used to cover up some narrative flaw. It’s telling, instead of showing. 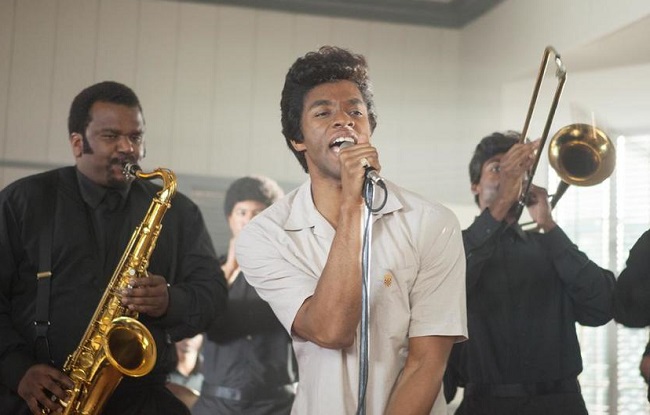 There’s also frequently a mischievous glint in Boseman’s eyes that says Brown is a lot smarter than people might believe. One scene in particular shows Brown’s street-smart business savvy, seeing money to be made by circumventing a system that screwed artists out of money for years.

The movie could have used more of that insight. We see very little about what made Brown such a musical innovator. We don’t see him composing any of his famous hits (the man is in the Songwriting Hall of Fame), nor any hint of how he created his famous sound. (In one amusing scene, a white reporter asks him what “the groove” is, spoken in perfect whitebread affectation.)

Maybe Brown really did just feel the funk and couldn’t explain it, even to his band — other than to tyrannically dictate how they should be playing (making for one of the movie’s more memorable sequences). But it leaves a sense of something missing from the story. If Jersey Boys could show some of the songwriting process, why can’t Get On Up? Is it just all about Brown’s force of personality? Apparently so.

To its credit, the movie shows that Brown was hardly an inspirational or heroic figure. (As he says to the audience at one point, “Do as I say, not as I do.”) The script includes ugly incidents such as Brown beating his wife (though the story makes it seem as if he was only married once, as opposed to three times) and mistreated his band by not paying them for weeks while fining them for showing up late or messing up on recordings. Glossing over those would have invited some justifiable criticism.

Ultimately, however, Get On Up really does try to shoehorn too much into its two-hour, 18-minute running time. The gimmick of bouncing between different periods of Brown’s life (going back too often to Brown as a young boy) might allow the filmmakers to cover as much as possible, but structurally, it’s a mess. There’s no point or direction to the storytelling jumps. Fortunately, the movie can always lean on the music — and Boseman.

One last note about Boseman: After starring in two biopics, I worry that he’s in danger of being pigeonholed if he doesn’t find the right project. (Playing Vontae Mack in Draft Day isn’t what I mean.) It’s almost a surprise that Jamie Foxx is playing Mike Tyson, instead of Boseman.

There have been rumors that Boseman will eventually play Marvel Comics character Black Panther, either in an Avengers film or a stand-alone project. For his sake, I hope that becomes true. We need to see even more from this guy.