Love Actually. There is an ongoing joke with some of my friends about how I’m so obsessed with this movie that I’ll watch it year-round, even though it’s clearly a holiday movie that is only watchable from the day after Thanksgiving until New Year’s or some such asinine rule that I never follow. (Sorry, Courtney, if I want to watch Love Actually in July, I’m going to do it!)

Sadly, not everyone shares my love for this movie.

Similar to what I did on my blog, I will be doing this in a point, counter-point fashion — or as I like to call it, “Bitch, please!”

Point: […] it was confirmed to me that a considerable number of people not only consider Love Actually a classic, but go so far as to watch the movie annually as a holiday tradition. Which is—and please believe that I am being as diplomatic as I can—utterly insane.

Point: I think it offers up at least three disturbing lessons about love. First, that love is overwhelmingly a product of physical attraction and requires virtually no verbal communication or intellectual/emotional affinity of any kind. Second, that the principal barrier to consummating a relationship is mustering the nerve to say “I love you”—preferably with some grand gesture—and that once you manage that, you’re basically on the fast track to nuptial bliss. And third, that any actual obstacle to romantic fulfillment, however surmountable, is not worth the effort it would require to overcome.

Bitch, please: First — yea, yeah Colin Firth and his chickadee don’t speak the same language. That doesn’t mean it was “love to hop on the bang bang choo choo train” at first sight. They communicated with their EYES, okay?? And she jumps into a gross pond to save his shitty book, how could that NOT win him over?

Furthermore, Natalie and Hugh Grant discuss her ex-boyfriend’s mistreatment of her. Grant still wants to be with her even after she talks about her tree trunk thighs. That’s communication! AND you make this point about grand gestures and such and how that’s the only way to get what you want, such as everlasting love, except HELLO Keira Knightley/Andrew Lincoln plot line, specifically, because he tells her he loves her in a grand gesture, and where does it get him?? NOWHERE!!

Finally — the last part about overcoming obstacles to be with someone and this talk of Laura Linney and Mr. Washboard Abs not trying to give it another go after their first attempt is thwarted by her institutionalized brother. Sure, they could have tried again, but the big picture (at least the one I’m looking at) is that her brother will always come first, not just on that one night. Better to realize it now, as painful as it is, than say 10-15 years into their marriage when Karl is tired of coming in second and starts banging his skanky assistant like Alan Rickman almost did.

Actually, that’s another debate I have with friends. Was it just a necklace he gave her, or did he deliver the necklace, have a row, and then leave? But I digress. Maybe it was worth the risk to one of them but not the other. Why do you have to be so black and white??? THINGS HAPPEN, SIR.

Point: In the author’s original review of the movie, he wrote that, “The primary hindrance to romantic fulfillment is merely the fear of declaring one’s love. As soon as the characters in the film find the courage to say ‘I love you,”‘ their romantic journeys are essentially over and they go straight to the happily-ever-afters.”

Bitch, please: False, false, false. Exhibit A: We OPEN the damn movie with Firth telling his skank-a-doodle-doo that he loves her (three or four TIMES in the span of a minute and she’s all, hair toss, whateves, and I basically want to punch her in the mouth but that’s fine) — declares his love, gets cheated on. Exhibit B: Andrew Lincoln— declares his love, ends the movie right where he started— third-wheeling it into eternity. Exhibit C: Well, okay fine — I can’t think of a third example, but I don’t need to because my first two are so solid. What is so wrong with impulsive grand gestures, anyway? When Colin Firth proposes to you in Portuguese, YOU SAY YES!!! 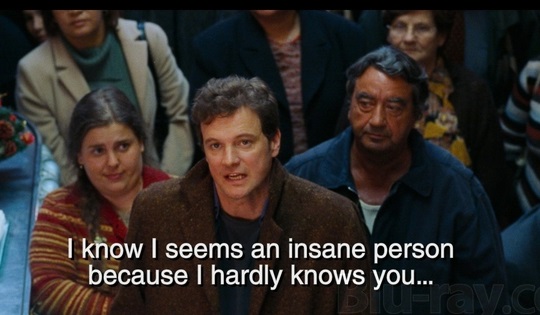 Point: After pining interminably for Santoro, Linney finally gets her big opportunity after an office party, luring him back to her apartment to have sex. (Again, the idea that they might actually talk first—perhaps over a glass of wine?—is foreign to the movie’s whole conception of how love progresses.)

Bitch, please: Did you SEE how nervous she was when he drove her home? Luring is not the right word. Luring is what Mia does with her devil horns and inability to cross her legs. Linney is seizing an opportunity she’s been waiting on for two years, three months — blah blah, I can’t remember the exact amount of time but it is in the 27 month-range — and you expect her to be like let’s TALK first?

I don’t think the movie uses this plot line to underscore their bang-first-talk-later idea of love; it’s using this situation to detail complications and that shit happens. There are so many people in this movie not getting laid, if I may remind you, such as Andrew Lincoln, which is a goddamn tragedy.

Point: The fundamental problem with Love Actually is that it presents romance as either absurdly easy—something that strikes you like a thunderclap and requires only a single grand gesture in order to be fulfilled—or all but impossible. Notably absent is the idea that love might ever be worth a little sustained effort: some mutual exploration and discovery, a bit of care and nurture, maybe even the overcoming of an obstacle or two.

Bitch, please: Hugh Grant and Martine McCutcheon overcome an obstacle called Billy Bob Thornton feeling her up! Keira Knightley and Andrew Lincoln overcome the fact that he’s in love with her to remain friends and not let it affect either of their relationships with her husband. Colin Firth overcomes the sting of his girlfriend cheating on him with his BROTHER in order to love again, which by the way you don’t even touch on — a seemingly legitimate relationship that wasn’t. Just because it’s fast doesn’t mean it isn’t real.

Love Actually does enjoy its grand gestures. And I appreciate that. In real life, we’re so afraid of getting hurt that we never show our cards and sit around and wait, hoping the OTHER person will make a move. What is so goddamn wrong with making a grand declaration of love, even if it doesn’t seem logical or might not last? Sometimes the most stable-looking relationships are the faultiest. We could all use a little impulse in our lives, actually.

Reva is a staff writer for Awful Announcing and the AP Party. She lives in Orange County and roots for zero California teams.