I didn’t make it out to theaters last weekend to see It Follows, but still ended up watching a pretty spooky movie at home. Going Clear, Alex Gibney’s HBO documentary on Scientology isn’t an outright horror film, but the story he tells of the church is a rather creepy one.

To establish where I’m coming from on this, I have conflicted feelings about organized religion and faith. So I carried that into Going Clear. But I really do feel like Gibney presents the facts as best he can, based largely on the testimony of former members of the Church of Scientology such as Paul Haggis, the director and screenwriter who was the subject of Lawrence Wright’s 2011 investigative feature for The New Yorker. Wright expanded that article into the book upon which Gibney’s film is based.

If Gibney (and Wright before him) only had Haggis’ recounting to go on, there probably wouldn’t be enough for a feature-length documentary. However, he utilizes several former members of the church, including two people who held high positions in the instituition’s hierarchy.

Marty Rathbun was essentially the right-hand man of Scientology leader David Miscavige, the best at conducting the “audits” that members undergo as they join and progress through the religion’s various stages. Mike Rinder was a chief spokesperson and executive, often appearing on television to defend the organization and combat any media daring to ask tough, investigative questions. Both eventually left after becoming disillusioned with Miscavige’s leadership, along with learning of blackmailing and physical abuses (some of which takes place at a Guantanamo Bay-like prison camp) perpetrated on members who expressed doubts or spoke out against the church.

Interviews with people like Haggis, Rathbun and Rinder are a large part of what makes Going Clear so compelling. You just want to yell at your TV, “What were you people thinking?” How could they not see what was happening? How could they not question the psychological bullying taking place in the auditing sessions? How did their rational mind not kick in when people claimed to gain extraordinary or supernatural abilities, thanks to Scientology? 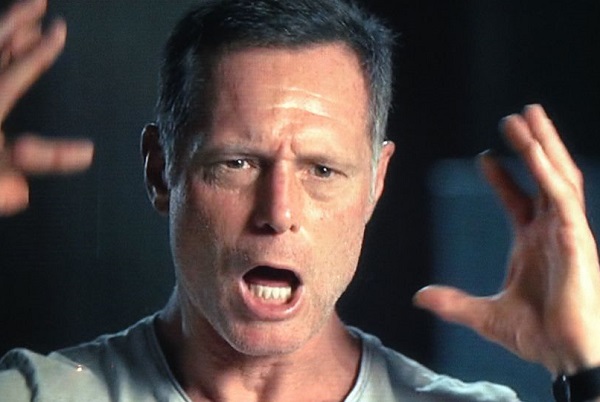 Yet the first part of the film does explore what drew those people to the church and its philosophies. And it speaks to the power that religion and faith hold in our global culture. Those people were looking for answers. They wanted to turn their worries and problems over to a higher power to relieve themselves, to “go clear.” They wanted something that would help the world make sense to them. In that regard, are Scientology and its followers much different than those of any other faith? I didn’t feel like Gibney was judging, but leaving it up to viewers. Yet it seems difficult not to sympathize with these people.

The key difference seems to be that what begins as an unburdening, as a mental and psychological cleansing, turns into a form of punishment as followers are made to submit to the auditing process repeatedly and coaxed into revealing deeper, more personal memories, some of which could even be incriminating. (During the film, it’s mentioned that John Travolta, one of Scientology’s most famous members, once thought about leaving the church. But the leadership had information from his audits that it threatened to reveal if Travolta left. Those audits become blackmail material for many followers.)

For some, like actor Jason Beghe (Chicago Fire), the structure of Scientology also feeds into a competitive nature. If you do this, this and this, you’ll move up to the next level. Beghe even brags that he was ahead of Travolta on the Scientology totem pole at one point.

But Beghe and many others like him eventually reach the higher levels of the religion, where you find out all the goofy stuff that you’ve probably heard about Scientology over the years. Like the galactic overlord Xenu, volcanoes, hydrogen bombs and Thetans, the aliens that latch onto non-believers and corrupt them, but are cleansed from your soul with Scientology. Haggis confesses during the film that he read this from the handwritten notes of founder L. Ron Hubbard and thought “What the fuck is this?” Yes! OK, because I was thinking that too, man.

The second half of Going Clear is where Gibney really explores some of the weirder aspects of Scientology, most of which you’ve likely heard at some point or another. Especially in regards to Tom Cruise. As you might expect, the actor does not come off looking good in this movie. Cruise seems out of touch and slightly crazed, largely because he lives in a bubble that was created for him by Miscavige and his institution. 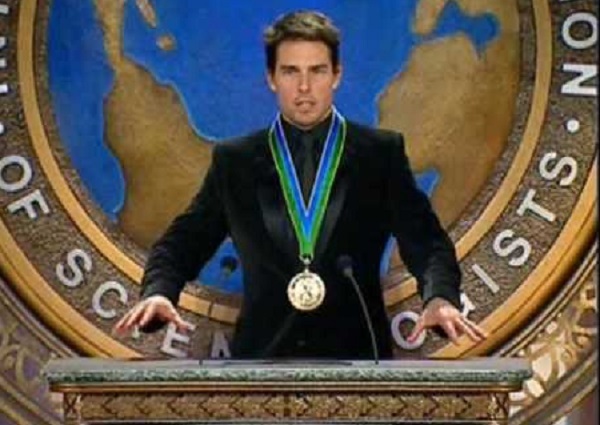 One of the more compelling, yet undeniably hilarious, scenes in the film depicts Cruise being awarded the IAS (International Association of Scientologists) Medal of Valor, which appears to be a completely bullshit honor created to thank him for being such a great spokesperson for Scientology (and presumably a very big donor). The ceremony takes place on a ridiculously adorned stage that would embarrass just about any set designer. The video congratulating Cruise has trumped-up production values inferior to what you see on YouTube these days.

Yet Cruise seems so sincere in his gratitude and emotion when he accepts the award from Miscavige that it’s virtually impossible not to laugh. Wow, he is really, really buying into this. And of course, he is. That’s really the whole point, isn’t it? Cruise is getting anything and everything he could possibly want out of Scientology. No wonder it’s the religion he’s chosen. Consequently, Miscavige treats Cruise like a king because he’s unwavering in his faith, exceedingly loyal and a staunch defender.

From there, the film takes a darker turn as you see the other side of Scientology, what happens when you leave the church. Or even worse, what steps the church takes against those who speak out against its practices. Internet smear campaigns, dividing family members against one another, harassing visits to people’s houses and invasive surveillance campaigns. It’s ugly, ugly stuff.

If there’s a bright side, it’s that people like Haggis, Rathbun and Rinder legitimately seem happier now. Video of Rinder from 2007 is especially jarring compared to the man you see now, because his cheeks and eyes are sunken. His role with Scientology and having to defend the church was obviously taking a toll on him. Those who feel duped now, well, see things more clearly. But getting out of Scientology prison did come with a price. Almost all of the defectors have become estranged from loved ones still with the church, who were encouraged to separate from “suppressives.”

Some might be disappointed that Gibney doesn’t provide as many answers as you might expect. Part of that is because there were only so many people willing to talk to the filmmaker. And if you’ve read about Scientology online or in magazines, there’s not much here that you likely haven’t already learned. (Though I’m guessing the physical tortures, prison camps and humiliating practices like forcing those who have strayed to clean bathrooms with toothbrushes will be new to you.) But Going Clear is illuminating. This stuff takes place in the world we live in. That’s what makes the film so scary.