Nicolas Cage almost played Superman. Those of you that follow such things online likely already know that, but many still might not. Yet it really nearly happened.

The movie was called Superman Lives and was to be directed by Tim Burton, with production geared toward a 1998 release. Based largely on the popular “Death of Superman” story arc from DC Comics in the early 1990s, the project was deep into development and just weeks away from being filmed. Characters, costumes and sets were designed. Actors were cast. Locations were scouted. (Pittsburgh would have been Metropolis on screen.)

But by 2000, Superman Lives was dead. Warner Brothers pulled the plug on the project, citing budget concerns, script changes and a likely fear that, much like Burton’s Batman Returns (1992), this wasn’t going to be a kid-friendly summer blockbuster that lent itself well to merchandising.

Kevin Smith virtually made a career out of telling the story of his experience writing the script for the film. Smith got big laughs on his Q&A comedy tour, sharing details of his conversations with producer Jon Peters, who said he didn’t want Superman to fly, didn’t want him in the red-and-blue suit, and that the Man of Steel had to fight a giant spider in the script’s third act. Oh, and Peters apparently thought Sean Penn would be a great Superman because he had the eyes of “a fucking killer.” 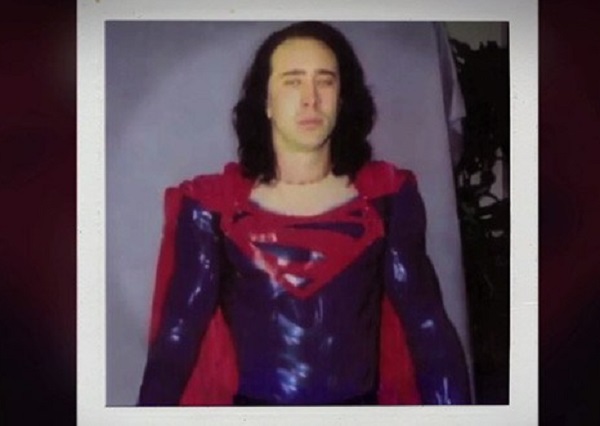 Yet with the surging popularity of superhero films, with costumed heroes essentially taking over pop culture (especially at the movies), there’s been a lingering curiosity over the one that didn’t get made. The question of what might have been became even more intriguing after the disappointment of Bryan Singer’s Superman Returns in 2006, the film that essentially rose from the ashes of Burton’s failed project.

In recent years, that curiosity was ignited once again as a photo of Cage in a Superman test costume circulated online, an image that basically confirmed the worst nightmares about Burton’s movie. Naysayers already doubted that Cage fit the square-jawed, idealized profile of the Man of Steel, but with the long hair he was sporting in the photo (resembling a bad Elvis impersonator), along with the Superman’s “S” logo stylized nearly beyond recognition, the sentiment seemed to be that we dodged a cultural bullet by this film never being made.

Yet interest in this never-made film just wouldn’t die, further stoked by photos and test footage of effects work done on a translucent, light-up suit that Superman was to have worn at some point in Superman Lives. Though the result by Steve Johnson and his team was impressive (especially from a practical standpoint) and might have been cool to see in some other sort of fantasy film, it looked so different from our idea of Superman that fans again wiped their brow with relief, thankful that this movie had never been made.

Yet the Cage photo and Johnson footage really only whetted the appetite of those who wanted to know more. If Superman Lives was as close to getting made as these details and other rumors suggested, there had to be so much more hidden away in archives that hadn’t been released for public consumption: Concept art, updated scripts, additional photos, etc. And everyone associated with the film — the designers, artists, writers, producers and actors — was still around to talk about it. Why hadn’t anyone ever interviewed Cage or Burton about this movie?

Fortunately, a filmmaker with the exact same questions and raging curiosity took it upon himself to try and discover more about Superman Lives, perhaps dispelling some of the myths attached to the project over the past 15 years.

Jon Schnepp, who’s worked as an animator, producer and director on shows such as Space Ghost Coast to Coast, Aqua Teen Hunger Force and Metalocalypse (and also directed a segment for The ABCs of Death anthology), presumably used his connections in the movie industry to help get in touch with the many concept artists, costume designers and screenwriters who worked on the film, turning those conversations and the information they yielded into a documentary, titled The Death of Superman Lives: What Happened?

Schnepp started Kickstarter and Fanbacked campaigns to help fund the project, and once word of the documentary began to build, he was able to score interviews with Peters and Burton for the film, as well as raise money to animate and film sequences from the script.

(Full disclosure: I contributed to both the Kickstarter and Fanbacked campaigns. If you actually take the time to comb through the many, many names of contributors in the credits, you’ll find me there. I’m not sure if that makes me biased toward the film because I wanted to see it made so badly, or biased against it because I wanted to see what was done with my money.)

The Death of Superman Lives: What Happened may not have the polish of a documentary like Jodorowsky’s Dune, but Schnepp presumably didn’t have the same budget available to him. As a result, the visuals and narrative of the film are lacking in some places. (At times, I felt like he leaned too much on how strange a person Peters is. One sequence in which the producer takes a phone call during his interview doesn’t need to be in there.) However, Schnepp makes up for that with the sheer amount of information he’s able to find and the interviews with those involved in the development process.

As Schnepp himself says, he found the holy grail of test footage for Cage’s various Superman costumes. And though the test from which that infamous photo came from is included in the film, there are clips from subsequent tests which show that the costumes wouldn’t have looked as radically different as feared. By the end of the story, Cage essentially would have been wearing the Superman outfit that we’re all familiar with, just modernized with molded musculature and materials. (Personally, I think it looks better than what Brandon Routh wore in Superman Returns.)

(One myth Schnepp manages to dispel through his research is how much of a role the aforementioned light suit would have had in the movie. It would have been used in a two- or three-minute sequence during which Superman — who had been killed during the story — was being revived in an alien nutrient bath.)

Unfortunately, Schnepp wasn’t able to speak with Cage for this film. But snippets from junket interviews in which he talked about nearly playing Superman along with the costume test footage compensate nicely for that absence. We can see how enthusiastic he was about playing the role (footage of Cage trying out his Clark Kent look is also available) and deconstructing the character to create a new spin, telling the story of a hero who realizes he’s an alien and feels like he doesn’t belong. 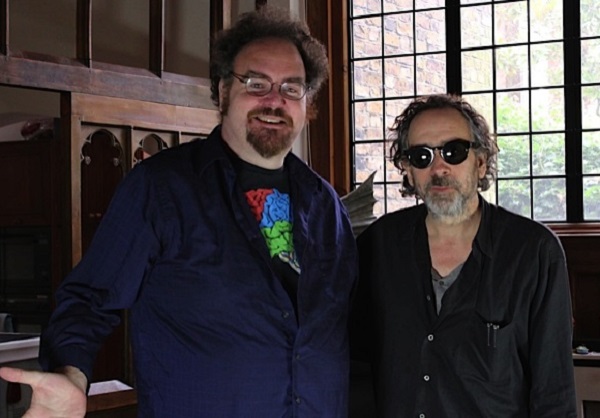 In a way, not talking to Cage maintains a level of mystery for Superman Lives. Maybe we know all we need to know from what Schnepp was able to uncover.

Besides, Schnepp finds almost everyone else associated with the film to make up for it. Several concept artists talk about the sets they drew up and the various alien monsters that were brainstormed during the development process. In addition to Smith, screenwriters Wesley Strick and Dan Gilroy share their views on the script and the direction it would have taken. Johnson and Colleen Atwood reveal the various iterations of the costume and how they were trying to update a classic, yet outdated look (the red underpants).

And Burton himself recalls the many headaches he had to deal with (especially from Peters), in terms of what he wanted versus what the studio wanted, the story he was attempting to tell, and what could feasibly accomplished on screen in the late 90s. This unquestionably would have been a Tim Burton film, with all sorts of freaky settings and creatures (Brainiac having a spider-like body is Burton at his best), along with an alienated protagonist who wonders if he truly fits in the world he lives.

Maybe Superman Lives would have been a disaster that set back superhero movies even further than 1997’s Batman & Robin did. (The failure of that movie played a role in Burton’s film.) But it also would have been unlike anything we’d ever seen before, and certainly would have provided a new look at a character who many feel is boring because he’s so upright, moral and powerful. Perhaps Superman Lives was just ahead of its time and might seem welcome during an era in which so many superhero films are beginning to feel the same. More than likely, however, fandom and internet outrage would have slaughtered the attempt to try something different. I’d like to think I would have applauded the effort.

The Death of Superman Lives: What Happened? can be purchased for streaming viewing or Blu-ray and DVD at TDOSLWH.com, and the first 10 minutes of the film are available for viewing.