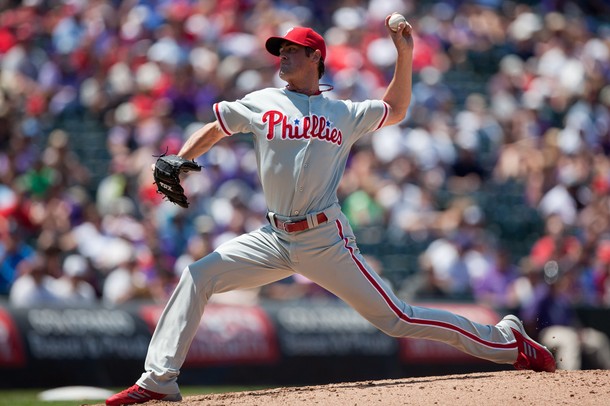 Ken Rosenthal is reporting that the Philadelphia Phillies are extremely close to signing starting pitcher Cole Hamels to a contract extension, nixing the possibility of Hamels being dealt by next Tuesday's trade deadline. The reported contract is for six years and $137.5 million, and will be the second highest ever rewarded to a pitcher, behind just CC Sabathia's monster contract with the Yankees in December of 2008 (which went for seven years and $161 million).

Hamels was due to be one of the top starters on the trade market, as well as the free agent market this winter. The Phillies wanted to keep him in order to keep their "big three" of Hamels, Cliff Lee, and Roy Halladay together. Well, it looks like they have, but the cost might be a little rich for their blood. The average annual value of this deal is a hair under $23 million, but I assume it will be backloaded to nullify the immediate impact on Philadelphia's payroll. Before the Hamels extension, the Phillies had $112.6 million already guaranteed to next year's payroll thanks to eight figure guarantees to Lee, Halladay, Ryan Howard, Chase Utley, Jimmy Rollins, and Jonathan Papelbon. Hunter Pence will also be entering his final year of arbitration and will command eight figures as well, and the team's payroll could easily top $140 million on just eight players.

Because of the team's lack of success this year, I'd imagine that they'd look to move a contract or two as opposed to going into next season with another massive payroll. Pence seems like a guy that could get dealt, but would a team really be willing to pick him up for a a year and a half, and pay him upwards of $15 million for that time? If so, the prospect return coming back to the Phillies would likely be minimal, and the team would essentially just be dumping his contract. The same scenario may be true for center fielder and free agent to be Shane Victorino, making $9.5 million this year and likely looking at a raise in free agency next year. If the Phillies don't move either player, they'd still need to fill Victorino's spot in center field as well as fill a rotation spot, as Joe Blanton and his $10.5 million salary are also hitting free agency.

Man. I know the team really wanted to bring Hamels back, but this cost might have even more ramifications on the team. The Phillies are seriously running the risk of having $80 million tied up in four pitchers next year, and $46 million tied up in three aging infielders. It's going to be very interesting to see what happens with this team in the coming days.

UPDATE: The deal is official, reports Ken Rosenthal.Six years, $144 million with a club/vesting option for 2019.