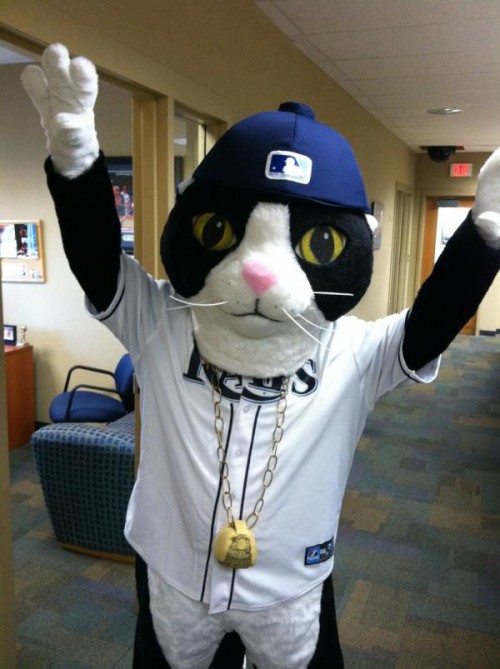 Per Tampa Bay Rays’ spokesman Jonathan Gantt’s Twitter account, the Tampa Bay Rays are going to be getting a new mascot next season which is not a stingray, a ray of sunshine, or even named Ray much to my dismay.

The monstrosity you see above is called DJ Kitty. DJ Kitty for all intents and purposes appears to be the hippest cat in all the land. Look at him, waving his hands in the air like he just doesn’t care, not unlike the Rays’ fanbase minus the whole waving their hands in the air thing. Plus like any self-respecting mascot, he has a Twitter account, @raysdjkitty.

Video of a cat rocking the turntables after the jump, I promise.

According to Yahoo!, DJ Kitty isn’t an altogether unfamiliar sight to Rays fans…they’re just not used to seeing him in non-scoreboard per fashion.

“Still puzzled about this pussycat? Well, it’s apparently a real-life representation of “DJ Kitty,” which had been a scoreboard gimmick for the Rays the past couple of season. Basically a hybrid of the Rally Monkey and Keyboard Cat, DJ Kitty has experienced varying degrees of success.  Cork Gaines claims the “housewives and college co-eds” love DJ Kitty, while we wereeager to call animal control after he (her?) angered the baseball gods during the 2010 ALDS against the Rangers.”

But where Big League Stew sees a hybrid of the Rally Monkey and Keyboard Cat, I see something completely different when I look at DJ Kitty. Yeeeahhhhhh boyeeeeeeee!

Ok, so he doesn’t have the super sweet grill or the rings around his little paw (though note to the Rays’ marketing department: that would be a nice touch). No word on what DJ Kitty’s introduction means for the Rays’ current mascot, a chubby fellow named Raymond who looks like one of Youppi’s distant cousins.

As TOC’s official mascot correspondent (because I used to, you know, be one) I applaud the Rays’ efforts in bringing a beloved scoreboard character onto the field. It worked extremely well for my beloved Brewers, who turned the sausage race from a scoreboard game into a must-see live action show, and if done right this new DJ Kitty should work out well for the Rays as well.